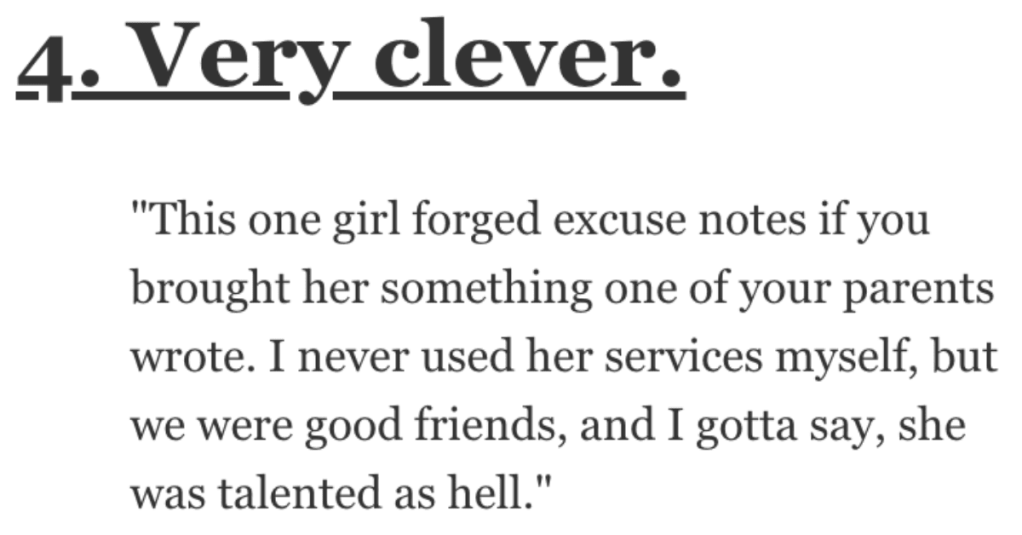 What Was the Weirdest Blackmarket in Your School? People Responded.

I had a friend in high school who had his hand in pretty much every illegal activity that was going on around the campus.

Fake IDs, programmed satellite dish cards, selling weed and booze. The guy was like the kingpin of our high school…and he never got caught!

Did you have a weird black market at your school?

See if they match up to the ones that AskReddit users shared.

“Mountain Dew and Pepsi had a contest where college names were printed on the inside of the bottle caps.

If that school won the NCAA March madness tournament, you could send it in for the jersey of your choice from any school. Suddenly, a black market for caps with blue chip schools was born.

I remember selling a Duke cap for $10, then turning around and buying 10 drinks from the vending machine.”

“My friend in high school had like a prepper grandad waiting for Y2K. He literally had crates filled with cartons of offbrand c**arettes. So my friend would steal a few cartons, bring them to me, and I’d sell them out of my locker.

I only kept like 6 packs in a pencil case, 5 whole and one open for the loose ones to sell, in my locker at a time. He’d have the rest in his locker at the other end of school and I’d just go refill as needed between classes or at lunch.

One time a teacher called the cops because I was acting suspicious. They pulled me out of class and brought in a drug dog to search my locker. I’d just sold my last loosey and pack like 10 minutes before that. The dog didn’t find anything but they cops went through everything anyway.

When he opened the pencil box, there were little shreds of tobacco inside. He asked “whats this” and I said “well its a pencil box, I’d guess its probably pencil shavings” and he just shrugged and put it back.

Went right back to selling c**arettes the next day.

Oh! I’d also trade 1 loosey for a meal ticket (that’s how our lunch system worked) and would also sell the meal tickets for $1 each and split that with my buddy too.

I went to a religious school where books that had magic or fantasy was banned. Parents of these kids were just as religious so kids couldn’t get them from their parents.

Mom didn’t care and she let me buy a few for some friends and then more kids started requesting them.

Charged double for what they were worth and the kids were more than happy to pay.

Most popular requests were: Harry Potter, Lord of the Rings and Cirque Du Freak series.”

“This one girl forged excuse notes if you brought her something one of your parents wrote.

I never used her services myself, but we were good friends, and I gotta say, she was talented as hell.”

“There was a p**n tape (VHS days) that used to do the rounds.

There was a booking system and everything.

You couldn’t have it for more than two days.”

“A teacher at my high school that I refuse to rat on would take money from students and buy them lottery tickets/scratch-offs in exchange for a cut of any prize $50 and up.

I think the dude legit made a few thousand dollars off of this just during my senior year. And it made the students love him.”

7. Had a whole system worked out.

“One of my friends sold Starburst from his locker. 10 cents for 2.

“In early elementary school we had a market for mud.

Different groups of kids would claim areas around the school as their mud pit and put their brand of mud in ziplock bags to be traded with other groups for different bags of mud. We were the clay mud group and I had about 3 kids in the muck scooping it into bags or running to the water fountain to get fresh water to make more mud on dry days. I would be the one to go make the deals with the other groups.

We traded alot with the gravel mud group because “clay mud” and “cement mud” are both good for building or some s**t… Who knows? It made so much sense at the time.

The principal and staff eventually stepped in to end it because all the kids came back to class filthy every day and giant holes littered every field and playground.”

“I had a friend that used to bring a bunch of coke cans from home and then sell them for a dollar at lunch.

Cheaper than the vending machine prices and so it became like a little business.

He eventually saved up enough for a longboard.”

My school canteen doesnt have any salt with chips (or fries to Americans) and people used to sell salt packets.

The most expensive offer I could find was 50 pence for a packet or 1 pound for three.”

You got 1 if it was your birthday or if you did something that a teacher decided was “exemplary.” People would pass them around asking for favors down the line.

Some kid found the paper used to make the tickets and xeroxed multiple pages of the tickets. He became our kingpin and ruled for a couple years.”

“I used to sell bags of sugar and kool-aid. Like bootleg lick-em sticks.

Also sold red hot toothpicks I made from cinnamon oil. When I got into high school, my family was one of the first to get a computer. I made a killing from printing out fake report cards.

I was quite the entrepreneurial little s**t.”

Did you have any weird black markets at your school?

If the answer is YES, please tell us all about them in the comments.