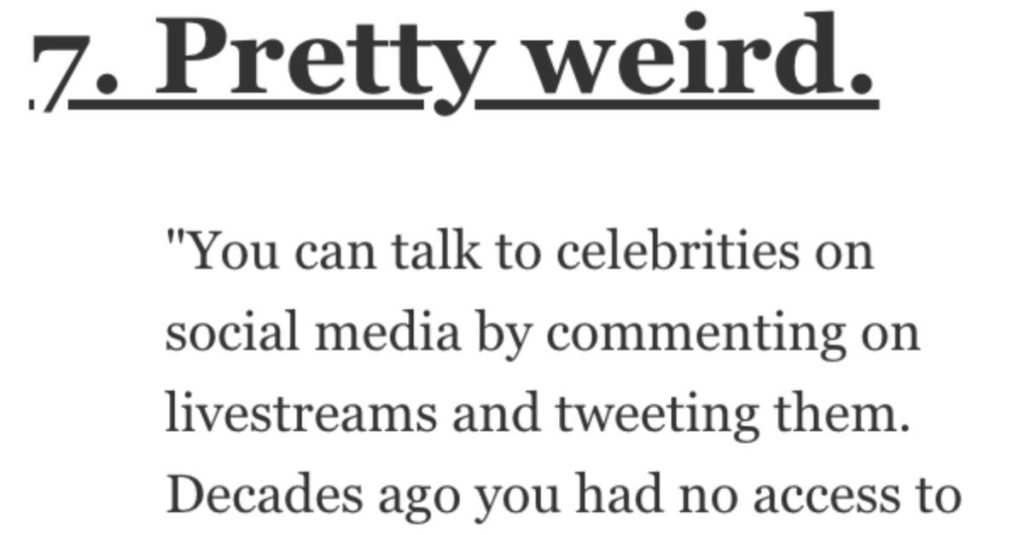 What’s Acceptable Now That Wasn’t When You Were Growing Up? People Shared Their Thoughts.

I had an intern at a job about 10 years ago and she was in her Freshman year of college. She was very bright and we’d talk about all kinds of political and social issues and she told me that when she was a Senior in high school, they had a gay prom.

I shouldn’t have been surprised, but I was, because that kind of thing NEVER, EVER would have happened when I was in high school.

And hey, I think it’s great!

It means that society is progressing in some ways and people are more accepting now than they were several years ago.

What’s acceptable now that wasn’t when you were growing up?

“Not answering the phone. When we only had landline phones (yes, a long time ago), there was no ringing phone that went unanswered.

Now we screen or just plain ignore calls until we are good and ready to deal with it.”

It used to be girls could get their ears pierced, and that was it.

When I was in high school, some guys started doing the one earring look and tongue, nose and bellybutton piercings were starting to become popular.”

“Wearing sneakers to work at a fortune 100 company.

At the beginning of my career it was suit and tie, then business casual and now I wear Stan Smiths, jeans and an untucked polo in the most senior position of my working life.”

“Middle/high school students being allowed to have their cell phones in class.

Being caught with our cell phone when I was a high schooler was an automatic detention.”

“Any type of hair coloring would result in serious trouble at school.

I also remember tattoos being frown upon as being found mostly on people that got out of prison.”

“Speaking as a man with dwarfism, the general public perception of little people has changed dramatically since I was a kid, and I’m not even that old (28).

If you had told me back then that there would one day be a dwarf actor who is described as a s** symbol and becomes a household name, playing a complex and human character on the biggest show on television – I would have called complete bulls**t.

All there was back then in the zeitgeist was oompah-loompahs, mini-me, and munchkins. That was it. The idea of us even being fully dimensional people (people that have s**, relationships, dreams, fears) was just not there. We were just punchlines in comedy routines and non-human curiosities in media.

“You can talk to celebrities on social media by commenting on livestreams and tweeting them.

Decades ago you had no access to them at all unless you personally knew them, were related to them, or won a chance to meet them.

They were considered untouchable. Now if they do something stupid, you can let them know in minutes.”

“Spent my whole life being taught to never get in a stranger’s car.

Now we have a whole business model built around it.”

Now we put everything on the internet.”

“Saying you met your significant other online.

When I was in high school, I only knew one guy who said this (and the girl was in another state). His social standing plummeted.”

“I swear to the gods that all of the fashion that was mocked and made fun of in the 80’s and 90’s is now what’s cool.”

Even when I entered the workforce in the early 2000s it was common for company dress codes to include a “no visible tattoos” policy.”