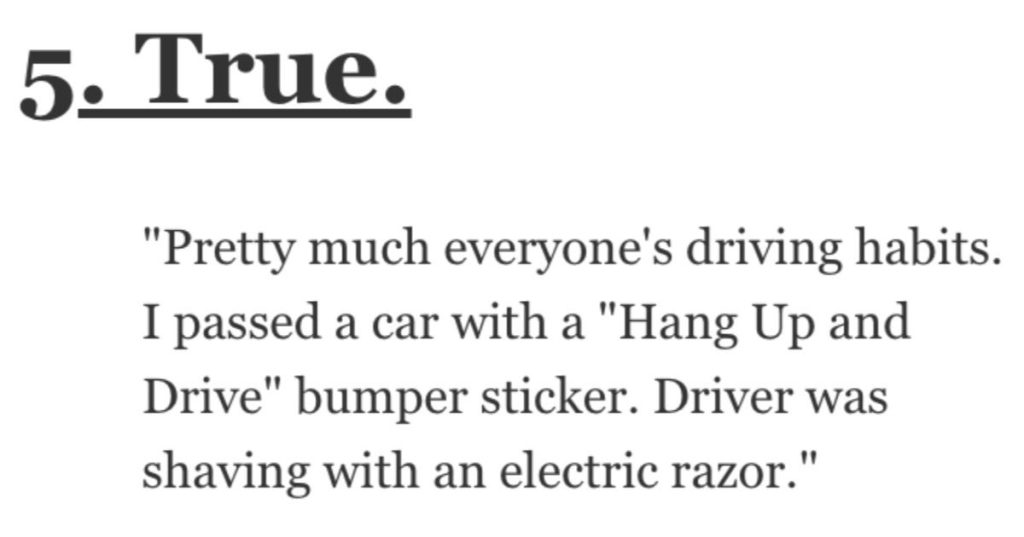 What’s Illegal but People Do It Anyway Without Consequences? People Shared Their Thoughts.

Laws can be funny.

Some that don’t seem all that important are cracked down on by authorities relentlessly while others that appear to be pretty serious don’t seem to be enforced much at all.

And today we’re gonna hear from people on AskReddit about things that are illegal but people do them anyway without consequences.

1. Over the legal limit.

“Hauling more than the legal weight limit in dump trucks.

I did a project a few years ago for my former employer because they noticed ALL the contractors that they hired were carrying more than the legal weight limit. This is a big issue because these trucks have increased stopping distances and are more likely to injure/kill people in the cars they hit.

My company was p**sed because they didn’t want to be legally responsible if there were an accident. They had me analyze how much it would cost to buy a fleet of dump trucks, but it turns out you can’t make much money hauling at the legal limit, so all dump trucks carry like twice the limit and just take the fines when weigh stations are open because it is WAY cheaper.

Pretty messed up. Honestly, I felt like I did humanity a disservice telling them it wouldn’t be worth it.

If you ever get hit by a dump truck you can almost certainly sue them for being above the weight limit, but nobody really knows this.

Note: This depends on the legal weight limits in your region, but I know this to be true for most of the Northeast US.”

“Tell their employees they can’t talk about their wages with coworkers.

Yeah, they make you think that. It’s very good to talk about wages.

They’ll pay you as little as they can.”

Depressed areas or cities typically have high volumes of litter. I own a company that does some FHA and HUD things, and we go to many of these cities.

You can just drive down the road and watch people throw trash out of their cars. They live there and that is just crazy to me.”

“People pulling into intersections without being able to exit the intersection (too much traffic in front of them).

I was stuck at one light for 10 minutes a few days ago, because people kept blocking traffic this way.”

I passed a car with a “Hang Up and Drive” bumper sticker.

Driver was shaving with an electric razor.”

Everybody should be able to accept bribes, not only them!

“Airbnbs are illegal in my town, because there is a housing crisis.

People who don’t live here were buying 4 houses at a time, evicting the tenants and turning them all into Airbnb’s, leaving nowhere for families to live. Our homeless population went up by a solid 10%.

Once our homeless population goes back down in numbers they may consider lifting the ban, but I doubt it.”

8. Does anyone actually do this?

Where I live, if you buy something in another state without sales tax, but bring it back to your home state, you have to send your home state the tax you “should have” paid if bought locally.

Even if it’s pants.

Let me get right on that…”

“Parking in such a way you don’t just have a wheel on the curb, but actively block the whole pavement.

A wheelchair using neighbour gets so fed up of it and I can’t blame her.”

Yet we keep bailing out and supporting the financial institutions that enable, support and participate in it.

I’d like to also add insider trading. Ontop of that politicians trading on non-public knowledge should be illegal but isn’t.”

Politicians doing s**t that would get us arrested.”

Stealing a million dollars from your employees by shorting their hours and doing other intentional labour code and other violations should be treated precisely as harshly as an employee walking out with the safe with a million dollars in it.”