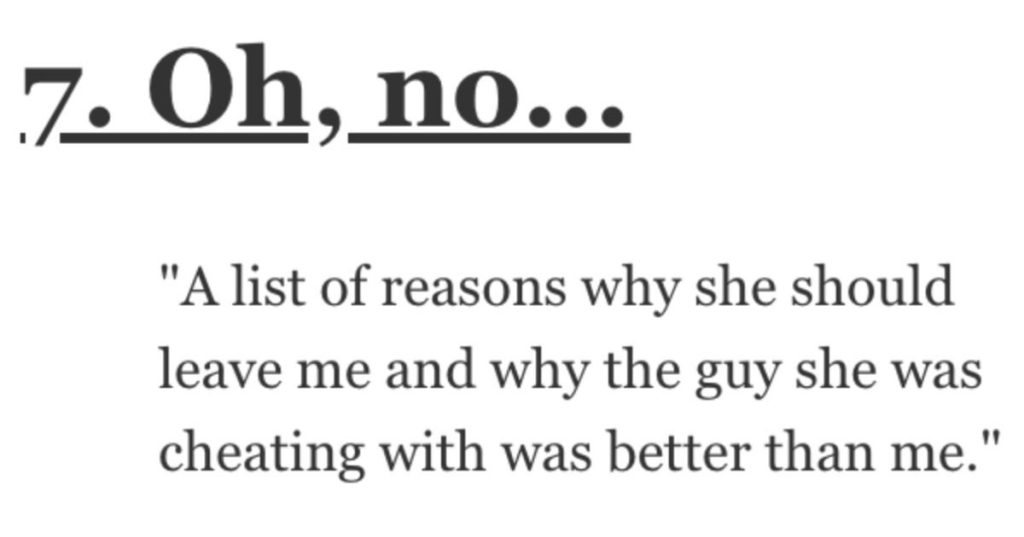 What’s the Most Shocking Thing You Found in Your Spouse’s Possession? People Shared Their Stories.

Are you a snooper?

You’re a snooper, aren’t you…?

Well, let’s see if the things you’ve found in your spouse’s possession measure up to what these folks found.

“When my husband passed I found a garage door opener in his car.

We don’t use one and neither did his work parking.

I have no idea what garage it opens.”

“A notebook full of beautiful sketches of trees, rivers, landscapes, animals, and people.

He didn’t tell me he was an artist, so I was a bit shocked to find out that he was so talented.”

“A rubber crab. My wife is freaked out by crabs.

Apparently her mom has been hiding it in her stuff for years to scare her and has become a game between them of hiding it somewhere the other person will eventually find it.

Occasionally I’ll be looking for something and stumble across it in a new place. First time I found it was in the dog treats 2 years into our marriage and was very confused because she had not informed me of their game yet.”

“When my husband passed away in a workplace accident he was in another state. When I got his belongings there were answering machine messages from a woman thanking him for being so amazing. And for dinner, etc.

Then on his computer was emails and text messages from several women. I was pregnant and dealing with his death already. Then suddenly I had this anger at him that I could obviously do nothing with. Everyone told me you can’t be mad at a d**d person. But it was confusing.”

Had been together a year and lived together 2 months. He hadn’t told me as was embarrassed but didn’t change the way I felt about him at all.

Just had to reassure him that it isn’t embarrassing.”

“A pickled baby that was supposedly his “4x great uncle” that was stillborn when his family was involved in a scientific field.

It’s in his basement and I refuse to go anywhere near it.”

“A list of reasons why she should leave me and why the guy she was cheating with was better than me.”

“There was an old report that he had written in probably the third or fourth grade which would’ve been the early 90’s.

It was about stallions (because bill and Ted I’m assuming) and on the first page it said “wild stallions natural enemies are wolves and semi trucks.”

Oh that poor man, the kids absolutely loved the entire report and they still haven’t let him live that one down. He’s lived on a farm his entire life and knew nothing about horses.”

“Six credit cards in my name I didn’t apply for.

New accountant pulled a Columbo and busted the soon to be ex after discovering 60k in hidden CC debt. Cut up all the cards in her wallet right there in her office and handed me the biz card of an attorney client she recommended.

“You’ll be glad you did” was all she said as I got up to leave. She’s still my accountant after 23 years.”

“A short note I had written her on our 3rd date. Apparently I was waiting in her car for her to come out of work so I wrote a short note about how much fun I am having dating her and how gorgeous she always looks.

It was late in the evening so I stuck it in her sunglasses case for her to find at a later time that week. Okay this was like from 15 years ago. D**n I was romantic.”

“My ex used to keep water bottles filled with vodka in her purse.

She worked at a day care.”

“A collection of dolls. Like hundreds of them, all types, most made of cloth/stuffing, some plastic, some glass, some beanie baby style, but all “human”, no fantasy or animals allowed.

Apparently she had been collecting them as a child and kept it going. So when we visits a new city, country, she will get a doll or something that is from that area. We dated for like 4 years before we got married and I didn’t know she had this many.

Her apartment just had a room that she called the doll room and I never really questioned it. Now I have a room I call the collection room so i don’t have to explain to people why I have hundreds of dolls and that my lovely wife is not creepy despite having tiny figurines.

So i didn’t feel as weird springing on her my massive comic book and Star Trek collection. Our kids are going to have to deal with some s**t when we d**.”