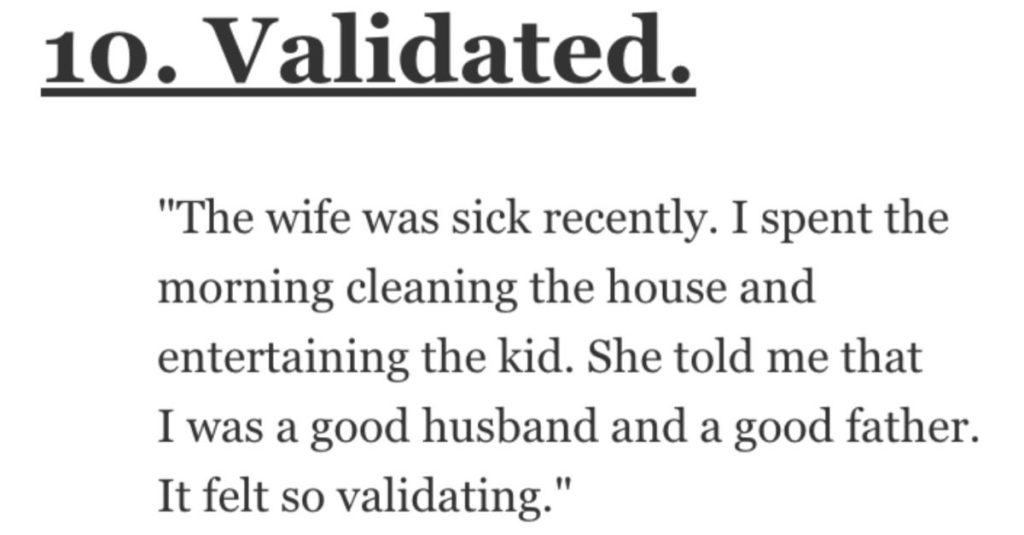 What’s the Best Thing a Woman Ever Said to You? Guys Responded.

When was the last time someone said something to you that really made your day and made you feel great about yourself?

So let’s hear from men on AskReddit about the best things that women ever said to them…we think it will brighten your day.

“I was in Nashville for a work conference and was walking back to the hotel one evening. A couple of women were sitting on some steps across the street from me when one of them yelled, “hey white boy!”

I stopped and turned towards them, then she yelled again, “you fine as f**k!” I thanked them, then immediately called my wife to tell her I’m officially fine as f**k.”

“I recently got out of treatment and I got really close with the women there.

When I was getting ready to leave they went on and on for minutes about how kind, loving, genuine, etc. I was.

It brought me to tears. After years of addiction and ha**ng myself, that hit hit me so hard.”

Said to me by my now-fiancée.”

“A friend when I was younger gave me a birthday card that said something like “I’m glad you exist”.

It was such a simple thing but I guess no one had ever really said that to me before. It meant the world for some reason.

Naturally I fell head over heels in love with her shortly afterwards but that’s a different story.”

After a surprise proposal to my now fiance that she had absolutely no idea was coming.”

“Recently I visited a buddy from elementary school. I went down to celebrate his 30th and him buying his first home to raise his new family in.

When I got to meet his wife, she told me she heard all about me and I was the only person buddy was talking about for the past week.

Maybe not the BEST thing I got, but it really struck a chord in me that I have a pretty awesome friend.”

“I was getting rejected from a bunch of psychology doctoral programs, and I was at an all time personal low.

My wife, who pushed me to pursue school and stop breaking my body in factory jobs, said something that I’m ashamed to say I don’t remember verbatim. But to paraphrase:

If all you ever do is fail, I’m proud of you for trying.

I never did get into a program, I abandoned Psychology and started learning programming, and now I’m a software engineer. But if she hadn’t supported me through those times, I’d probably be destroying what’s left of me in some warehouse. I would never have thought enough of myself to reach higher without her support.”

“I don’t think I’ll ever get tired of being called “beautiful”, be it in English, Spanish, or French.

It may be such a small thing but every time one of my friends says it to me, my heart just melts. I’m very thankful to have met them.”

“The wife was sick recently.

I spent the morning cleaning the house and entertaining the kid.

She told me that I was a good husband and a good father.

It felt so validating.”

It’s both fascinating and sad and the same time.”

“One women once told me that I looked cute with my beard.

I still look at that message from time to time whenever I’m feeling down.”

Has someone ever said something to you that gave you goosebumps?