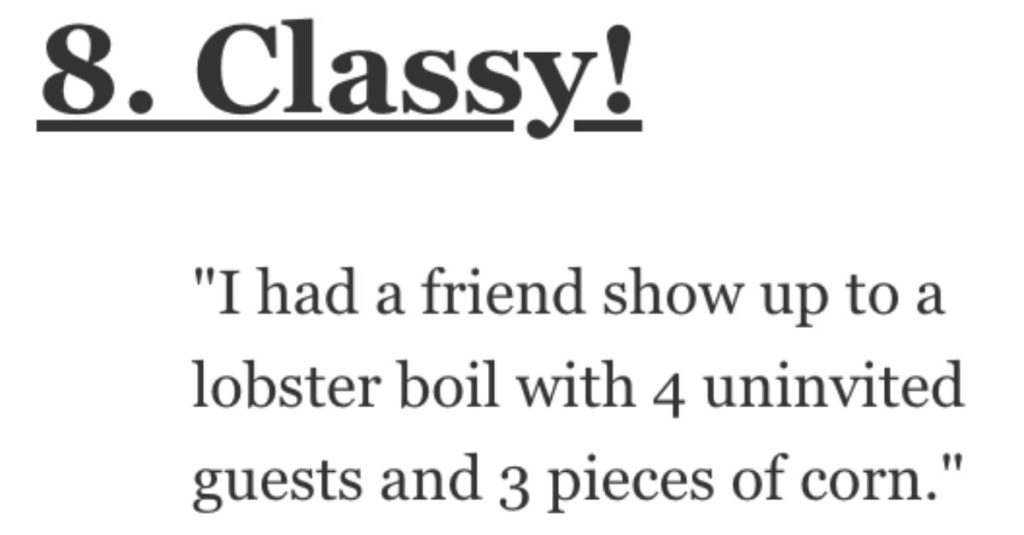 What’s the Most Passive-Aggressive Thing You Can Bring to a Potluck? Here’s What People Said.

This is gonna be hilarious!

And I can honestly say that I’ve never heard or even thought about this question before.

So let’s see what folks on AskReddit came up with!

Friend of mine gave me a whole pack of them once when he worked there.

The shock on everyone’s face was priceless.”

“Someone in my grandmas garden club brought 8 deviled eggs to a potluck and my grandma started calling her “four eggs” behind her back.

“I once had a friend (who volunteered to bring meat) show up to a potluck BBQ with two steaks, for her and her husband, and an 8-pack of hot dogs for the other 20ish guests.”

“Exactly whatever the host/hostess plans to make for their signature dish.

Especially if you make it better.”

“My co-worker brought one packaged loaf of bread, unsliced.

He had signed up for vegetables.”

“We went to a thanksgiving dinner where everyone was supposed to bring something.

The guy who was supposed to bring mashed potatoes walked in with a bag of spuds. Not cooked or anything. Just raw. Twenty minutes before dinner.”

“I had a friend show up to a lobster boil with 4 uninvited guests and 3 pieces of corn.”

“An empty pizza box set out on the table so everyone opens it as they go through the line.”

“For a Thanksgiving potluck my husband signed up for dressing, not realizing that’s what some people call stuffing.

Anyway he brought like 4 different kinds of salad dressing and I’m sure everyone thought he was the worst.”

I used to have a co-worker who’s only contribution to office potlucks was to-go containers for her and her mother.

Tell us what you’d bring to a potluck to p**s some people off.