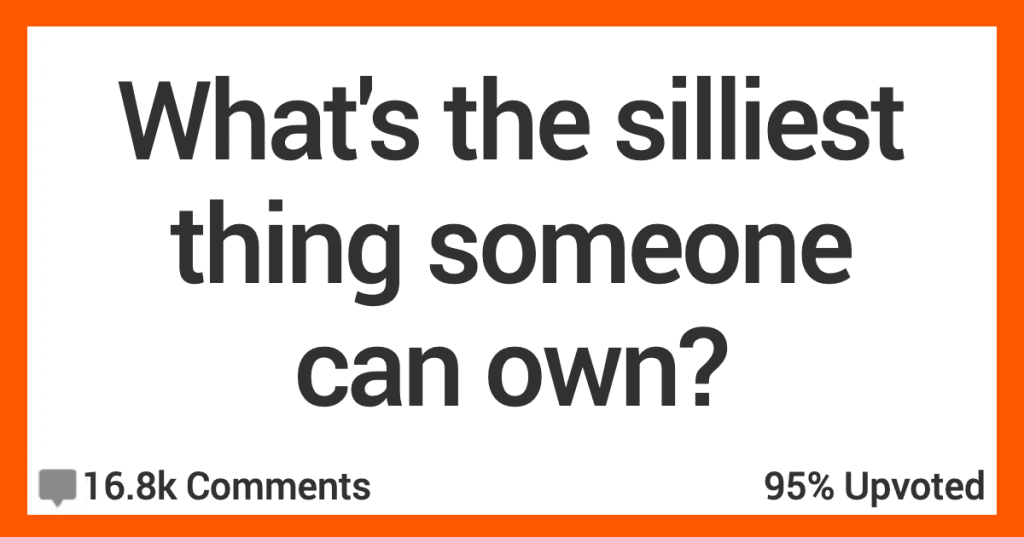 What’s the Silliest Thing Someone Can Own? People Shared Their Thoughts.

Everyone can obviously make their own decisions about what they choose to spend their money on, but you have to admit that some purchases are just downright SILLY.

And today we’re going to hear from AskReddit users about what they think are the silliest things that a person can own.

The first house I bought had these. I told my wife I could easily remove it and replace it once we moved in.

She insisted that it be fixed and replaced before we ever set foot in there. She convinced me and I’m glad she did.”

“One of those peeing Calvin bumper stickers.

It was never in Calvin and Hobbes!

Oh man, some older folks I know paid $20k for a timeshare in Mexico. They were so stoked, they thought they’d gotten the deal of the century. We agreed to accompany them there the next year. They went to go check with the timeshare people to see how much more it was worth now.

They were told the market had collapsed and it was worth about $500. The look on their faces was horrible. BUT, not to worry, for only $5000 they could transfer their interest into a new timeshare that was positioned much better to increase in value which would rescue their investment.

Fortunately they did not go for that. But the way these companies take advantage of naive/elderly people is pretty f**king horrible.”

Purchased for over $500,000, only for Tom Brady to sign with the Buccaneers for another season making the ball essentially worthless.

Makes me laugh every time!”

“A while back there was a little post about someone asking people on reddit to talk them out of wearing a shirt that said “terrorist” on it to the airport.

I nominate that shirt for idiots only ownership.”

“A magnetic energy wrist band thingy, that makes you stronger and more balanced.

I actually really like these, they make it easy to identify idiots quickly.”

Bonus points if they get the bottle opener style.”

“I have about 20 ukuleles. I know zero songs.

I also have bipolar disorder.

This was definitely a manic moment.”

Thinking about the woman who was just photographed walking her pet alligator around who is an “emotional support animal”.”

“Bullet hole decals for your car

True gangbangers don’t want this. They will either have the holes spot welded and painted over or not drive that car again.

This is just an ignorant poser move and anyone rocking these should be regarded as a complete moron.”

“Robin Williams had a bit in his standup about people who bought those shock-belts for your abs and said they should strap it to their heads instead and shock themselves into not buying stupid s**t off of TV.”

What do you think is the silliest thing someone can own?