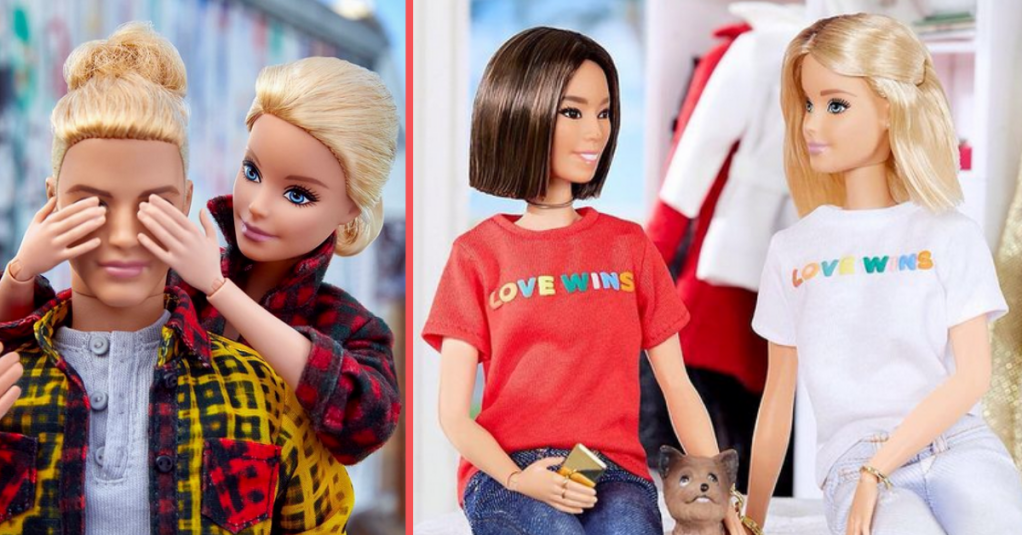 What’s the Truth About Bi Barbie? A Breakdown on the Facts.

It seems like every girl, from Boomers to Gen Z, played with Barbies at some point.

I had three, and for all the complaints about unrealistic body image, my 90s Barbie barely fit into my mom’s doll’s clothes.

Mattel has done a lot over the years to stay relevant and woke, so it’s little wonder that an Instagram post featuring a Love Wins t-shirt got a lot of attention on social media.

Here she is with the K-Pop group BTS.

Back in 2017, the account posted two pictures featuring a collaboration with fashion and interior design blogger Aimee Song.

Barbie and the new Song doll were shown hanging out in matching t-shirts.

Later they enjoyed avocado toast together in a trendy LA restaurant.

Although the photos were first posted years ago, they were recently rediscovered, and they took the Twitter world by storm.

And the question was this… does Barbie have a girlfriend?

The next day, commenters lined up to take sides.

Reactions ranged from excited and supportive to outraged and annoyed.

Many users claimed that they had known all along, thanks to the media-rich Barbie world.

Whether it was the movies…

I watched barbie dolphin magic with my straight friends at a hangout once and even they were like “…. Bruh this is hella gay”

And I’m not saying it was…

why are people surprised that barbie is gay as if this scene doesn't exist pic.twitter.com/t3XqPkXaqJ

Or because of the video games…

I am convinced that the characters from Barbie and the Diamond Castle are girlfriends ??

People are still talking about it.

Not only that, but it turns out Barbie and Ken broke up a really long time ago:

barbie and ken breaking up and then barbie getting a girlfriend is the greatest plot twist of all time? pic.twitter.com/KuFWLVBsmO

The thing is, none of that matters, because Barbie is whatever you want her to be.

The sheer number of people who tweeted that they had made their Barbies kiss, using this gif of Bong Joon Ho at the 2020 Oscars, proves the point.

Barbie has been gay for exactly as long as she’s been straight.

7 year old me sitting in my room making my barbies kiss pic.twitter.com/Hm5jkDKGnT

Not all of the feedback on Twitter was positive, however.

One user even posted official-looking screenshots claiming definitively that Barbie was not bisexual.

But the fact is, Mattel has gone out of their way to make Barbie more inclusive.

She’s meant to represent all girls.

And actually, Mattel doesn’t appear to have made a statement either way.

Like The Guardian reported when the original LGBTQ Youth support initiative kicked off in 2017:

Barbie manufacturer, Mattel did not commented on the doll’s sexuality but told the Guardian on Wednesday that Barbie was an “inclusive brand that celebrates diversity, kindness and acceptance”.

Mattel has increasingly aligned the Barbie brand with progressive causes.

They say gender is a spectrum, and by not not saying it, the truth could go either way.

Maybe the doll in the Love Wins photo isn’t her girlfriend, but it doesn’t mean she doesn’t have one.