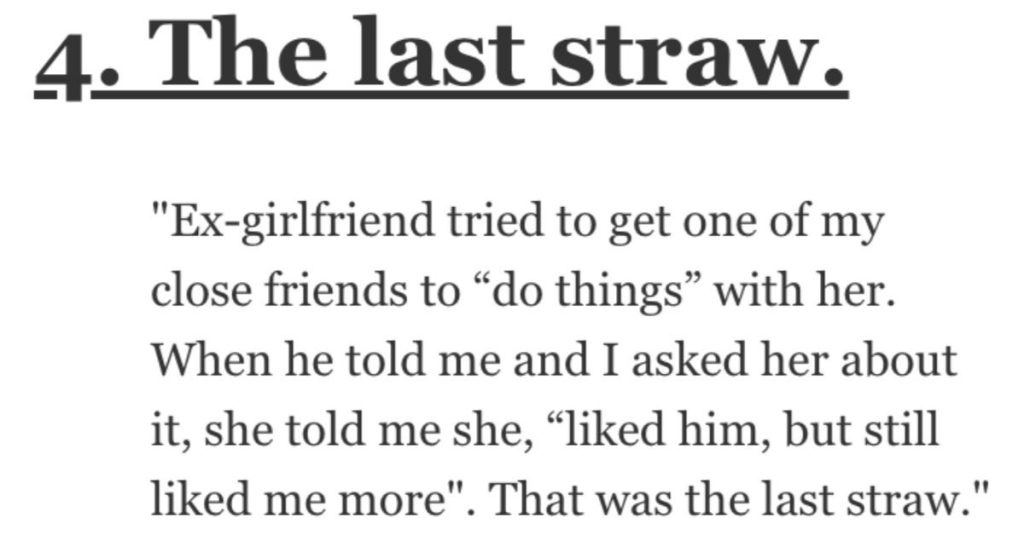 What’s the Worst Excuse for Cheating? Here’s What People Said.

It happens all the time and it’s very unfortunate…

I’m talking about people cheating in relationships, and you and I both know people who have been affected by it.

So what’s the worst excuse for cheating?

“I don’t deserve you so I gotta push you away.””

“I noticed that instead of saving money we were losing about $6k of our savings per month. We had a specific dollar goal to put a downpayment on a house.

When I looked into it I found out my ex wife was spending over 6k a month. She got upset and said that she should be allowed to do whatever she wanted to with our money. She had been buying random url names in the hopes one would be the name of an up and coming business that would have to buy it from her. Like a patent troll but with web sites.

I had been working my a** off picking up extra work travel to save money for us, and then took up even more work trips to make up for the losses and get us back on track to buy a home. After that, whenever I returned home she was cold and distant.

I tried to be affectionate to her and she told me to hook up with other women while on my work trips because she wasn’t in love with me anymore. She said she loved me like a cousin and hoped we could continue being married but in a non traditional way. Meaning, she could still spend all my money.

When I found out she had been cheating she said that she stopped loving me when I criticized her use of our savings and then started traveling more, which gave her time to reconnect with an ex. She had broken up with the ex about 10 years prior when he became a pill popping h**oin addict.

When they reconnected, he was clean so she left me for him. So the reasons were 1. I shouldn’t have been upset about her using our savings to buy website names instead of a down-payment on a house, 2. If I didn’t get upset at the loss of all that savings, I wouldn’t have picked up more work giving her the time and space to reconnect with her ex, and 3. She always loved him and he was clean now.”

“I walked in on my ex wife with two guys because she “really needed more Tramadol and they were going to give it to me for free if I helped them out”.”

“Ex-girlfriend tried to get one of my close friends to “do things” with her.

When he told me and I asked her about it, she told me she, “liked him, but still liked me more”.

That was the last straw.”

““I just have a flirty personality!”

“I’d had nothing but bad experiences, and had so many good ones with you, that I needed to know if I was fixed.”

“My group of friends had one friend who f**ked another friend’s wife.

His excuse? That’s just what I do.

I’ve heard that excuse twice in my life.”

“I was going to tell you eventually, but I wanted to make sure that we had a genuine connection.

I was given this line and shortly after went off the deep end for a while. Became a heavy al**holic.

She implied that in order to make sure her and her new bf had a ‘real’ connection she went over to his place several times.

With her even taking him back to her place, which is where I found them.”

““I performed a soul retrieval on him, and discovered that he was my soulmate, for thousands of past lives and thousands of lives into the future”

I was told this out of the blue, after a 21 year relationship, 18 years of marriage with two small children.”

“”He caught me cheating, serves him right for spying on me “.

Random girl I overheard talking on her phone.”

“I thought he was you.

I actually know a guy whos wife used this excuse.

He literally caught her blowing him, she said that she thought it was him and they are still together.”