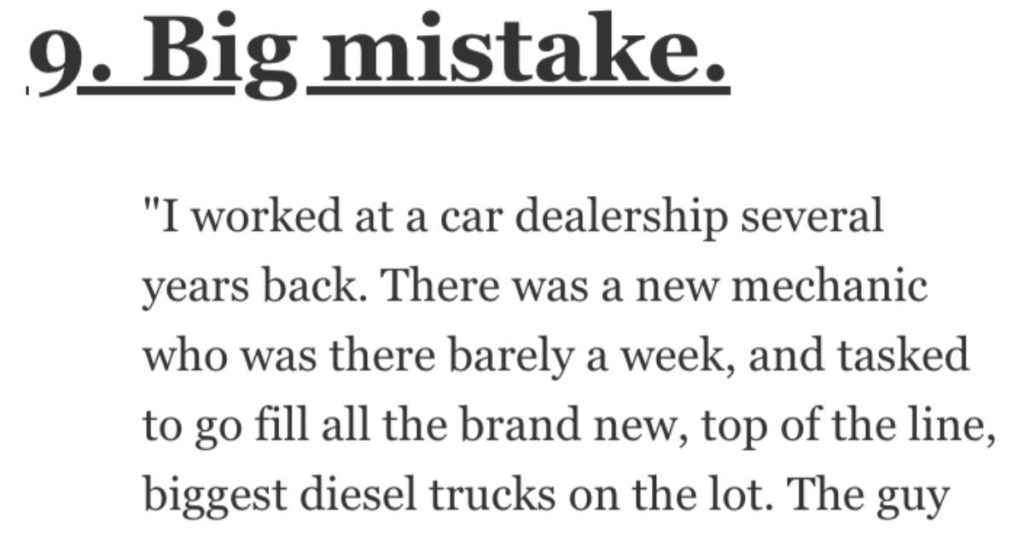 What’s the Worst Mistake You’ve Seen Someone Make at Their Job? People Responded.

My younger brother used to be the KING of screwing up at work when we were in high school.

He worked at a grocery store and it seemed like at least once a month he blew it in a major way and wreaked havoc in the warehouse with the forklift.

Anyway, let’s hear from AskReddit users about the worst mistakes they’ve seen people do at their jobs!

“I used to work as a maid in a motel and our usual supervisor was out sick.

The person who took her place that day mixed ammonia and bleach in a window cleaner bottle and poisoned me with ammonia chloride gas fumes when I sprayed the bathroom mirror.

If the maintenance man hadn’t come by and found me unconscious,it could have k**led me. For several months after I had respiratory problems,vision issues and a lingering burn in my nose and throat.”

“I had a girl that worked for me that one day had a guy try to pay with a $100 bill. We all knew that we did not take any bill over a $20 but she didn’t listen sometimes.

This time she took the bill and when she was cashing out her draw the smart safe didn’t take the $100 bill. I asked if she checked it and she of course said yes. I looked at the bill and noticed it said “Movie Prop” on the bill.

She somehow missed it.”

“On my last day of my high school Walmart job I was showing the new guy how to move pallets of milk into the cooler.

There were maybe 6 in total. I went to grab the last one and when I got back into the cooler the new guy had somehow bumped the pallets with the one he was bringing in and knocked all of them over.

Milk all over the floor, all that product gone. I immediately left and never looked back.”

Had a coworker once who scrapped a large stainless steel part on a lathe. Instead of telling the boss, they decide to bore out the center, replace it with a with a plug of the exact same size that they press fit in, then machine over it so it appears as one seamless piece. Passes through inspection, sent to the customer.

Customer vacuum bakes it, and the center plug falls through. Had that not happened, the part would’ve essentially, and quite literally, blown up the customer’s equipment once it got to a certain stage.

Government work, so there’s years and years and millions and millions of dollars invested into this customer’s project. Our shop would’ve had to close down permanently if the mistake wasn’t caught when it was. Coworker was fired immediately.”

The punishment for that is jail time and/or fines. They teach you in orientation on day one the severity of obstruction of mail. Wouldn’t understand why someone would do that.

If you’re having that bad of a day just call off or quit. The Post Office has its own division of police that’s job is solely to investigate manners like this and catch people.”

“A lady in our sales department sent a ra**st message bashing foreigners and how cheap they all are to another coworker using our company email…which tagged the entire company.

The CEO is also foreign.”

“Work in a brewery. One morning a brewer went to run a clean in place on a 60 barrel vessel.

After the vessels are empty they usually are under some significant pressure usually anywhere from 5-15 psi. Guy did not de-gas the fermenter before taking the sample port off. These vessels had two ports on them and we put a 1.5 inch cap on one port and a perlick sample faucet on the other.

He starts with the stainless steel cap. All of the pressure came out like a bullet. I could hear from the other side of a rather large facility. Dude got lucky and the cap barely missed his head.

He did get a bunch of yeast and hop residue in his eyes as his safety glasses were on top of his head and not covering his eyes. I drove him to the hospital and hes okay. Just got fired a couple weeks later.”

“I was working in a tool and die shop in my early 20’s and I was watching an old guy (who was perpetually dr**k) pound in an injector pin into a plastic injection mold with a big piece of steel round stock.

Well as he was pounding the pin in, he missed the pin and hit his thumb. It looked liked his thumb exploded. He was in such pain he pissed himself. They ended up amputating down to the first knuckle.

Then to make matters worse, he got fired for being d**nk on the job.”

“I worked at a car dealership several years back.

There was a new mechanic who was there barely a week, and tasked to go fill all the brand new, top of the line, biggest diesel trucks on the lot.

The guy filled all the trucks with regular gas. At the gas station down the street. Then drove them back to the lot.

He was fired pretty quickly after that.”

“I’m a home appliance installer and was out working a pretty big job at some 20,000 square foot mansion.

They had another installation team working on a second kitchen in the basement. One of these guys was drilling the mounting holes for the dishwasher into their granite countertop (don’t do this, ok?) and drilled them too small, so when we went to secure it a massive 4ft chunk of granite split off and smashed into the floor, breaking a couple tiles in the process.

Dude sounded like Yosemite Sam with his cussing and the customer was p**sed.”

“I worked in a cannabis lab and I watched someone drop a jar of cannabis oil worth 30,000 dollars on the floor.

She just walked out and didn’t come back after.”

“A guy i worked with got fired from his 120k a year job because he was stealing juice from the stock room.”

Tell us about some epic work fails in the comments.

We’d sure appreciate it!