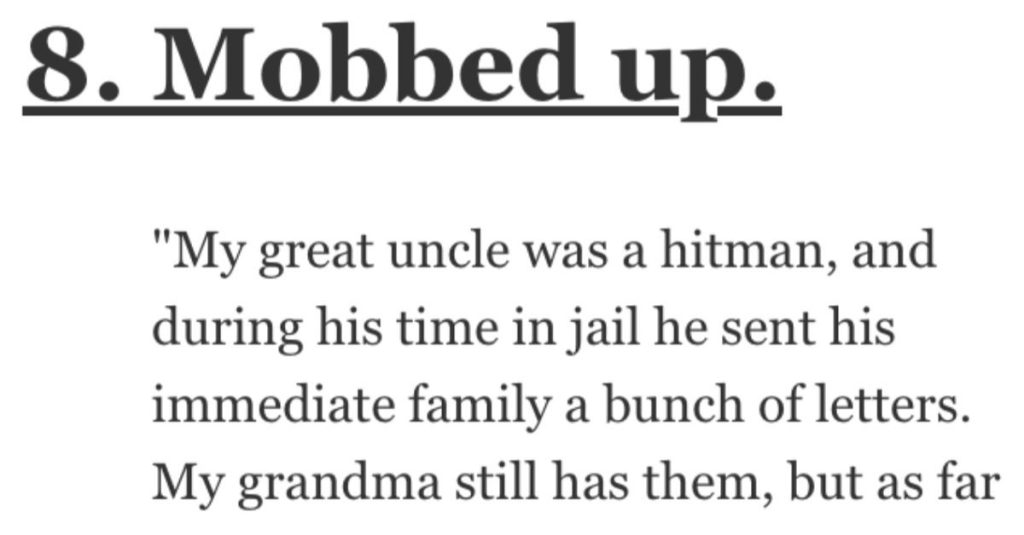 Does your family have a deep, dark secret that you all try to keep from other people?

One that is so embarrassing that you’d do anything to keep it in the dark?

If so, see if they match up with what these folks had to say on AskReddit.

Take a look at their stories.

“My uncle k**led my two year old cousin because he was mad at my grandad, he just grabbed him by his ankles and bashed his head on the ground.”

“My brother climbed into a bathtub with a revolver in a desperate state of hopelessness.

I miss him still today.

What I wouldn’t give to hug him harder one last time.”

“My father in law was 16 when he lied about his age to join the German army in WWII.

At that time, he believed all the propaganda that said Germany was winning the war. He went to the front only to spend several months retreating. He was eventually captured by the Americans. That time he lied about his age again, he said he was 15, so they let him out. He walked home at the end of the war, to a destroyed country.

He never again believed any propaganda from anyone, and spent a lot of his free time studying the history of Na**sm and the failure of their madman leader. He felt intense remorse about what he had been hoodwinked into participating in.”

“My great uncle, who was deputy sheriff, single-handedly ran the entire Klan out of my town. That’s not the secret though. It was common knowledge. So my great uncle had to wear a gun on his hip for the rest of his life.

The secret part is that my mother, who was a child at the time would watch the Klan members parade down the street, recognize their shoes and give names to my great uncle. I never told anybody that until long after she passed away.”

“My grandma had two sisters.

One got pregnant when she was in the military, the other sister had fertility problems and adopted the baby.

Nobody is allowed to tell him and he still has no idea who his birth mother is, despite the fact that both sisters have d**d.”

So, meanwhile while my dad was doing all of this my mother was doing essentially the same thing but reversed. My mom still doesn’t know about what my dad did and I don’t plan on telling her. Because I feel like it would be devastating for her.”

“Great uncle was a grand wizard in the KKK. He was disowned by following generations but his red robes are still kept around.

I’ve wanted to burn them but am always turned down. So, I don’t talk to the keepers of those robes anymore.”

“My great uncle was a hitman, and during his time in jail he sent his immediate family a bunch of letters.

My grandma still has them, but as far as I know she’s the only person alive who’s read them.

Someday we’ll find out what he wrote, but my grandma says she wants to burn them – I don’t know if she ever will.”

“When my grandma was d**ng (bone cancer), she’d already been lingering for weeks and at her last hospice visit, her hospice nurse said she could go on like this for two to three more weeks.

I asked the hospice nurse what I could do to help this happen as quickly and painlessly as possible. He didn’t say a word, just grabbed her liquid OxyContin bottle and put it in my hands. She went peacefully that night.”

“My paternal grandfather was an a**sive al**holic who no one liked. They found him d**d in his truck at 42 under mysterious circumstances.

He was buried and no one cared to investigate. Its still a secret what happened to him that I’m sure my grandmother took to her grave.”

“My oldest brother was given up for adoption because my maternal grandfather was r**ist.

Learned about him when I was 14 and could never say anything to the family. He grew up biracial in an unaccepting area and has had issues from both the black and white communities. He has since gotten lost in drugs and unfortunately my last contact with him was a paranoid rant before he cut off his number.

I haven’t seen/heard from him in 3 years even though I’ve flown to his last known locations to try and find him. I peruse the Doe project every once in a while for unidentified bodies. I miss him and hope he’s alive, he turned 40 this year.”

“I had my Dad do a DNA test so we could find information about where is family came from.

My Dad was never faithful to either of his wives. He was stationed in Korea for 1 year; I’ve been contacted by 12 different people from Korea who did DNA tests and match to him. I’ve had 6 people contact from the areas the I had grown up. I know 3 others personally. All-in-all, my father has 25 kids.