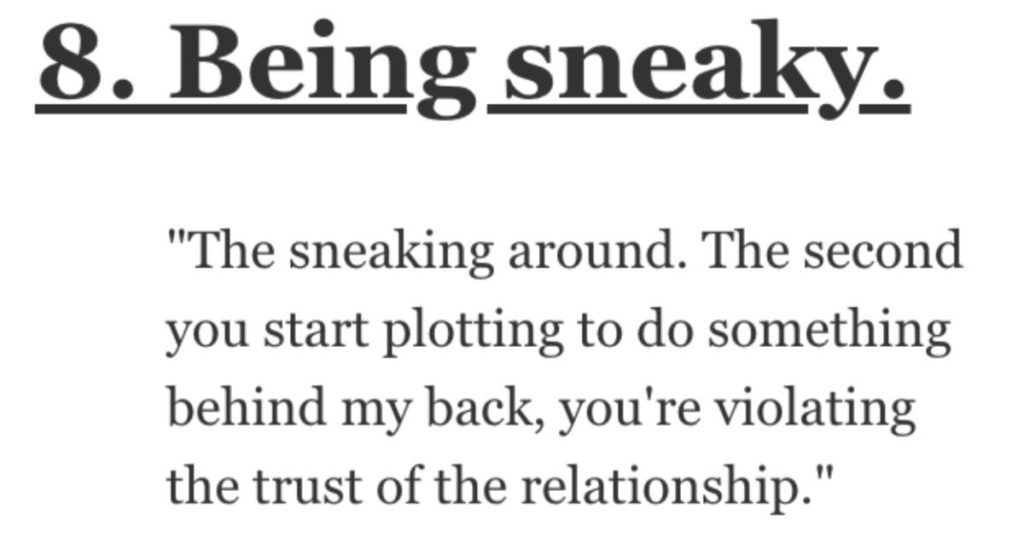 Where Does Cheating in a Relationship Start for You? Here’s What People Said.

I think we all know what cheating entails, but most people have different opinions on WHEN cheating in a relationship starts.

And today we’re going to hear from some folks on AskReddit who got real about what they feel about this.

1. What are your intentions?

“Honestly it’s about intentions more than anything.

If my SO started pursuing someone romantically that’s cheating – doesn’t matter if it’s lovey dovey texting or f**king. If my SO was at a party and a drunk person kissed him suddenly against his wishes, that’s not cheating.

At the end of the day it comes down to them wanting to be with another person and they aren’t being honest about it. The polite thing to do, even though it’s painful and hard and sad, is to break up. Breaking up is never s**ttier than cheating.”

The second you start plotting to do something behind my back, you’re violating the trust of the relationship.”

“If you would be unwilling to tell your partner about an interaction, then it’s probably time to start thinking about what you’re doing.”

“Yeah I think the two basic litmus tests are

Would you tell them/do it in front of them?

Would you be okay with it if they did the same thing?

If the answer is yes to both, it’s probably fine. If it’s no to either, then at minimum you’re on dangerous ground.”

“Lies. It always starts with lies.

Be it texts or snaps, if one of us have to lie or hide, it’s wrong and should not happen.”

“Dishonesty about something that would cause the other person pain.

Holding a surprise party and lying to pull it off is fine, s**ting with their best mate and just never having the subject come up is not.”

“A good guide is if you’re doing something you would hide from your partner or wouldn’t do it if they were in the room with you, then that’s cheating.

It can range from having s** with someone else, to simply flirting…”

“If you are saying, typing, doing something you would want to hide from your partner it’s already too far.”

“Even in an open relationship where it’s ok to have s** with other people, prioritizing someone else over your primary partner when you need them.”

For exampple, there isn’t anything inherently wrong with texting with another person if you are married or dating, but if you know in your heart that you are texting or engaging in conversation that makes you feel guilty or it would make your partner upset, you may be doing something wrong, even if you technically did not cheat.

If at any point you are justifying your actions or defending your actions/feelings/thoughts from a technical perspective, you may be at the start of doing something wrong.”

“If you wouldn’t want your partner to know, it’s cheating.

“When you’re hiding the nature of a “friendship” from your partner and the rest of the social circle because it’s becoming slightly more than a friendship and you aren’t shutting it down, you’re hiding an affair.”