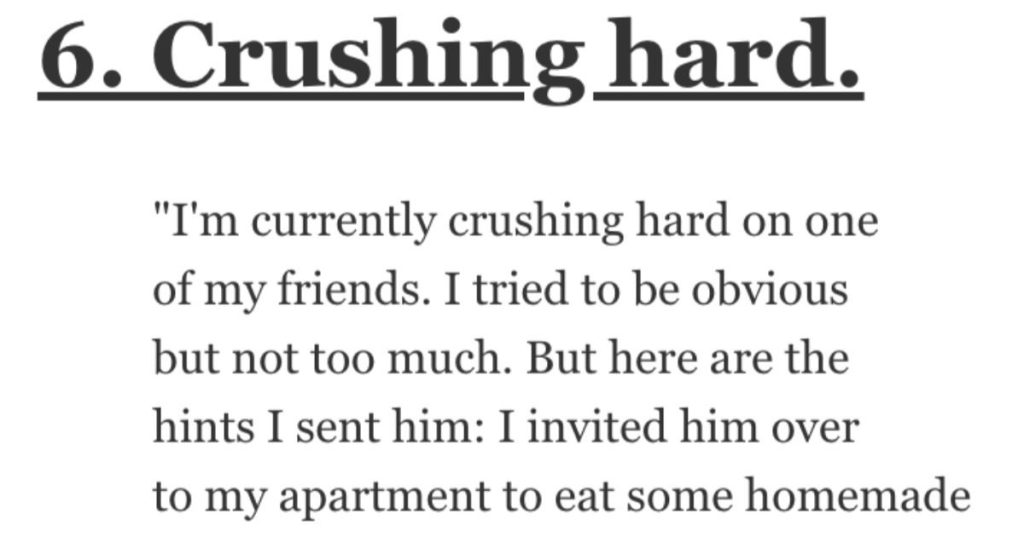 Women, What Hints Do Guys Never Pick Up On? Here’s What the Ladies Had to Say.

Can guys be any more clueless about women…?

By the way, I’m a guy, so just relax and don’t get all bent out of shape…

And, also, by the way, YOU KNOW I’M SPEAKING THE TRUTH!

Before you answer that, see what folks on AskReddit users had to say about this.

“I was on a date and we’d been waking through this forest walk by the river and it was quite romantic so we were kissing.

Eventually we stopped and got back to talking. I mentioned my really cute cat waiting at home and asked him if he’d like to meet Mo. He said yes so we arrive back at my house and for the next half hour he sits on the floor playing with my cat.

Eventually I had to tell him the cat was a ploy and I’d just really wanted to take him home.”

“I used to be pretty forward and have been turned down a lot.

Of course then he jumped in my DMs to ask if it’s too late. Yeah dude, we’re both married now.”

“When I was about 16/17 my friends parents went away. I had a massive crush on this guy and one night he invited me and another female friend round to watch a film with him and his friend.

I had my plan set up and it was going better then expected when my friend and his friend started kissing and went outside for some “air”. I said I was hot and asked the guy I had a crush on would he mind if I took my top off, he just said no go for it and then carried on watching the film.

I then asked if he could show me where the bathroom. We went upstairs and he pointed at it. I went for it and said “which bedroom is yours?” And he again pointed so I went in and sat on his bed. He still didn’t take the hint and just said “hurry up in the toilet so we can finish watching the film” ???

A good ten years later he messaged me on Facebook and said he’d just realised what I was hinting at ???.”

“Before I was with my current boyfriend, I went up to him and asked him out.

He thought it was a friendly thing because I’m “out of his league” it got to the point that one day, while we were hanging out, I literally said “ok we’re dating now.”

Because it took him 4 months and he was like “nice :)” We’ve been together for around a year and 3 months give or take.”

“Having short hair makes it hard. I hit on my football coach hard-core for about a year. Literally had to paint him a picture I was attracted to him

When he finally came over to “discuss the playbook while my parents are away” he told me he thought I was just a really friendly l**bian.”

“I’m currently crushing hard on one of my friends.

I tried to be obvious but not too much.

But here are the hints I sent him: I invited him over to my apartment to eat some homemade cake I baked especially for him in the morning before he came to my home.

I invited him again multiple times to play some Mario Kart Wii ( because I knew he would really enjoy ).

I tried to be next to him as much as I could.

During class, I used to get off my computer to see what he was doing ( then going to my other friends to not make it obvious ), sitting right next to him.

I knew he really like memes, I sent him some.

He loves games like Dark Souls and Elden Ring, so I started to play ( I really enjoyed it ), he would give me advices

He is a fan of the Master of the Universe. I bought him a book talking about it.

Maybe I’m being too reserved about my feelings, I don’t know.”

Either in a friendly way or a lover way, it still means I’m fond of you, dude.”

“I was pining after this guy for over a year and he never got one of my hints.

It got to the point where i just straight up walked up to him and said “Listen, do you like me or not? Because I have been giving you so many hints this past year that i’m attracted to you.”

But we’re getting married next year, so I’ve got that going for me.”

“Third date with guy on tinder and I was trying to Netflix and chill and he was a complete gentleman.

We were snuggling on a hotel bed watching Netflix and I was trying to push things further.

Eventually I just said “take off your pants now.” That got his attention.”

“My wife still makes fun of me for shaking her hand to say goodbye on our first date and then going 3 dates without trying to kiss her.”

Before the meet up my friend had told about him and I asked can I f**k him? She said sure. So at the coffee place friend finds a point in conversation to prompt me to tell a crazy s** related story I have, we all laugh, I also drop into the conversation that I’m bringing condoms to Vegas cause “who knows what might happen” and coworker responds good idea.

We go on the trip and friend goes to get our food order. I mention that it’s going to take her almost an hour, what should we do? While laying on the bed in “paint me like a French lady” pose. He says he saw they have blah blah movie on demand. About 5 minutes into the movie I not so nonchalantly wonder out loud if I will get a chance to use the condoms since we are leaving early tomorrow and have plans all night that night. He goes huh.

When we get back from the trip we drop him off first and the second we pull away my friend asks if he was “good” I told her I guess he wasn’t interested, bummer but I’m not in the business of sleeping with people who don’t want it so I wasn’t gonna push harder than I did. I explained the above to her and she agreed he knew and just wasn’t interested.

Friend calls the next day laughing her a** off. She had asked coworker why he didn’t go for it with me, and he asked what she meant, he genuinely didn’t pick up on any of it. He even said he thought I was being inconsiderate talking about my plans to find someone to sleep with while lying next to him in a bed…

He said he was planning to make a move but chickened out because he thought I would turn him down.”