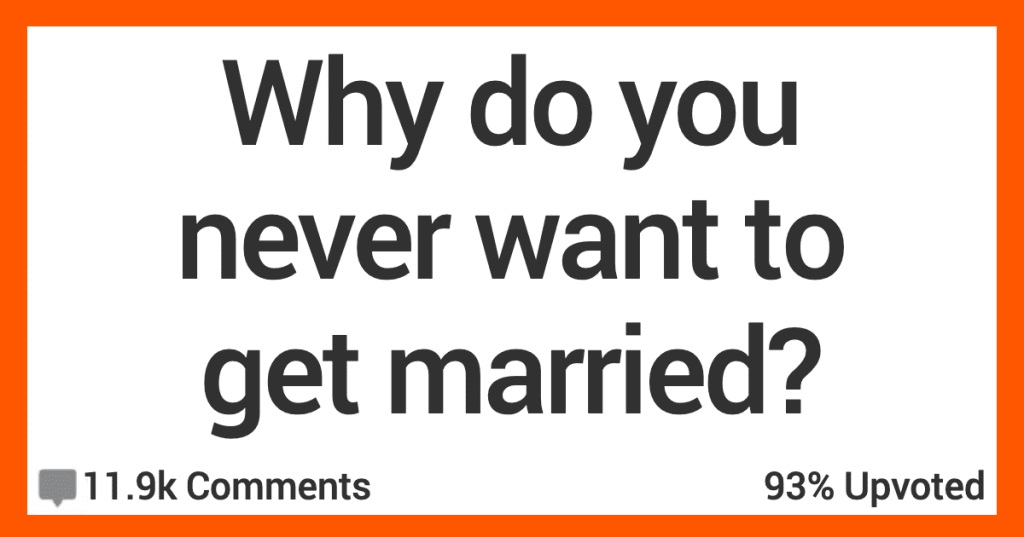 Why Do You Never Want to Get Married? Here’s What People Had to Say.

Marriage is DEFINITELY not for everyone.

Some people know that from when they’re young and others find it out after they’ve already tied the knot.

But you live and you learn, right?

Check out these responses from folks who opened up about why they never want to get married.

We’ve reached a time where most families can’t get by on just one paycheck, but cooking, housework, and caring for children are still seen as women’s work. Even husbands who do a lot of the domestic duties view it as ‘helping’ their wives rather than doing their equal share for the family.

I’m much happier raising my kids as a single mom without feeling resentful of a husband who actually created more work for me, called me a nag if I asked him to contribute, then complained that I wasn’t fun anymore. I know this isn’t the dynamic in all marriages, but I’ve seen it way too often, and I’m over it.”

“I was married for just shy of a decade. I’ll never do it again. So many dudes don’t want a partner; they want their mother, a maid, and a chef who they occasionally bone.

And there are so many cheaters. I’m not tying myself to someone ever again like that. If s**t goes south, I can just leave. And lastly, I really like my space.”

“You can commit to someone without paying the government to be allowed to do so. And that way, you don’t have to pay the government AGAIN to get out of it when it inevitably turns to s**t.

And let’s be real, marriage changes people, the mask falls off, and usually that ends badly.”

“My partner’s first marriage ended horribly with his wife cheating on him repeatedly with multiple people. After that, he swore off marriage and was really upfront about it when we started dating.

Now, 16 years later, I love not being married. I never had to go through the hassle and expense of a wedding, but we signed paperwork and wills in case anything ever happens to one of us.

And not being married helps keep us financially independent, which is great because I’m super frugal and would stress out about some of his spending if we shared finances.”

One serious health crisis could bankrupt a married couple, while staying unmarried only bankrupts one while allowing the other to provide stabilizing income.

“I never dreamed of it. I don’t think it’s necessary, and it’s archaic.

My parents’ marriage was not good, so I always saw it as a prison, and I value my freedom and independence too much.

I don’t see the point of involving the government in a relationship just to prove you love each other.”

“I went through fertility treatments on my own. I am a single mom by choice. I don’t really like the thought of someone else having a say how I raise my daughter.

I have a car, a house, and a good job. I like it being us and doing what the two of us want to do. I’m happy with our lives and how we live it. I don’t see how me being married would benefit either one of us.

My brothers have happily and willingly taken on the role of positive male role models for my daughter. Plus, I watch a lot of true crime shows. I am terrified of bringing a man into my home and something happening to my daughter.”

“I just have never cared about it.

As an atheist, I have no religious reason to get married. The whole tax incentive thing never seemed like a good enough reason to commit yourself to another person. I also really, really, REALLY h**e dating. It’s the worst.

Plus, I enjoy having the freedom to make major life decisions for myself without taking anybody else’s feelings or opinions into account.”

“Quite simply: I love my life already. I love my routine. I love my little house that wouldn’t be big enough for two people to live in.

I love not having to share my bed (seriously, I can’t stand sleeping in the same bed with someone else), but mostly, I love the freedom that comes with not having to incorporate a spouse’s opinion/needs/wants/etc. into decisions I make.

It is fully MY life. I have plenty of friends, family, hobbies, rescue pets, goals, dreams, etc. — marriage just isn’t something I’ve ever felt like I needed or wanted.”

“I have so much debt because of student loans.

I love my partner, but I would never want them to risk not being able to buy a home or take out their own loan(s) because of how much debt I have.”

“I think I would cheat.

I know that’s horrible to say, but just the thought of being committed to one person forever makes my skin crawl. I know I would feel trapped no matter how amazing my partner would be.

Best to dodge the bullet and save someone else from pain and betrayal.”

“I’ve had two long-term relationships that ended in me being cheated on. Both times, I had to work really hard to pick up the pieces of my life and put myself back together again.

Going through a divorce and separating two legally and financially entwined lives would be even harder. I’m also not prepared to risk myself again. I finally have a home I like, although it is rented

. I get disability benefits, which is just about enough for me to live on, and I have a nice, quiet, simple life. Someone would have to be almost perfect for me to even consider dating again, but I will never live with someone again, let alone marry them.”

Do you want to get married?

Why or why not?