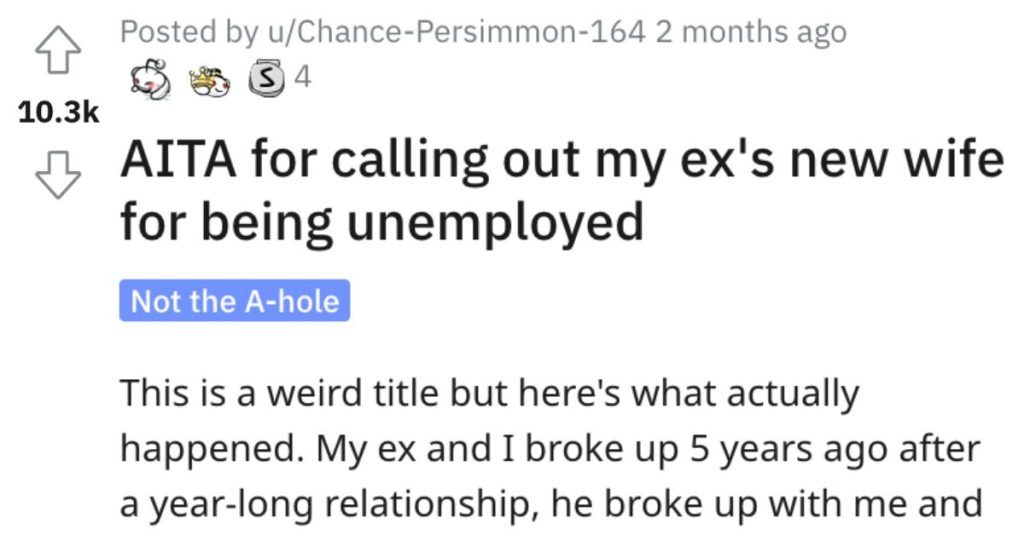 Is there anything wrong with being unemployed?

Well, obviously every situation is different, so I guess you need to get all the details before you make a call like that…

And that also goes for calling out someone for being unemployed.

AITA for calling out my ex’s new wife for being unemployed?

“This is a weird title but here’s what actually happened. My ex and I broke up 5 years ago after a year-long relationship, he broke up with me and I took it very hard back then.

I can’t say I did anything crazy, aside from a few weeks after the break up getting really drunk on a night out and sending him some embarrassing texts. It was the worst heartbreak I’ve ever had, and it didn’t help that he kept messaging me to be “friends” even though I tried to set boundaries and say I need space to heal.

Anyways, that’s all in the past. I can confidently say that I have indeed healed from that and am over him. He recently got married to a girl he started dating like 2 months after we broke up. Honestly, I’m happy for him. Good for them. Me, on the other hand, I’ve dated since then but haven’t been able to find anyone worth marrying; I haven’t even had another serious relationship since him.

He’s still in the periphery of my social circle, because we still have a lot of mutual friends from uni. And sometimes I see both of them in social settings. While he and I have buried the hatchet and usually just chat when we happen to be in the same room for a bit (although we never text or meet up outside of these contexts), his wife and I have always treated each other with polite disinterest.

I know she really doesn’t like me. An important note about her is that she’s been unemployed for a loooong time. Idk if its because she wants to be a stay-at-home-wife (completely valid choice if that’s her thing!) or because she’s been unable to find work, but she hasn’t worked in many years despite having a masters degree.

I’ve been really able to advance in my career in the past 5 years, and I’m quite far ahead in my field for someone my age and I’m very proud of myself because I worked extremely hard.

Anyways here’s the issue: the other day a bunch of people went for drinks. I came. They were both there. We were all sitting at the same table in a bar. Someone I haven’t seen in awhile asked me if I’m dating anyone.

I replied “no, not right now.” My ex’s wife quickly made a snark comment “aw it’s okay, some people just stay single” in front of everyone, like 10 of our friends. Without missing a beat, I blurted out “yeah just like some people are meant to stay unemployed”.

She got really upset, cried and left. Her husband messaged me that I should apologize to her for embarrassing her. I said I will if she apologizes first. He said she refused because what I said was worse, apparently.

This person said she’s NTA and that her ex’s new wife shouldn’t have started s**t. 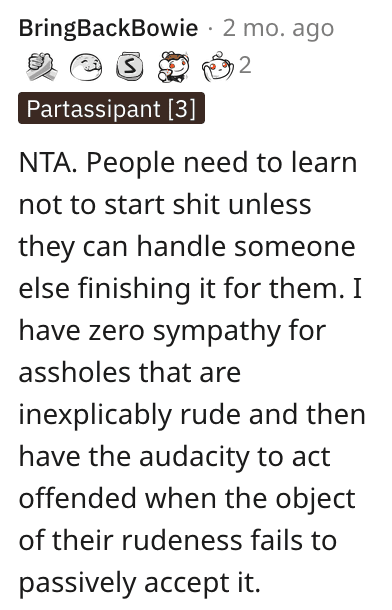 Another individual said she’s NTA and they were jealous of how quickly she came up with her response. 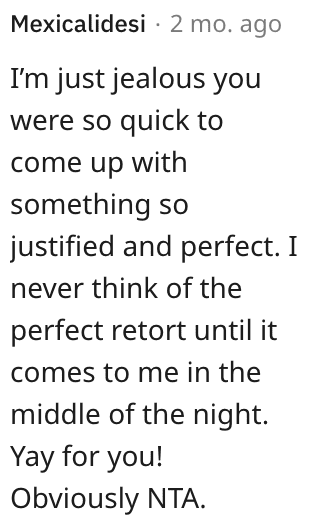 Another Reddit user said it sounds like the other woman likes to dish it out but can’t take it. 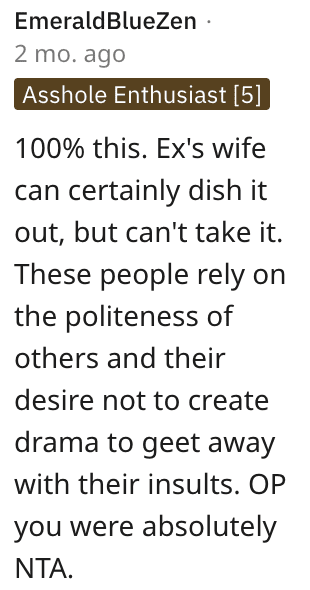