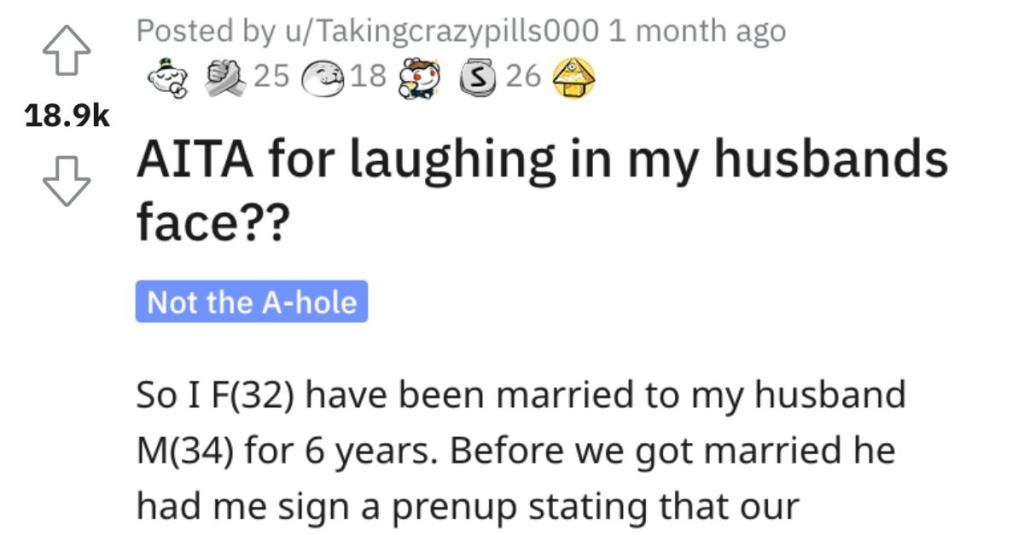 Have you ever had someone laugh directly in your face when you didn’t think the situation was very funny?

But sometimes I guess people deserve that kind of treatment.

AITA for laughing in my husbands face?

Before we got married he had me sign a prenup stating that our financials would always be separate and the only thing we would share was an expense account to pay for household related fees. The reason for this was because he was making pretty good money and I was in graduate school so my financial situation was pretty bad but I signed nonetheless because I understood he wanted to protect himself.

Anyway fast forward to now, I’ve been out of school for about 4 years and I make more than 3 times as much as he does. (I never asked how much he makes and he’s never asked me either).

Anyway 2 weeks ago I told him that I was thinking about buying a new car as one I had, was really old since I had had it since my undergraduate days. He wasn’t really interested and just told me to get whatever I liked.

So a week ago I decided to make the plunge and get an Audi, I was pretty excited as I had always wanted one….(at the time my husband was on a business trip, he got back yesterday) and I showed him my car…he was really happy for me, however later he asked me what my monthly payments were as the Audi was pretty new…at this point I told him that I had made the purchase in cash and that I had no monthly payments.

He was taken back and asked with what money and I answered that I made more than enough money to be able to afford it. He didn’t talk after that and I thought that was that………however after a few hours he came back to me and told that he thinks we should void the prenup……This is where I might be the a**hole I laughed in his face and asked him why I would agree to that and his answer was that we’re married and should share our financials.

So I told him that we’ve been married for 6 years and yet we’ve never shared financials and I was fine with what we were doing, and his sudden change of heart was very suspicious.

He called me a bunch of names and stormed out and didn’t come home and and I guess he told his family about our fight and they called to berate me and say how he supported me while I was in school (he didn’t) and now am wondering if I was the a**hole?”

This reader said this woman is NTA and that it sounds like her husband and she aren’t really partners. 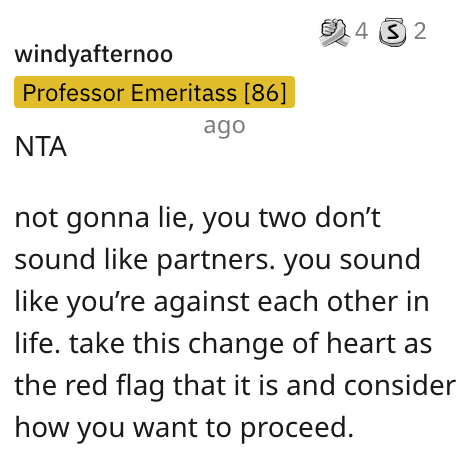 And another individual agreed that this woman is definitely NTA. 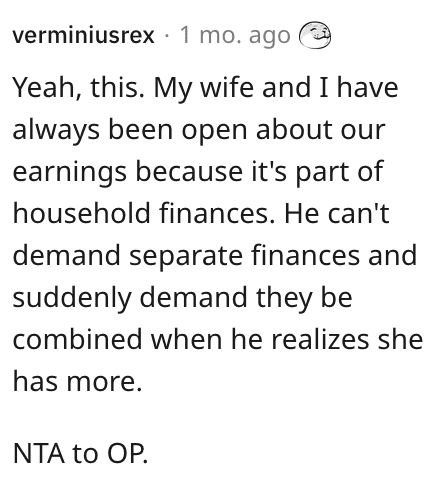 And this Reddit user made a good point about this situation. 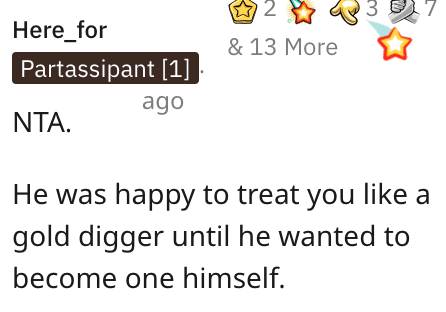