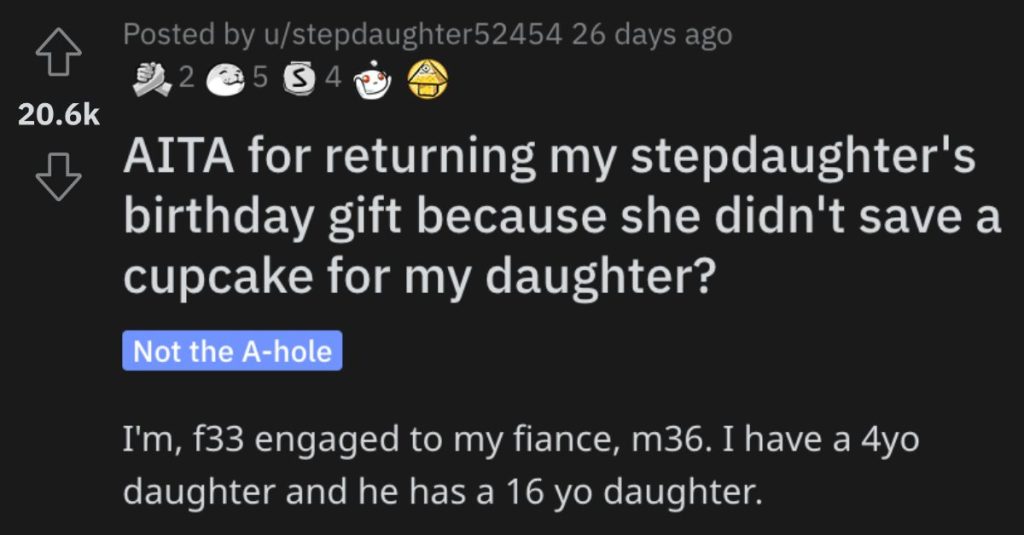 Does this story sound petty?

You better believe it does!

And we’re here for it!

Check out this story from Reddit’s “Am I the A**hole?” page and see if you think this woman acted like a jerk towards her stepdaughter.

AITA for returning my stepdaughter’s birthday gift because she didn’t save a cupcake for my daughter?

He comes from a conservative family so we won’t move in together til after marriage. So far we’re on good terms as a blended family. But I noticed that my stepdaughter acts kind of distant towards my daughter. Everytime I try to talk to my fiance about it he’d tell me to give the kids a chance to bond and warm up to each other.

My stepdaughter’s 16th birthday took place on sunday. Since she’s into baking. She decided to bake cupcakes instead of having an actual birthday cake.

My daughter and I went over to my fiance’s house to attend the party and I brought my stepdaughter a gift which was an iphone.

We sat down as she started serving everyone cupcakes. Then when it was my daughter’s turn, she bluntly said she was sorry but she didn’t save any for my daughter. I felt confused, I asked if she made enough cupcakes and wether there were guests that came uninvited. She said no and that she just didn’t make one for my daughter. I asked why, she refused to say.

Later, He came over and we had an argument. He said that I overreacted, and that I know how some teenagers can be moody and do random stuff without an explanation so I shouldn’t have taken it personally. I said she excluded my daughter and didn’t save her a cupcake but he said it was just a cupcake and then reminded me that he offered his cupcake and said I should’ve accepted it and called it a day.

He said taking the iphone which was supposed to be a gift back was poor taste and it might hurt my relationship with his daughter. I refused to give it to him so he could give it to her since she was crying about it. He left and was mad at me.”

We haven’t talked since then except via texts.

One reader said she’s NTA and she definitely shouldn’t marry this man. 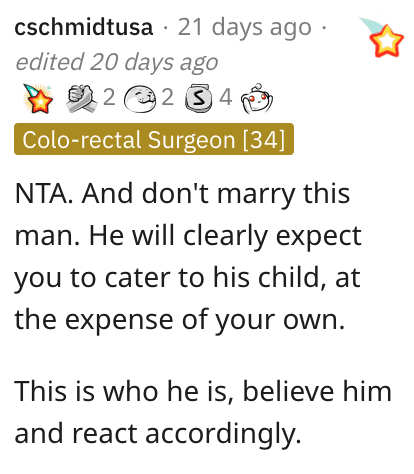 Another individual agreed and said this man’s daughter acts like this because she’s been allowed to. 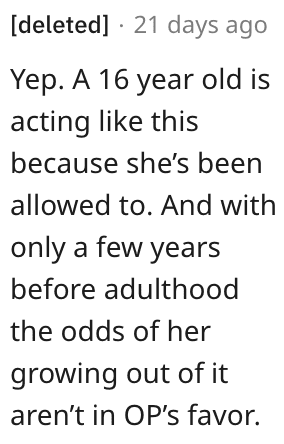 And this Reddit user said she’s NTA and that this behavior is crazy.