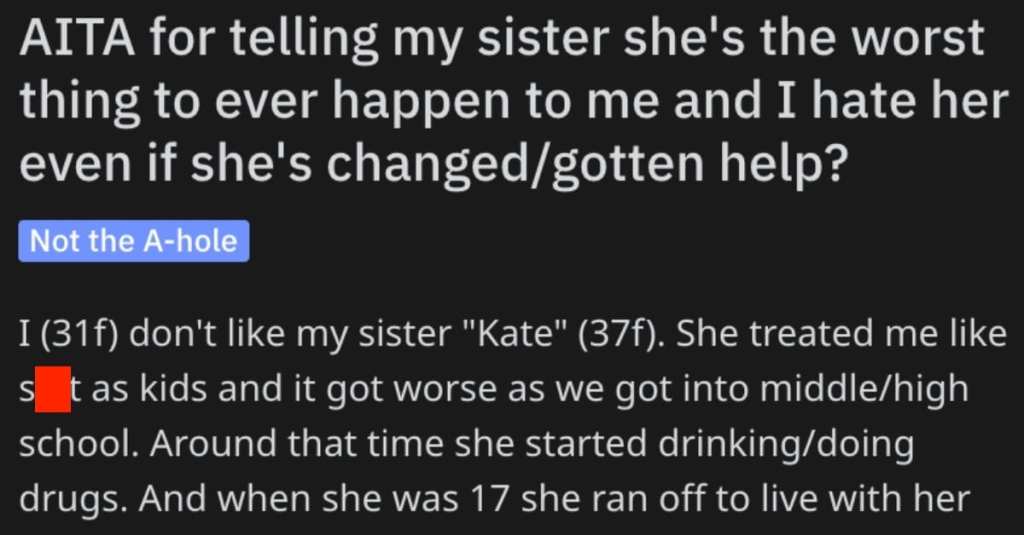 Sibling rivalry…it’s a story as old as time itself…

But there’s always a new tale to tell with a fresh spin!

And this one comes to us from a woman who had a spat with her sister and told her what she really thinks of her…but now she’s wondering if she went too far.

Let’s take a look at this story from Reddit’s “Am I the *sshole?” page.

AITA for telling my sister she’s the worst thing to ever happen to me and I hate her even if she’s changed/gotten help?

She treated me like sh*t as kids and it got worse as we got into middle/high school. Around that time she started drinking/doing drugs. And when she was 17 she ran off to live with her party friends. From then to 22 she only called to ask for money.

At 22 she fell off the earth and we didn’t hear from her until at 25 she came home sobbing, looking strung out. She begged for forgiveness and swore to get clean. We felt bad and took her in. For a year she was better. She got a job and was going to the methadone clinic.

One day mom and I were visiting a family friend 8 hours away and when we got home Kate and all her stuff + anything of value that wasn’t nailed down was gone. My laptop, our jewelry, tvs, dvd players, etc. An hour later grandpa called and said his water was shut off.

We went to check it out and found the cover by the street side water valve open and the meter inside shut off. Luckily we checked inside before turning it back on because all the copper pipes had been stolen. It was obvious Kate robbed us all and skipped town. We called the cops to report it but cest la vie.

A year later our grandpa died, leaving his things to Mom. He also left me some money. Sadly Mom was a wreck the next 4 years before she passed of a heart attack. She left everything but $150 (which she left to Kate) to me. I was destroyed after.

If it weren’t for my friends I don’t know what would have happened to me. During all this Kate only called twice. Once a week after mom died to see if she was left anything (I’ll admit I screamed at her) and once a year later to ask for money (I hung up on her).

She recently Dm’d me and apologized for how she’d acted before/after mom passed. Then she told me she hit rock bottom after our last call and OD’d and died for 3 minutes before being revived.

She said it motivated her to get clean stay clean in the years since. She wrote how she wanted to make things right between us and she didn’t want to lose her last family member.

I understand addiction is terrible and just because you’re an addict it doesn’t make you evil/bad. And they deserve second chances too. But that being said, I hate Kate. I can’t recall a single good memory with her. They’re all bad.

This is where I might be the AH. I wrote her back and told her so. I said I’d send her the money mom left her but I wanted her out of my life and as far as I was concerned I was an only child with no remaining blood family and that she was honestly the worst thing to every happen to me and I wouldn’t p*ss on her if she was on fire. I just said everything I’d bottled up for years.

My friend said I was too harsh and could regret not trying to make amends. I could be wrong, maybe my anger and grief are clouding my judgement. I know people change and maybe I should be giving her another chance.
]
So AITA?”

This person said that the woman is not wrong here and that she really doesn’t owe her sister anything. 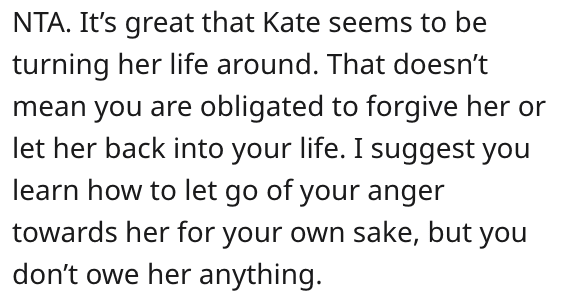 Another reader said that the woman’s sister has done things that will take years to heal…if they ever really heal at all. 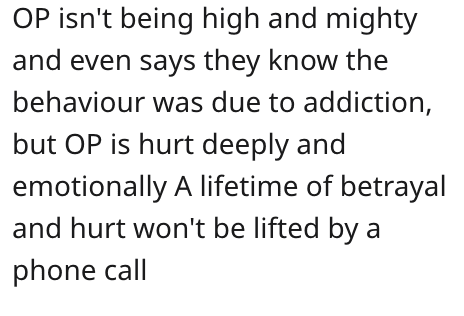 This individual said that the woman might never be able to trust her sister after what she’s done and the damage she caused her family. 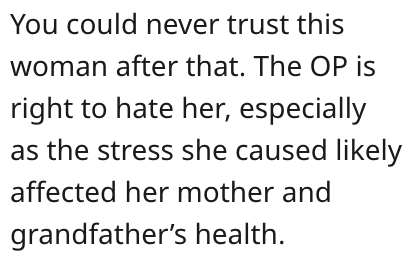 This Reddit user knows what this situation is like from dealing with her own mother, who she has cut out of her life. 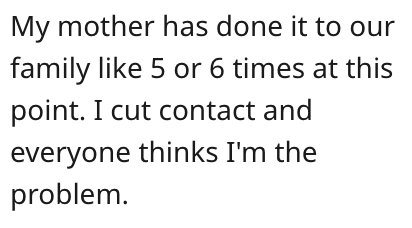 Lastly, this reader said that the woman owes her sister no courtesy whatsoever because of her actions. 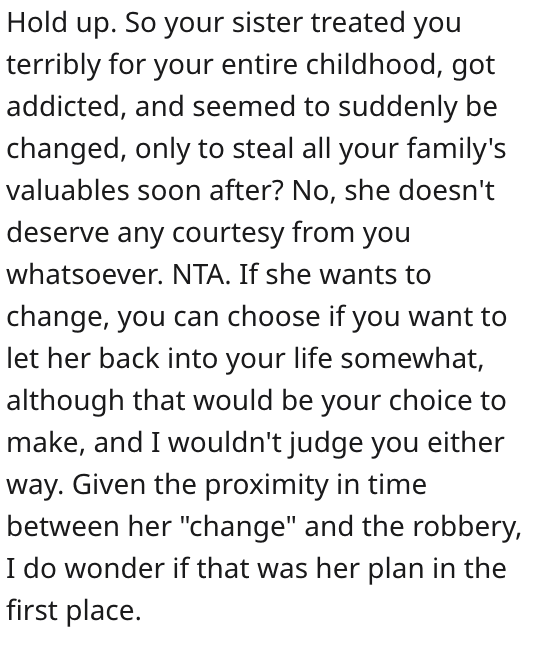 Was this woman way over the line?

Or did her sister deserve this kind of treatment?

Talk to us in the comments and share your thoughts!