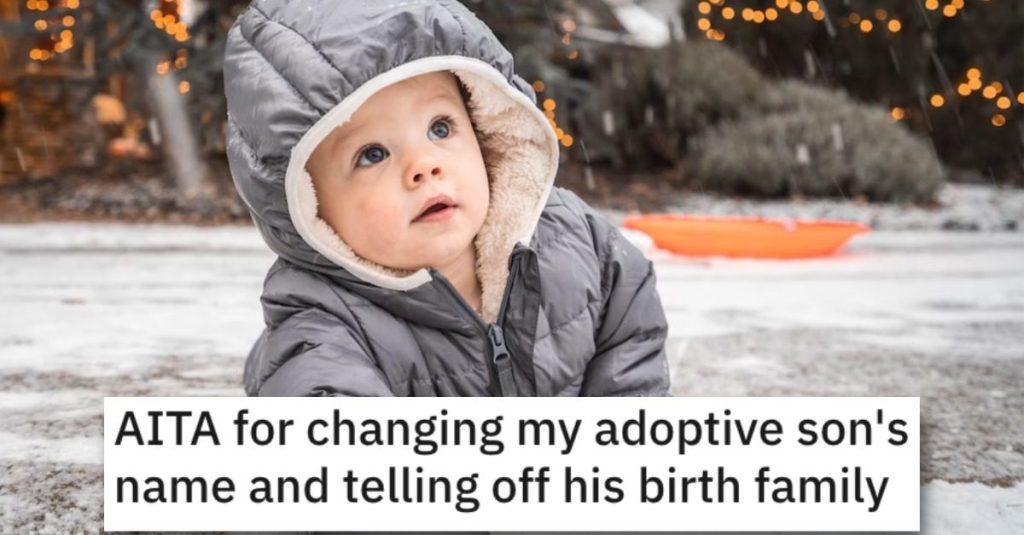 It’s an understatement to say that things can get complicated when it comes to adoption.

And this story highlights how things can get pretty touchy between adopted parents and birth parents.

Read on to get all the details and let us know if you think this woman was out of line.

AITA for changing my adoptive son’s name and telling off his birth family?

“My husband and I took in his cousin Sue’s newborn due to her and her partner John’s addiction issues. It’s not a decision I regret.

This beautiful boy is the light of my life but it was a major life change for us. Especially me as I was the one who gave up my job and my social life to be basically locked up isolated during covid with a baby. It was supposed to be temporary while they went to rehab. They never went to rehab nor complied with any of the safety plan set up by CPS.

From 2 months on they have not seen the baby nor supported him in any way. Johns family has not been involved either as they also refused to abide by the safetyplan or any of the CPS recommendations. Now 2 years later my husband and I have full legal custody and CPS has closed the file. We have put forth a petition to change the baby’s name.

At birth john and sue named the boy Steven to “honor” John’s brother who d**d of an overdose (while partying with John and Sue who was PREGNANT and getting high) My husband and I have never ever referred to the baby by that name. We always called him Davey (his middle name) after Sue and my husband’s grandfather.

So instead of being Steven David Jones we are changing it to David Owen Smith. Owen is after my father who absolutely adores him and accepted him as grandson from day one. So here’s where I might have ventured to asshole. My husband thinks I went too far but I feel they pushed me to the end. John’s family found out and blew up my social media and messaging.(not husbands just mine)

Telling me that I have no right to change the name or honour my father because I’m nothing more than a babysitter and I’m not the real mother. I was called a babythief amongst more vile accusations.

So I snapped and responded back that MY son’s names will honour good men that he could proudly emulate not like their junkie relative who was a s**tstain on the world defrauding the govt for benefits and stealing from anyone he could and contributed nothing to life or society and his only accomplishment is that he odeed before he went to prison. Harsh.yes. but I still don’t feel like I’m the a**hole.

I did not change the name on my own. My husband was very involved in the decision as were our 2 daughters who helped name their baby brother. The name reflects our cohesion as a family We are ALL Smith’s. And my girls came up with the idea of using Pippys name because it shows he wasn’t just adopted by my husband and I but by an entire family.”

One person said she’s NTA and that this is HER baby. 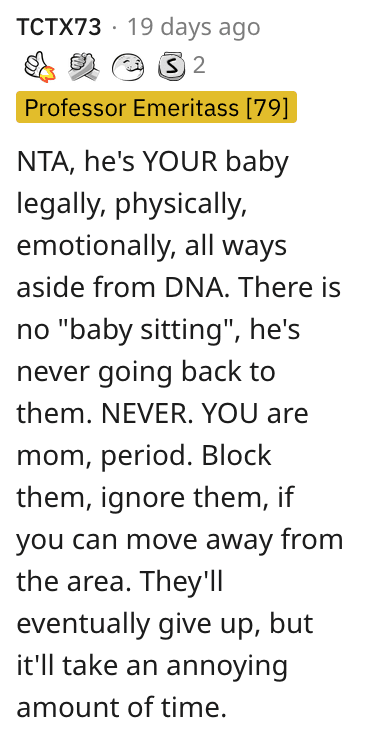 Another Reddit user also said she’s NTA and that she’s disgusted by these people. 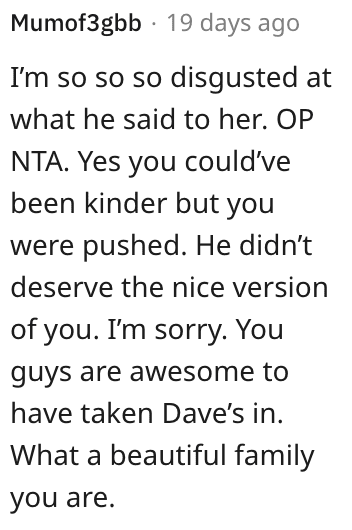 And this individual said she’s in no way, shape, or form being an a**hole.