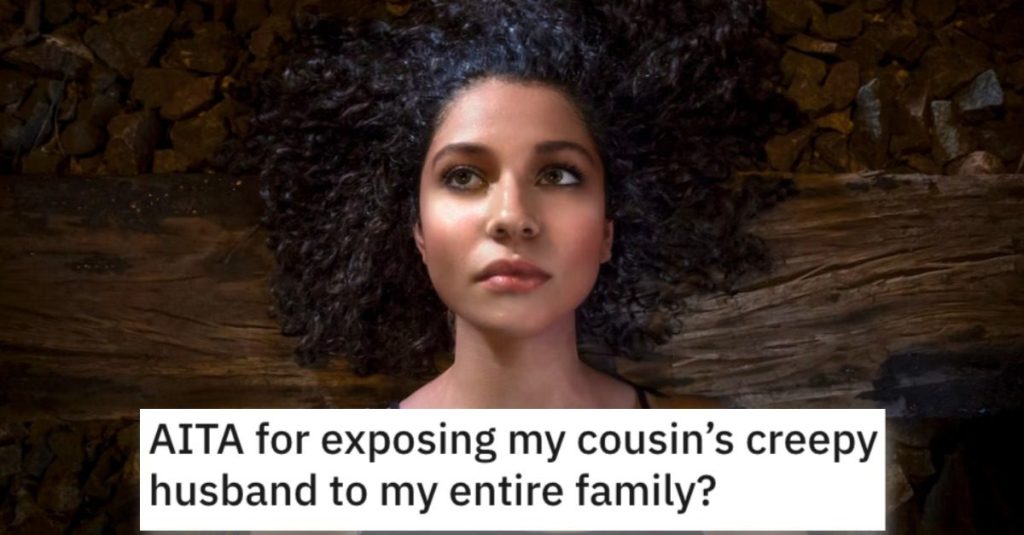 Yes, you’re about to read a story about a guy who I totally think is a creep…

But don’t take my word for it, read on below and see what YOU think about it.

Go ahead and get started now!

AITA for exposing my cousin’s creepy husband to my entire family?

“I (22f) met my cousin’s husband (24f and 26m) last July for their wedding. They live several states away so in addition to meeting him for the first time it was also the first time I had seen my cousin in a few years.

I instantly got a bad vibe from him and he made several comments that rubbed me the wrong way. He told me I seemed like a “wild child” and said he would bet I’m a “bad girl” at my college. Since meeting him he has followed me on Instagram and sporadically sends me reels (which I don’t open) and comments odd things on my posts like “looking good cousin ?”.

He even DM’d me once “hey I’ll be in your state this weekend on business…lol” which I never opened either. All of this definitely creeped me out but I didn’t feel like I could say anything about it because my cousin and I aren’t close and I’ve always felt like she looks down on me because she is a devout Christian and I am not.

Fast forward to this week, one of those fake accounts on Instagram popped up with some of my pictures asking for money for X-rated pictures. The bio was in broken English, the pictures were poorly cropped screenshots of my two most recent posts, and the cash app was random string of numbers and letters.

The account just looked very fake and many of my friends sent it to me and and reported the account. Of course, the 1 person who apparently fell for it was my cousin’s husband. I then got a very long, nasty DM from my cousin telling me she had been very tolerant of my sinful lifestyle (whatever that means) but this time I had gone too far.

She said she didn’t care that we were family and so long as I was posing a threat to her marriage I was no longer welcome in their lives. I calmly and politely responded that this account was not me and that I had already reported the account to Instagram to be taken down and I apologized for the apparent disruption to her day. She responded that she didn’t believe me and said she pities me for having such low self esteem and would keep me in her prayers.

I lost it at this point. I called her stupid for falling for an account that was so obviously fake and said that her husband was such a blatant creep it was embarrassing she even married him. I sent screenshots of the months of DM’s from him that I never responded to and concluded by saying “if your marriage is so easily threatened, get a divorce. Don’t take your insecurities out on me.”

Shortly after I got angry phone calls from my mom and my grandma saying my cousin made an honest mistake and that my response was cruel and unjustified. Apparently my cousin showed everyone our messages and is humiliated by what I said.

My mom is worried our relationship with that side of the family is permanently damaged, and now I may not be welcome at future family gatherings because my grandmama “doesn’t want the drama.” I really don’t feel like my response was out of line, but since no one else agrees with me I’m not sure.

And here’s what folks on Reddit had to say.

This person said she’s NTA and that she should say good riddance to this guy. 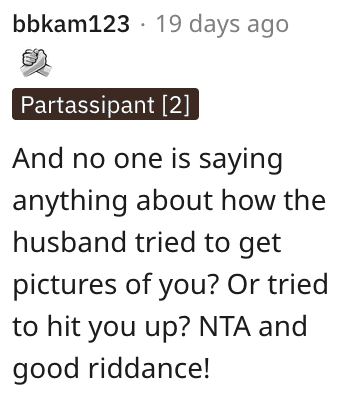 Another individual agreed and that her mom’s priorities are in the wrong place. 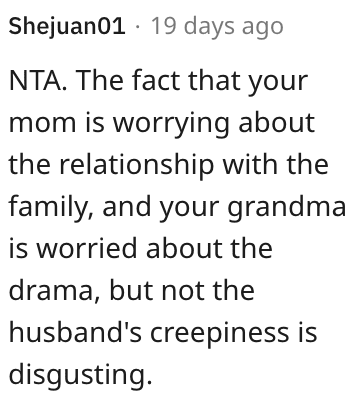