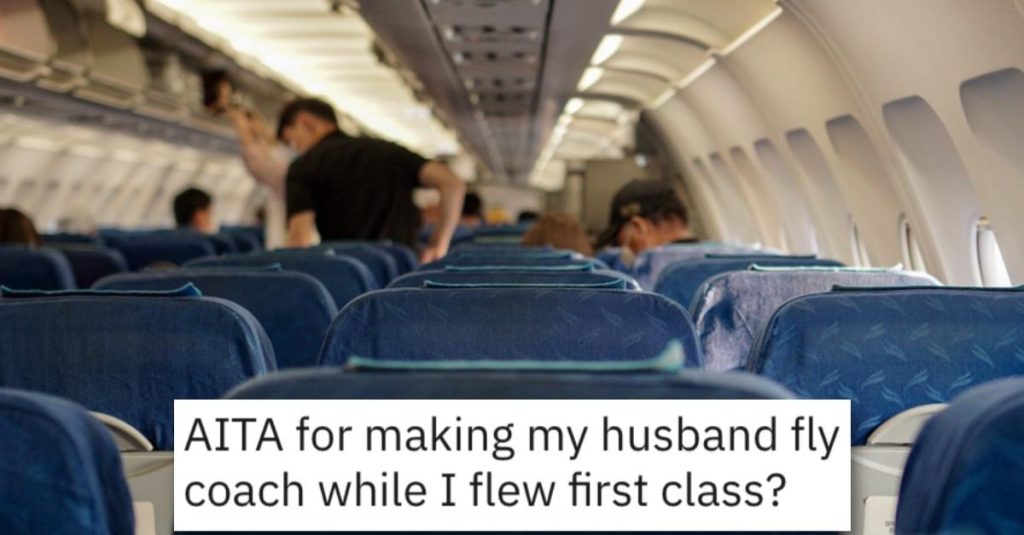 I’m gonna fly first class with the aristocrats while you sit in the back with the peasants, okay?

Uh oh…I have a feeling that this is gonna be ugly.

But did the woman who wrote this story act like an a**hole?

Read on to see what went down…

AITA for making my husband fly coach while I flew first class?

“My husband’s (33m) company recently chose him to attend a conference in Miami.

They chose just him and a few of his co-workers out of a ton of candidates so it was quite the honor. The company told them that they were allowed to bring their spouses/partners but that they wouldn’t be springing for plane tickets for us, so if they wanted to bring us they’d have to buy tickets out of their own pockets.

My husband asked me (32f) if I wanted to go and I emphatically told him that I did; I’d never been to Florida in my life and I thought it’d be a fun trip.

He told me “great” but when we went to the website to buy tickets he asked if I’d be OK with flying coach even though he’d be flying first class on the way there–coach on the way home. I asked him why we couldn’t just fly together and he replied “First class is just so expensive. I feel bad but we just can’t afford it, especially if we want to go out and have fun in Miami. The flight is only a few hours.”

This really, really bothered me. I understood that a first class ticket for me would strain our budget a bit but what kind of a man lives it up in first class while his wife sits in coach? I asked him just that and he responded “Come on. I’m taking you along on my work trip. I earned my first class seat by working hard. It’s my reward.”

But I insisted that if we truly couldn’t afford a first class seat for me (we could have; it would have hurt a little but we could have) that he as a gentleman should give up his seat for me. We argued but he ultimately agreed to give me his seat.

We had a good time in Miami but he’s been a little mad at me since, saying that he earned his first class seat; that it was free and cost us nothing unlike my plane ticket, and that I should have just let him enjoy what he’d earned instead of “guilting him out of it.” I think he’s being a baby and that he should have put his wife’s comfort above his own, especially since he made the choice to be cheap.

We’re very close to his parents so we’ve taken this argument to them for mediation but they are split; his father agrees with me that he wasn’t being a gentleman while his mother thinks that he earned his first class seat and that I should have let him have it.

One person said she’s an a**hole and that she should have just covered the cost difference of a first-class ticket herself. 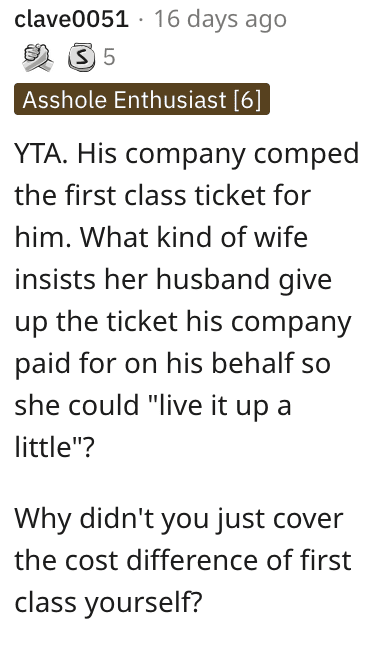 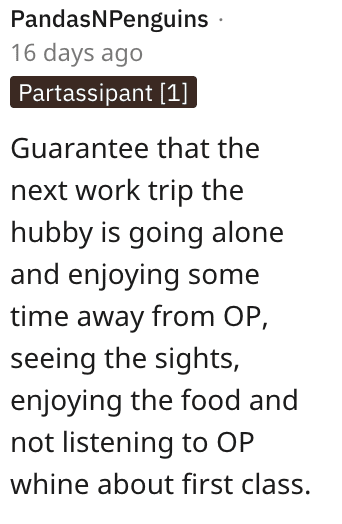 And this reader said she’s totally selfish and an a**hole. 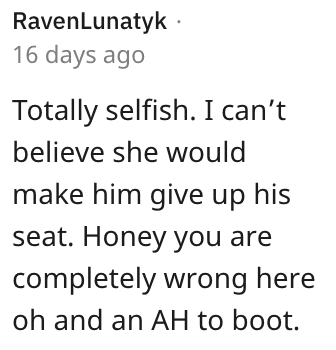