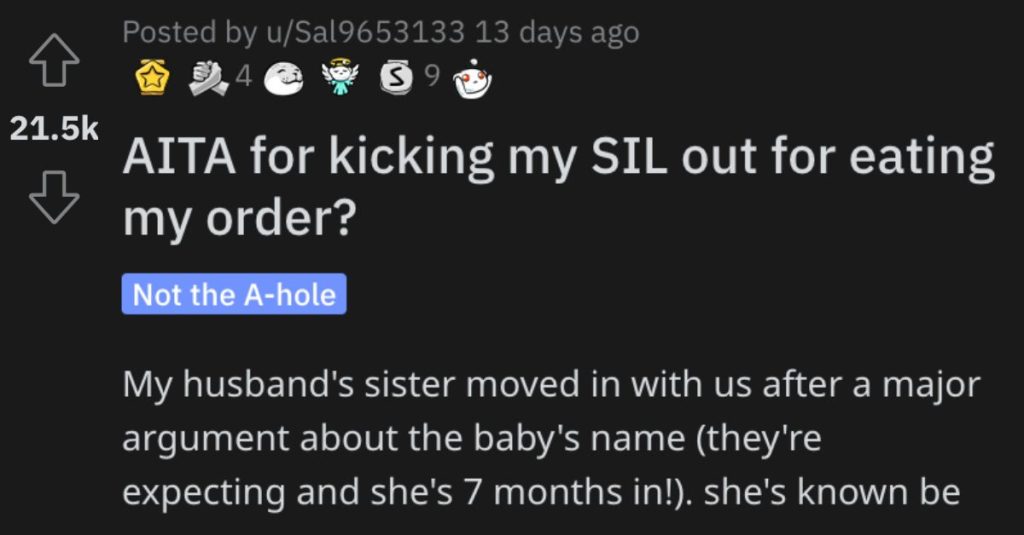 Eat my food, you’re headed out the door.

No so fast, friends…

Let’s see if this woman acted like a jerk for kicking her sister-in-law out for eating her food.

AITA for kicking my SIL out for eating my order?

“My husband’s sister moved in with us after a major argument about the baby’s name (they’re expecting and she’s 7 months in!). she’s known be picky and refuses to eat what what we normally cook.

We only cook her favorite food, which I can’t eat (allergies yay!!) Everyday at dinner I have to figure out what to eat since she only eats food that I’m allergic to.

Last night, My husband agreed that he’d cook for her and cook for us together separately. I got home after a long day at work and found out that SIL convinced my husband to only cook the meal she wanted and cancel on the meal we planned to have. I saw them eating together in the kitchen.

My husband apologetically said his sister convinced him to eat with her and not cook the meal I wanted us both to have. I said it was FINE then went to order some food from the restaurant.

I went to take a shower and did some work on my laptop then came downstairs to find my order placed on the kitchen counter. It was open and someone ate the majority of it. I turned around and there was SIL standing saying she woke up hungry and couldn’t “resist” the smell that was coming out of the box.

I lost it and yelled at her asking wtf she did that but she said that she did save me some which isn’t true because there was only some rice and dressings. We started arguing and I told her I couldn’t take this anymore and told her to pack her s**t and leave first thing in the morning.

She began crying and my husband got involved and defended her up and down repeatedly saying she’s pregnant and is eating for 2 basically. He suggested I go make myself something quick from the fridge and let it go but I refused and a bigger argument ensued.

AITA for kicking her out over this?”

One person said she’s NTA and that she has a HUSBAND problem, not a SIL problem. 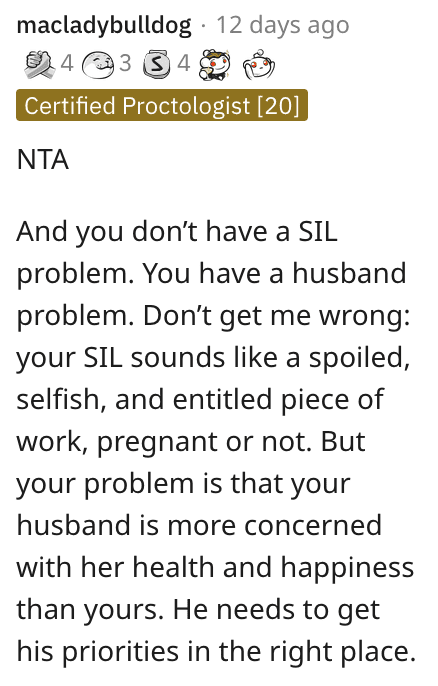 Another reader said the SIL is an a**hole but the husband is an even bigger one.

And this individual said they don’t understand how people keep finding spouses like this.