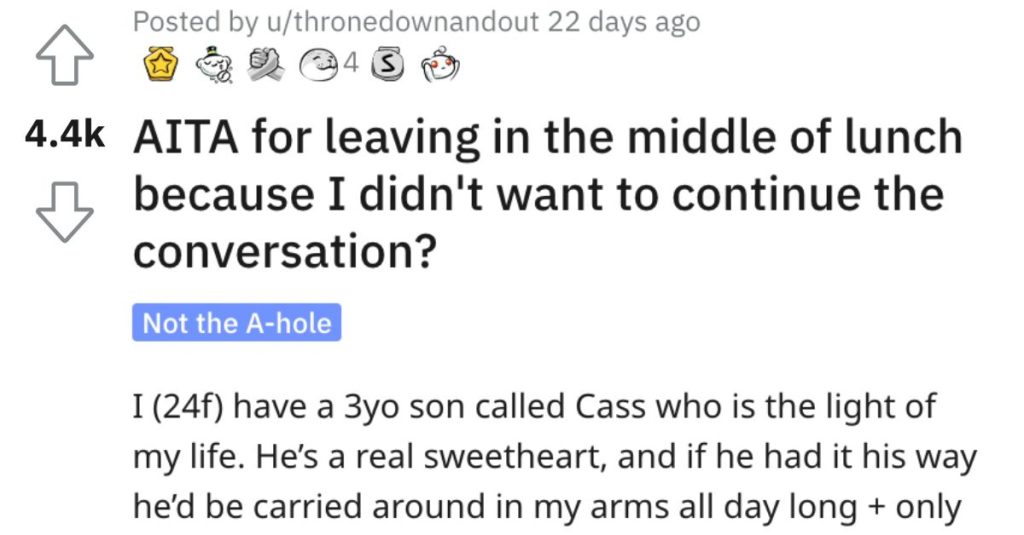 Or I guess you could say, when you FEEL like going, just get up and leave.

But does doing that make you an a**hole if you happen to bail in the middle of a conversation?

Let’s see what happened in this story and you let us know what you think in the comments.

AITA for leaving in the middle of lunch because I didn’t want to continue the conversation?

“I (24f) have a 3 yo son called Cass who is the light of my life. He’s a real sweetheart, and if he had it his way he’d be carried around in my arms all day long + only put down when we come across a cool bug.

He doesn’t talk very often, it’s something that I was worried about in the beginning because as a young mom I worried about almost everything, but the pediatrician told me that he’ll likely become more talkative over time. I’m currently looking into speech therapists just to see if that will help a bit, and we’re currently learning sign language too so Cass can switch to that when he doesn’t feel like using his voice.

He’s such a smart kid, and he’s so curious about everything. All he ever wants to do is explore and learn about new things. I’m so proud of him and I love being his mom and getting to see the world through his eyes.

My mom (50f) doesn’t like the approach I’ve taken to my son’s tendency to not speak very often. There have been a few times where he’ll clearly be asking for something, and she’ll refuse because he isn’t using his voice. It’s one of the main reasons why I never ask her to babysit, bc it bothers me when she does that and I stop it every time.

We were all at a restaurant with my step dad (55m), my step brother (30m), his wife (30f), and their son James (4m). When it came time to order, I read some options out to Cass and he signed yes for the meal he wanted. James spoke to the waiter on his own.

When the waiter walked away my mom got upset with me, she said that because I’m the parent, I need to tell Cass to get over his stubborn attitude about speaking and that his refusal to do so is ridiculous. My stepdad then expressed concerns about the fact that James was saying full sentences by 2yrs old but Cass is 3 and he’d only ever heard him say about five words.

I told them both that I didn’t appreciate them trying to have that conversation with me in front of Cass and at a family lunch but then my mom said that if Cass had an issue, he should use his voice to tell them that instead of relying on me to do it for him. I ended up flagging the waiter down and asking for my part of the bill and if I could get the food to-go because I didn’t think it was fair for my son to have to sit there and listen to them talk about him like he couldn’t understand what they were saying.

Once I paid and got the food, we went home. My mom texted me later saying that I’m doing my son a disservice by not making him speak, that it was rude of me to leave lunch like that just because I didn’t like the way the conversation was going and that it speaks to my immaturity.

Truthfully if I had pushed him to do it, I know he would have verbalized what he wanted, but he clearly felt more comfortable signing so I didn’t feel the need to do that.

Regardless, was it an immature/AH move to leave like that?”

This reader said she’s NTA but her mother is sure acting like one. 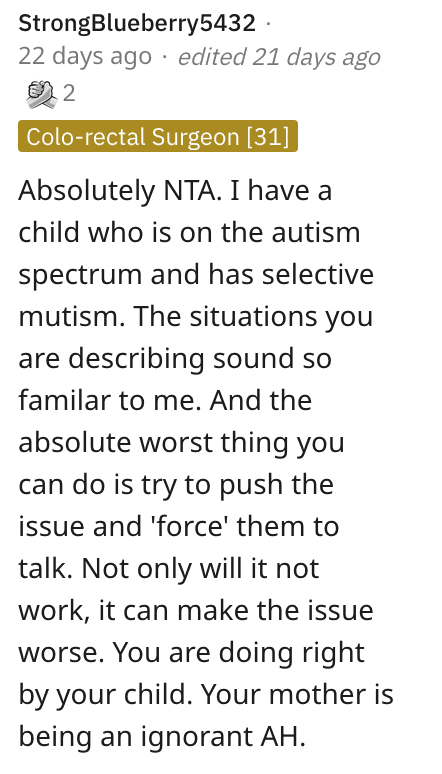 And this individual said she might want to consider getting her child assessed for autism.

And this Reddit user said she needs to avoid her parents while she figures this out because they’re just making everything worse.