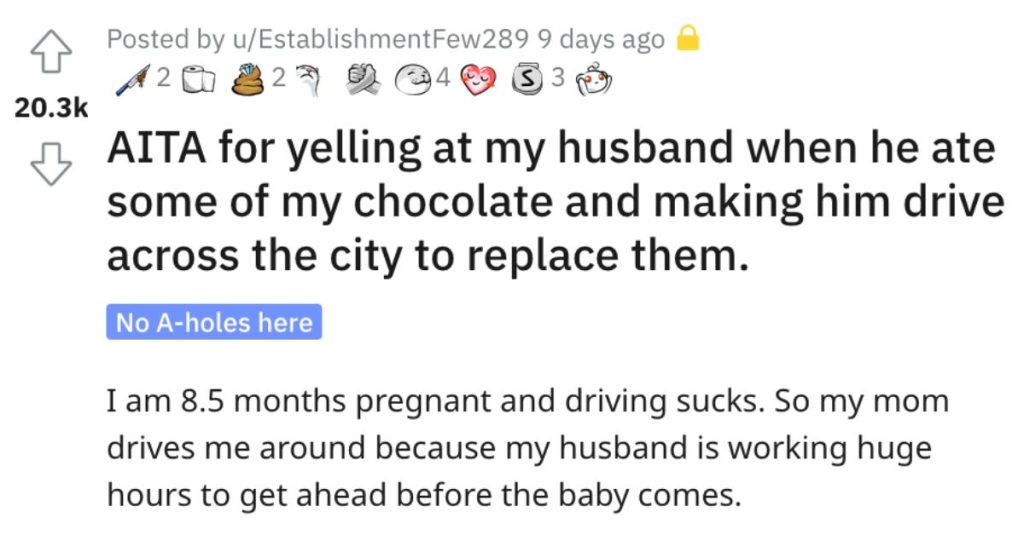 I’m gonna give you some free advice today, ladies and gents.

And especially don’t mess with a pregnant woman’s CHOCOLATE.

Okay, now read this story and see if you think this woman’s behavior is out of line.

AITA for yelling at my husband when he ate some of my chocolate and making him drive across the city to replace them?

“I am 8.5 months pregnant and driving sucks. So my mom drives me around because my husband is working huge hours to get ahead before the baby comes.

Last month she drove me to my favorite chocolate store and I stocked up on my favorite flavors. The store has dozens of flavors of chocolate individually wrapped in colorful foil so you can tell the flavor. The store is about an hour’s drive away from our home.

My husband knows my favorite flavor. Half the bag was originally that flavor but by now it’s just even with the others.

He came home from work yesterday and after supper we were going to sit and watch tv. I waddled over to the couch and asked him to please bring me two of my chocolates. He did and he grabbed a few for himself. No problem there.

He came back to the couch with chocolate in his mouth. When he kissed me I knew what flavor he took. He admitted he took the stracciatella ones. My favorite.

I got kind of upset and he said it was no big deal, I could go with my mom and get some more.

Yes this company sells their chocolate everywhere but that flavor I’ve only ever seen this flavor in their store.

I asked if he has been eating that flavor a lot and his face told me everything I needed to know. I yelled at him that it’s not like it’s easy for me to sit in a car for two hours. He said he would go out right now and replace them.

He hit a couple of drug stores, and a couple of grocery stores they all told him the same thing. So he drove across town and came back with a big bag of just that flavor.

While he was gone I called my mom and she said I need to calm down because my hormones are making me crazy.

I apologized to my husband but he is still grumpy that he drove around for hours just to get me chocolate.

I think he should know better than to eat my favorite flavor.

I know this isn’t as big a problem as some of the other stuff here.”

One woman shared her own similar story and said they will be laughing about this sometime down the road. 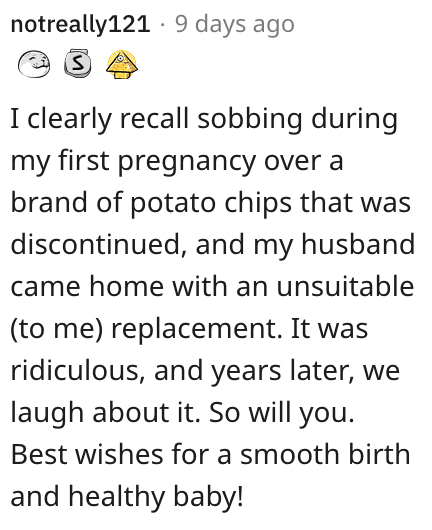 Another Reddit user said she’s NTA and that “chocolate gate” will be a funny story for everyone someday. 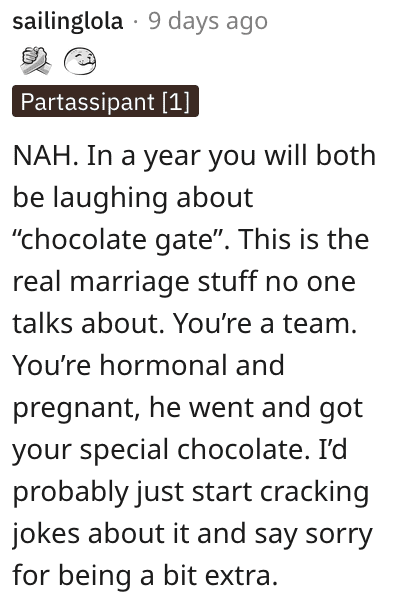 And this individual said she’s NTA and that it sounds like she has a good husband. 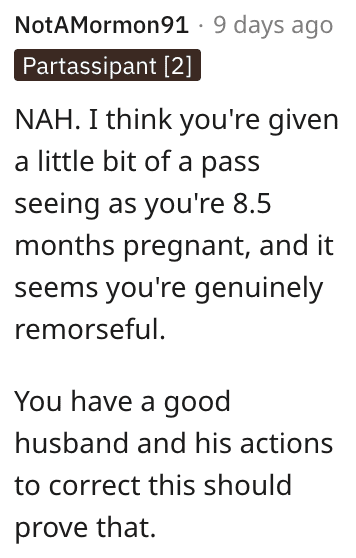