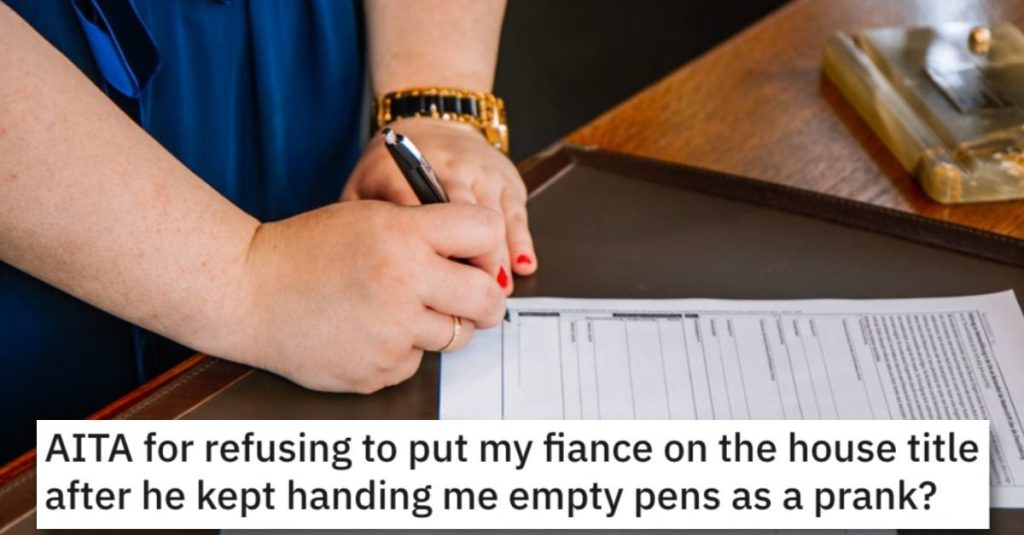 Why on earth would you choose to annoy your significant other when you were doing something really important like signing important documents?

People never cease to amaze me!

And this woman got so fed up that she refused to put her fiancée’s name on her house title.

AITA for refusing to put my fiancee on the house title after he kept handing me empty pens as a prank?

“I F, 34 have been with my fiance M, 37 for 3 years. Getting married before the end of this year and recently moved in the house that I inherited from my mom.

The house is in my name and it took a lot of talking and convincing from him to have his name on the title as well. Now honestly part of me doesn’t think this is a good idea, at least not right now maybe after marriage? But anyway, I’ve decided to go ahead and put his name on the title so he could go ahead and start contributing towards mortgage more and light my burden a little bit.

We’ve made appointments, decided on which form of ownership we were basing this on. when it was time for me to sign the deed, My fiance stopped me and gave me a pen saying this pen was his “lucky” pen and told me to use it to sign the deed. I took it and tried to sign but turned out it was empty.

He was like “oh I must’ve forgotten” while laughing and then pulled out his “other lucky pen”. I took it, tried to sign and that one too was empty. Honestly, seeing how he was laughing I figured he was messing with me but he swore he wasn’t and pulled out ANOTHER one of his lucky pens. I tried that one too and it was empty. my fiance started cackling and I felt humiliated especially with how the gentleman next to him was staring.

I got p**sed and asked him what that was about and he said it was a prank. I asked “really? Did you really think this was a time for pranks?” He was like “it’s alright you can use “a real pen” now”. I pushed the paper away and said “you know what? Never mind because I no longer want you on the deed”.

He lost it completely saying we had a deal and I can’t back out of it just like that, and that it was a stupid joke that I took too seriously. We had an argument and I refused to sign the deed at least not then and there.

At home he blew up again saying I was the one who “delayed the process” and that he already gave me a real pen and all I had to do was sign the “d**n paper” and get it over with. He accused me of looking for an excuse not to have him on the deed and started the silent treatment saying there’s nothing to say til those papers are signed.

Did I really take this too seriously?”

This person said she’s NTA and that there are a ton of red flags to be aware of here. 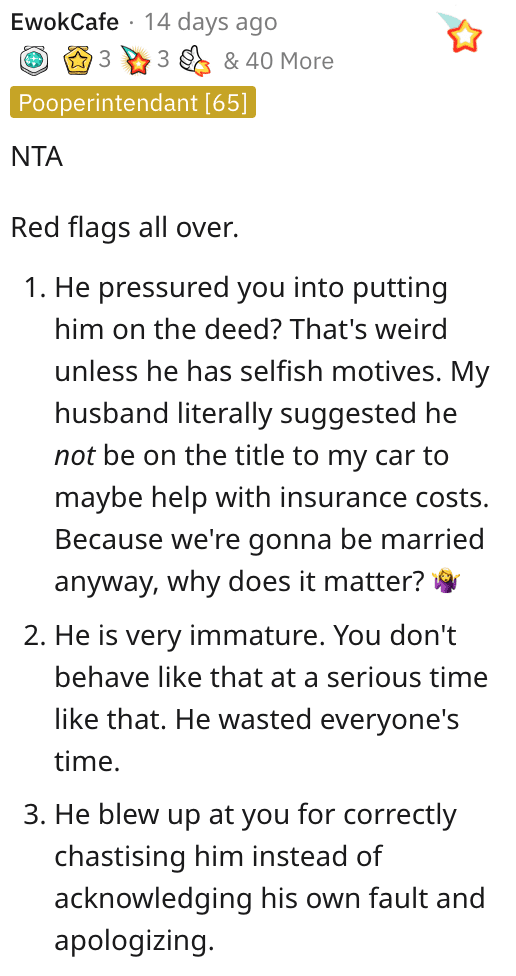 And this reader added another reason why this guy sounds like a nightmare. 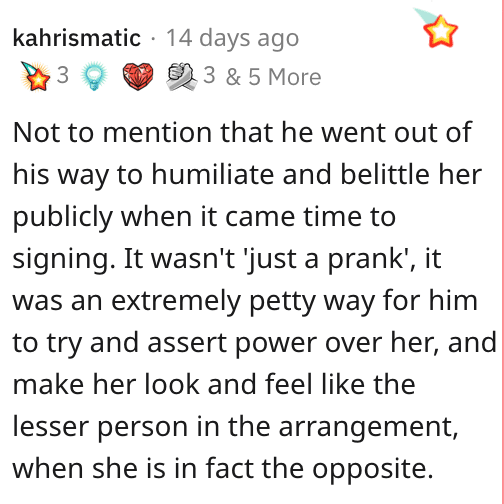 This individual said she’s NTA and this reminds her of someone in her own life.