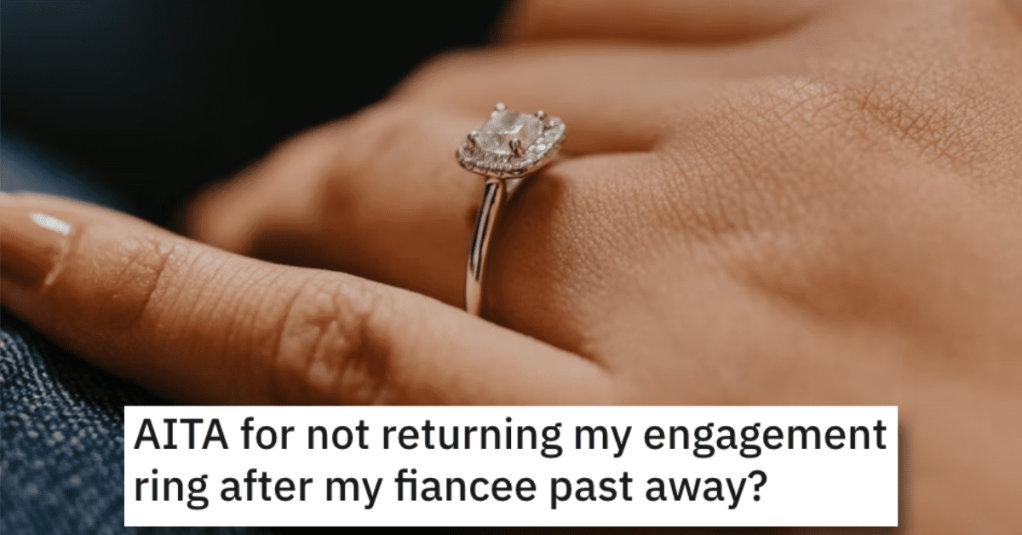 What are you supposed to do if you’re married or engaged and your partner passes away?

What do you do with all the material possessions…especially the ring?

A woman shared her personal story on Reddit about just such a situation.

AITA for not returning my engagement ring after my fiance passed away?

At the funeral (which I arranged and paid for) his brother (32M) Jim asked me when I’m going to return the engagement ring to the family.

For context, the engagement ring with which Jake proposed is an ancient family heirloom. It’s a gorgeous ring but what makes it priceless is the story behind it. Jake got the ring from his grandma a month after we started dating, he claimed he knew back then he would marry me some day and wanted to get his grandma’s blessings on the ring. When he proposed his grandma already passed away so having the blessings put on the ring made it extra special for the both of us.

I asked Jim if he’s serious to which he said yes, apparently his long term girlfriend Stacy saw the ring a while ago and fell in love with it and the story behind it so she kept nagging him to get her something similar, which he couldn’t. He figured since I can no longer marry Jake he can propose to Stacy with it. I told him that he is rude, that the ring was blessed especially for Jake and I in mind, and even if that wasn’t the case bringing it up during Jakes funeral is incredibly disrespectful.

After the funeral I got a massage from Stacy saying it would mean the world for her to be the new owner of the ring and I could always think of her and Jims wedding as the bittersweet ending to my relationship. She said the ring was blessed so one of the grandsons can marry the love of his life, and since Jim is the only living grandson left he has a claim to it. I blocked her.

My ex MIL also reached out to me and said that although she understands my pain I can’t keep the ring since its a family heirloom, so I should suck it up and give it to Jim. I snapped and told her no, the ring is staying with me and following me to the grave if need be. It’s a beautiful symbol of Jakes love and I won’t let Jim and Stacy sully that memory of him.

The ring is legally mine so all they can do is cry about it and be bitter. They keep harassing me on social media saying I’m a bad person and that I stole the family heirloom to spite Jim and Stacy out of jealousy but I ignore them.

Today I met up with my brother and he said that although Jims approach was highly inappropriate, I’m being selfish for keeping the ring as a keepsake. I could always wear different jewelry that Jake bought me in his memory but they could never replace an heirloom that’s been in their family for generations.

I’m now back home and I can’t stop thinking about it, up until this point I was sure I did everything right but maybe I’m just being blinded by my grief.

A friend suggested I ask for an objective opinion and recommend this place, so AITA?” 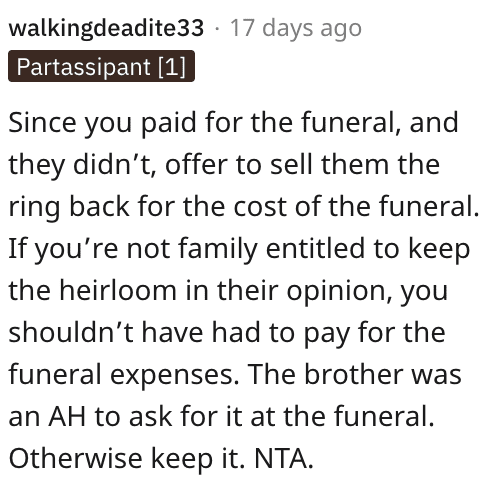 And another person said there’s no way she should give it back. 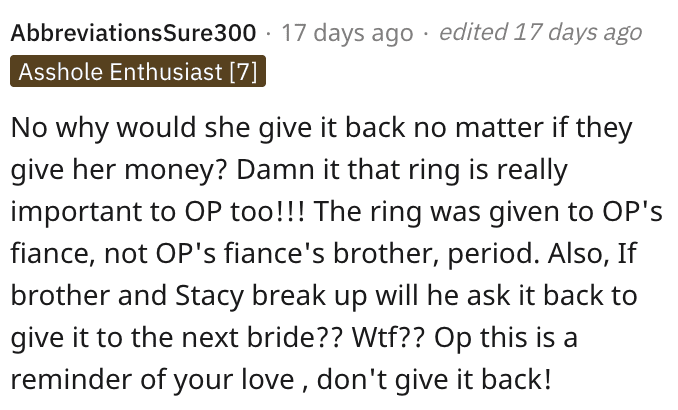 This Reddit user said she’s NTA and that the ring is hers. Period.