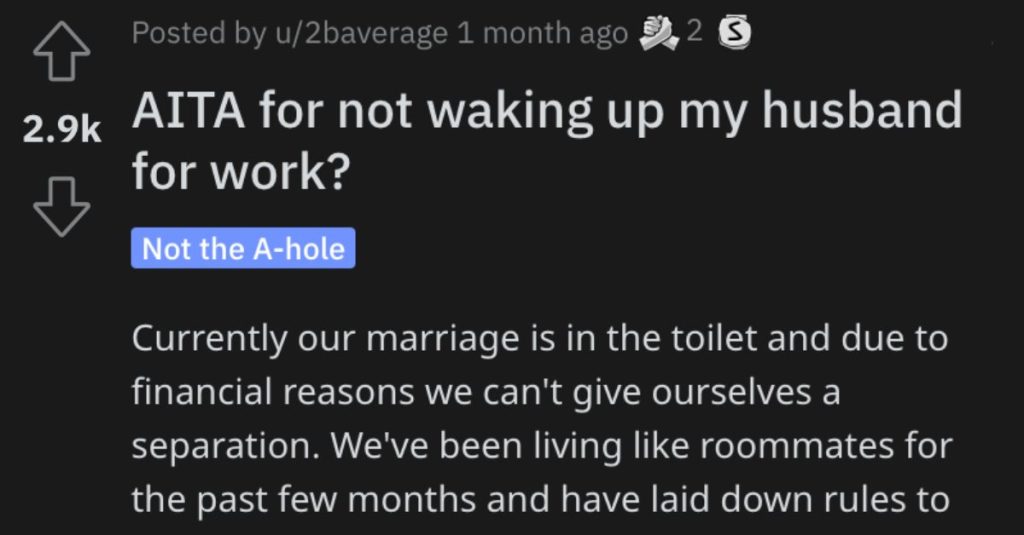 Have you ever had to be a “human alarm clock” for someone in your life?

Someone who just can’t seem to wake up on time no matter how hard they try?

And it seems like this woman is pretty fed up with her husband regarding this issue…so is she an a**hole for not waking him up so he can go to work?

Check out her story and let us know what you think.

AITA for not waking up my husband for work?

“Currently our marriage is in the toilet and due to financial reasons we can’t give ourselves a separation.

We’ve been living like roommates for the past few months and have laid down rules to give us some time and space to think about things. We’ve been together for over a decade and I’ve always been someone who wakes up an hour or more sooner than needed while he’s the type of person who will leave to the airport 20 minutes before his flight leaves, so over the years we’ve gotten into a routine where I wake him up since he usually sleeps through his alarms.

But due to our current issues and us being more of roommates than spouses, I have stopped waking him up. Whenever we carpool together I tell him he’s got about 15-20 minutes to get up and ready before I leave without him. On my days off, I have been trying to make sure I keep my alarms off and let him wake himself up. Over the past few months this has resulted in him calling out of work a lot or him showing up to work an hour or two late.

I had yesterday off but forgot to turn off my alarms, so I woke up, fed the cat, did a few small morning chores I gave myself and then went back to bed within 20 minutes. I nudged my husband to tell him that he needed to wake up or he’d be late; he told me to bugger off.

He ended up arriving to work 3 hours late and came home with a final writeup. If he shows up late again or calls out without a doctor’s note or a really good excuse, then he’ll be fired. He blamed me for not waking him up in time and said that all the writeups were my fault too.

I kind of flipped out on him but it came down to “If you don’t want to be my husband then I’m not going to treat you like one. So, you’re responsible for your own s**t.” Later on when I talked to some friends about it, I got a few mixed reactions.”

One person said she’s NTA and that her husband is a GROWN MAN. 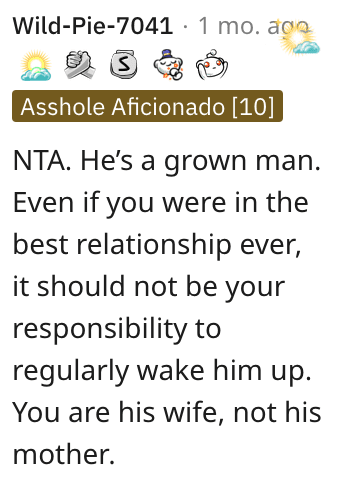 And this Reddit user agreed and said this is not her responsibility.

And this individual offered up some advice about how she might want to help with this problem.