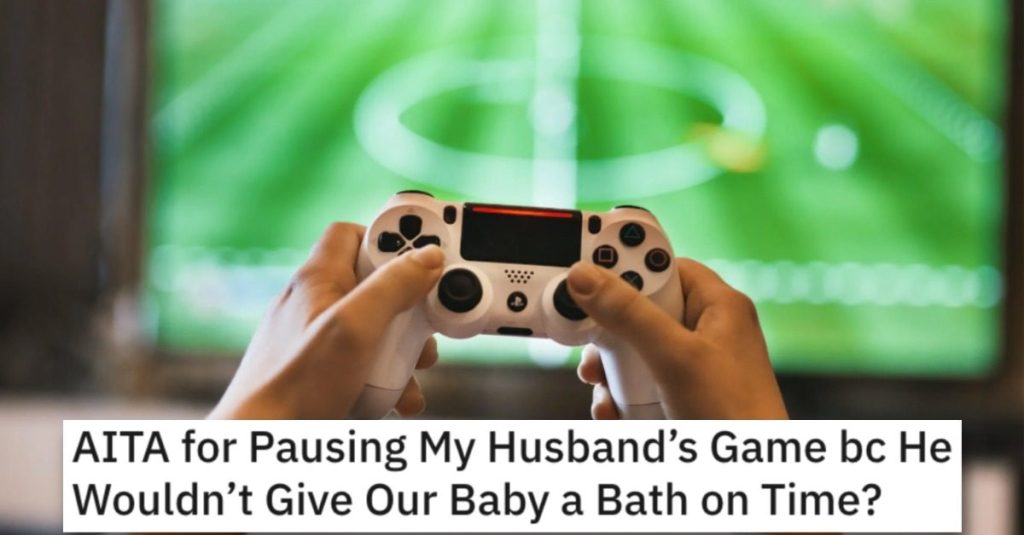 It’s another story from the “Am I the A**hole?” page on Reddit that deals with a negligent husband who can’t be torn away from his video games…

And the question here is whether this woman was out of line for pausing her husband’s game.

AITA for Pausing My Husband’s Game because He Wouldn’t Give Our Baby a Bath on Time?

“I (23F) paused the internet on every single device in the apartment because my husband (23M) refused to get off of the game to give our 8mo son a bath on time.

I know this sounds like YTA but let me explain, there’s a lot of background information that went into this decision. My husband does not help with the household whatsoever. Doesn’t wash dishes, do laundry, clean any room of the house, cook dinner, etc.

He’ll get home and throw off his uniform onto the floor and leave it there until the next day. If the house is dirty, he’ll chide me and tell me that I don’t do anything, I don’t clean enough, I don’t cook dinner enough, etc.

Our biggest issue is the baby. I am the main caretaker for our son 99.9% of the time. I get up with him during the night when he wakes up crying. My husband will here or there, but he’ll start screaming at me about how he needs his rest and I need to get up.

If our son is sick, I’m the one that takes off work. I’ve missed almost 6 week of work in the past 3 months because my husband wouldn’t even ask his supervisor if he could stay home one of those days.

I’m the one that gets up at 6 am and stays up with our son until about 12pm-1PM and that’s when I tell my husband he needs to get up and take care of the baby so I can take a nap (he sleeps anywhere from 8-14hrs a day while I take a nap between 1-4hrs). Once I get up, he complains that I’ve been sleeping “all day” while he’s been taking care of the baby by himself and I’m lazy.

I recently got promoted to E-5 after being up 3 times in a row and taking a hard exam that I studied for. My husband unfortunately didn’t make it this time around and is still an E-3, and he blames me for it, saying if he didn’t have to transfer after a year at his previous command he would’ve made it.

My husband told me that it’s not a surprise that I made it because my job is easy and all we do is sit at computers all day while he works out in the sun and cold on equipment (I’m in intelligence and he’s got a manual labor job).

Then he’ll say he’s joking and didn’t mean to be rude, but this is a constant thing he does. I paused the game tonight because every night we feed our son and give him a bath at 7 pm on the dot. He’s always had this routine. After I fed the baby, I told my husband that it was time for the bath (after I already laid out all the baby supplies and clothes for after bath) and my husband told me to “just sit the baby down in the playpen until he’s done with the game”.

I gently told him no, that it’s bedtime and I wasn’t going to shift our son’s routine so he could play the game for an extra half hour and my husband needs to learn to prioritize.

I then paused the game and my husband flew off the handle, threatening to break my phone and refused to give our son a bath and called me lazy for not doing it instead. My husband literally hops on the game and plays from the moment he wakes up to the moment he goes to sleep.

One person said she’s NTA and she needs to get out of this situation. 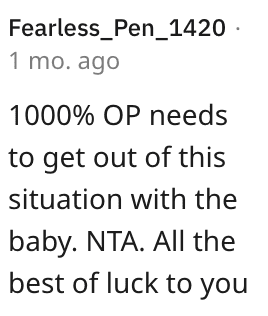 Another reader said she needs to get out ahead of this situation because the safety of her child is at stake.

And this person said she needs to make getting a lawyer and getting away from this guy her #1 priority.