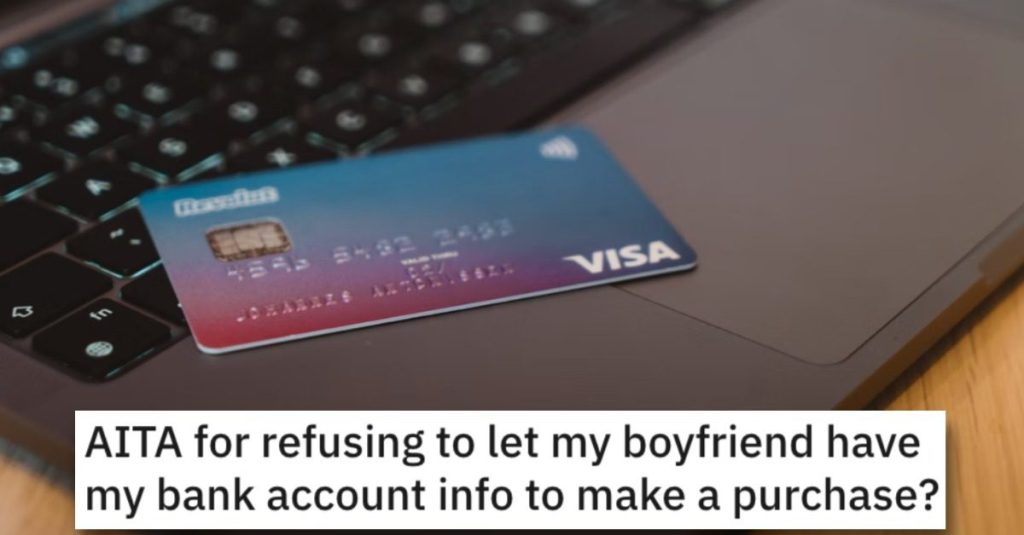 This reminds me of the episode of Seinfeld when George wouldn’t reveal his ATM code under any circumstances.

Do you remember that one?

It’s a good one! And I think George had a point…you shouldn’t give that info out unless it’s absolutely necessary, right?

Take a look at this story and see if you think this woman was out of line.

AITA for refusing to let my boyfriend have my bank account info to make a purchase?

“I f31 have been with my boyfriend m37 for 8 months. He has 3 kids and is a single dad. We’re on pretty good terms regarding almost everything. When it comes to money and spending, we’d take turns to invite each other out weekly (we don’t live together obviously).

Several times he had me pay for his kids purchases. I didn’t make a big issue out of it for the sole reason that those purchases were relatively small, all I had to pay was $30-60.

The other day, he called me while I was at work and sounded like he was in a hurry. He said he just found the gaming device he’s been looking for for so long and wanted to buy it for his oldest son. I asked what’s this have to do with me, and he told me he was short on money and needed $300. He asked me to lend him the $300 and I hesitated but agreed.

His insistence made me uncomfortable so I still said no and told him to either wait or I won’t pay. He got mad at me saying he didn’t get why I was acting like this. He got so loud I had to hung up.

I found him sitting outside after I went home. He was waiting for me and was extremely upset. He asked why I didn’t just send him the account info so he could pull the money we agreed on. I told him I don’t feel comfortable letting anyone have my personal info especially when it comes to finances .

He got offended and said “I’M NOT JUST ANYONE, I’M YOUR F’ING PARTNER!!” Then went on a rant about how he ended up not paying the gaming device after looking for it for so long and now his kid is mad at him and it’s my fault.

We had a fight then he left and told me I’d better have an apology for him AND his son next time I call his phone. …..I haven’t call yet but I feel like I acted stupidly and irrationally. I think I should’ve just given him the info he asked for?.,,I don’t know if I made the right decision.”

One person said she’s only been with this guy for 8 months and him demanding this is out of line.

And this individual said that this guy is gaslighting her. 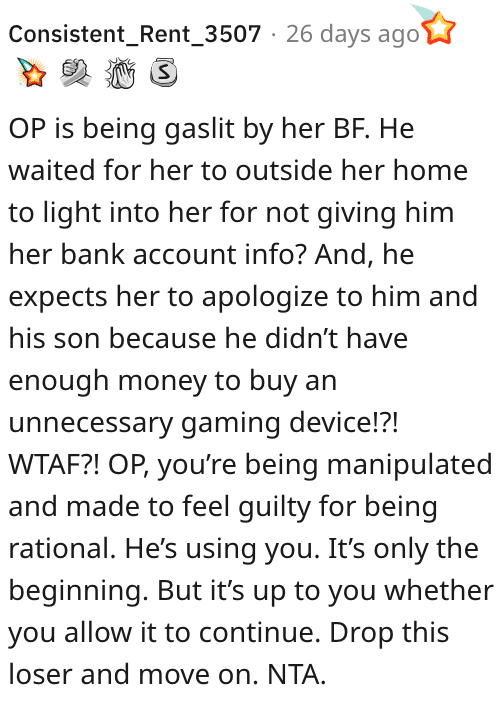 Another reader said she’s NTA and that she needs to run away from this guy. 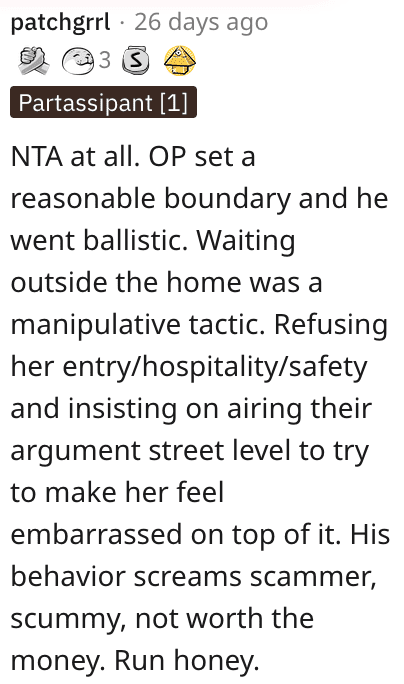