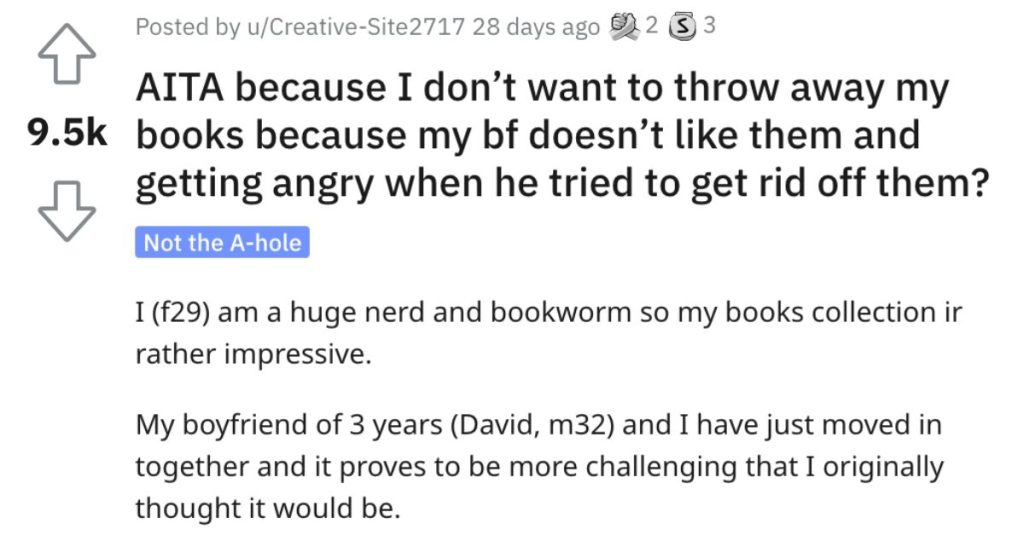 This is just my opinion, but if someone asks you to get rid of your books…GET RID OF THEM!

And that brings us to today’s story from Reddit’s “Am I the A**hole?” page!

Take a look at what this woman had to say and see if you think she was out of line.

AITA because I don’t want to throw away my books because my BF doesn’t like them and getting angry when he tried to get rid of them?

“I (f29) am a huge nerd and bookworm so my books collection is rather impressive.

My boyfriend of 3 years (David, m32) and I have just moved in together and it proves to be more challenging that I originally thought it would be.

As mentioned above, my book collection is rather large but he never mentioned anything about it and the books will be in my office anyway (I work from home). However, there seems to be a slight issue he has (always had?) that he only now mentioned.

I was raised trilingual, and I learned English later in life as well, so technically I speak four languages with English being my weakest so apologies for any mistakes. Because of that, my book collection is rather diverse, including books in all four languages.

If I can, I prefer to read the book in a language it was originally written in and only reach for translations if I don’t speak the language. This has never been a problem and David never mentioned anything about this until now.

He was helping me unpack the books and I had noticed that he put all non-English books in a separate pile. I asked him about that and he said we didn’t need them and to throw them away. I said that you never throw books away, you donate them instead but I didn’t plan on getting rid off any of my books.

He argued that it was pointless to keep books not in English as they only take up space and they’re only for show and no one but me even reads them.

I told him “they’re my books, I could consider downsizing my collection if it was a space issue but since we have the space and they’re in my office, I am not getting rid off them.”

He got really annoyed so I told him that I didn’t need his help anymore.

Yesterday, I went for a coffee with a friend and when I got back home, I found my book shelves to be mostly empty with some candles and figurines placed where my books used to be.

I asked David where my books were and he told me it was a surprise and I came back home to early. His mother came over and help him get rid of all my ‘useless’ books. The bagged them up, put it in his car and he was about to take them to the skip. I was absolutely furious and he told me I could always replace them with books in English.

I grabbed all my books and went to my office. I installed a lock to my office door so he can’t throw them away but I am so very confused about all of this.

To top this off, his sisters called me, one of them screaming her head off because I am an inconsiderate c-word and to get off my high horse and to stop pretending I am better than everyone else. Am I the a**hole here? Am I really wrong about not wanting to get rid off my books?”

This person said she’s NTA and there are huge red flags here.

Another individual added even more to the previous comment. 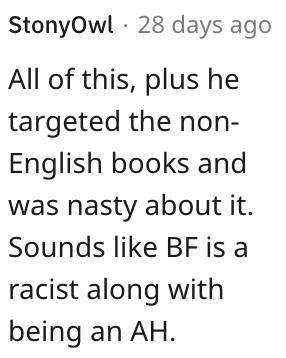 And this individual said her BF is controlling and she needs to kick him out.