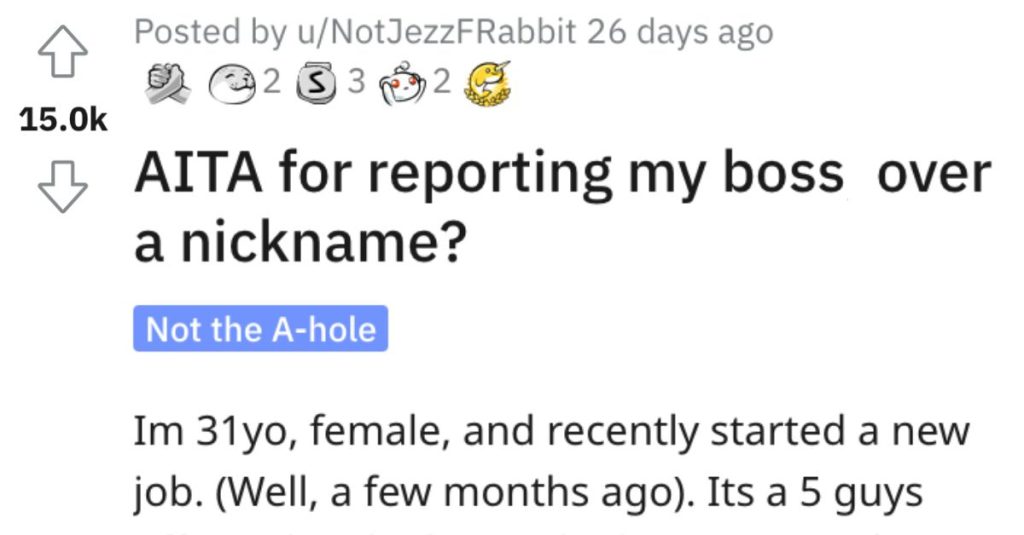 Hey, some nicknames are hurtful and people don’t take to them very kindly.

I remember when I was young there was a girl who got the nickname “Stinky.”

So is this woman wrong for reporting her boss over a nickname she was given?

Read the story below and see what you think…

AITA for reporting my boss over a nickname?

“Im 31yo, female, and recently started a new job.

Its a 5 guys office, plus the boss. The boss is one of those guys who think has a natural charm that ladies would instantly fall for, but he looks like a thumb, and has a lot of dumb confidence for making inappropriate comments, even when talking to me about work issues.

I keep him at arms length, and I’m very professional with my workmates.

Some days ago i was chasing after some workmate, because was procrastinating sending me a document. I went to him to make him send it, and he said “Ok”. Took his phone, opened the messages’ app, and sent me the file, but looking at it, I noticed that he saved my number as “Jessica Rabbit”.

I asked him about it, confused, and looked at me, shocked, eyes wide opened. Just said “Im sorry”. I didn’t let him go, and interrogating him until he confessed that the boss always calls me “Jessica Rabbit”.

To be clear, im naturally a red head, got it from mom, and dye my hair red when it gets darker, but I dont look like “Jessica Rabbit” im flat as a table, yes, I had trust issues about it, and worked very hard to like my body. I despise the thought of being compared to a hyper s**ualized cartoon character.

I talked to my boss when he came into the office, and asked about the nickname. He just said “Because you both are s**y redheads”, I told him to stop it, because I don’t feel safe, he just said “why are you so angry? Its a compliment” I said its not and stormed out.

I went to HR to do a formal complaint, the HR lady said that she’ll process the complaint, but that it was worthless, because “Boss is just like that”. I told her that I dont like my boss’ attitude, and need a warrant to stop.

Since then, my boss stopped talking to me, and my workmates say that I’m way too dramatic, and dont know how to take a compliment, they also complained that don’t feel safe around me, because they dont know if I will twist their words somehow.

This person said she’s NTA and that this is harassment. 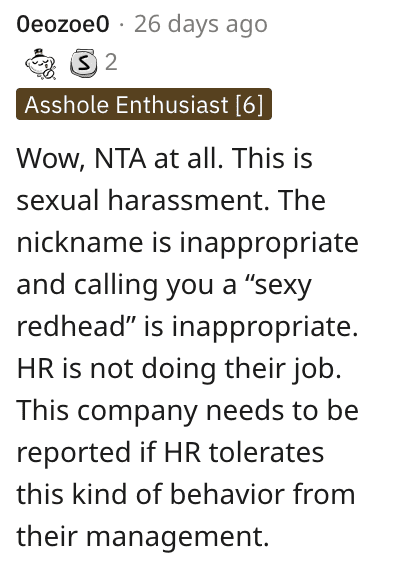 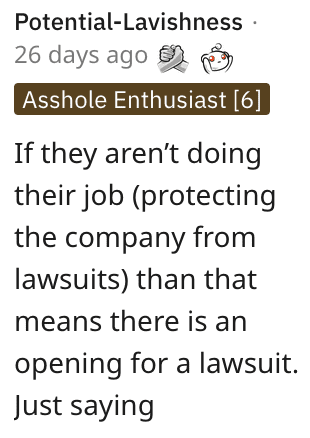 And this Reddit user said she should hire an attorney if they retaliate in any way. 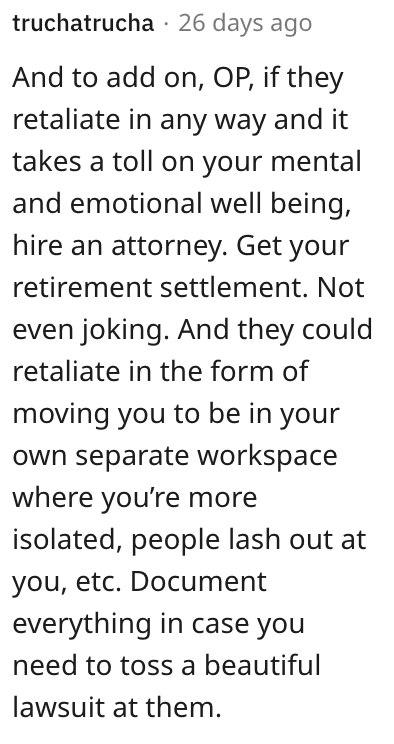