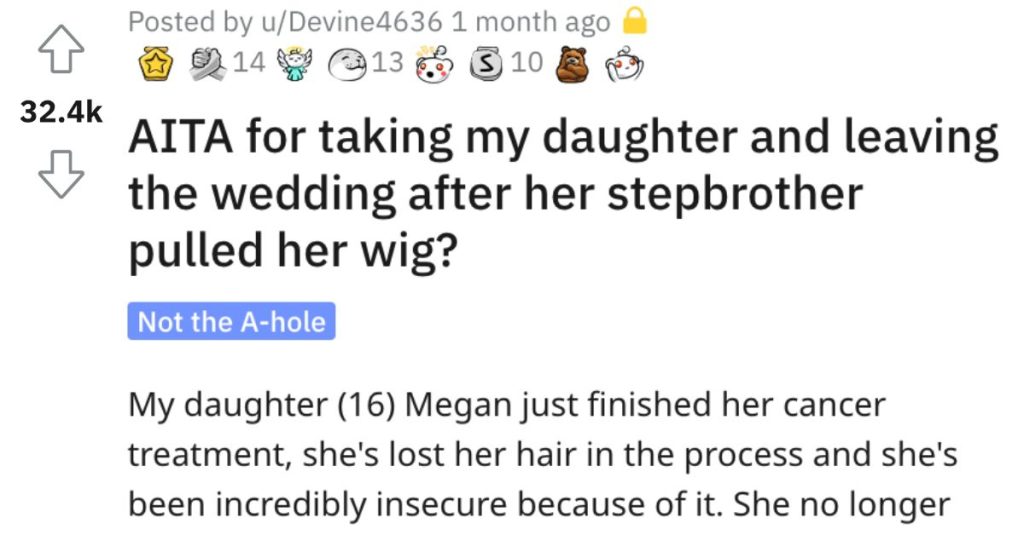 And a woman took to Reddit’s “Am I the A**hole?” page to ask if she was wrong for taking her daughter and leaving a wedding after an incident.

Read on to see what happened and let us know what you think in the comments.

AITA for taking my daughter and leaving the wedding after her stepbrother pulled her wig?

“My daughter (16) Megan just finished her cancer treatment, she’s lost her hair in the process and she’s been incredibly insecure because of it.

She no longer meets friends nor welcomes them at our home nor even meet family on person. It’s been bad to say the least but her stepbrother (18) Ben has been making it worse with his nagging comments and jokes about her looks. He tried taking and posting pics of her secretly to share but I shut that down even though my husband thought it was just “harmless teasing”.

My husband’s sister’s wedding was last week. The family wanted Megan yo go but she didn’t want to. I spent so much time trying to help her and convince her to start socializing again and see family. She agreed under the condition that I let her wear a wig which I agreed, not only that but I took her shopping to pick her own wig and she looked beautifully stunning in her pixie hairstyle wig. My husband and Ben laughed when they saw it. I don’t know why.

We went to the wedding and everything was going well til this happened. We were all sitting and we started talking about Meghan look, suddenly Ben reached out and pulled her wig and exposed her head. I was shocked I froze but Megan yelled then took her wig and ran.

Ben, his cousins and some guests started laughing. I was upset especially when looked over my shoulder and saw my husband sitting next to his mom and laughing. I lost it on Ben and berated him infront of everyone then took my stuff, got Megan and got into the car and went home. Ben and my husband didn’t have a ride home and my husband kept calling me but I didn’t respond.

He came home asking about me leaving mid wedding and upsetting his sister and then leaving him and Ben with no rude home. I argued with him about how Ben embarrassed Megan and humiliated her publicly which must’ve ruined what’s left of her self esteem. He said that it was just “kids teasing each other” and that I overreacted and Ben had no malicious intent he was just messing with her.

I said I was sick of it but he said that this is their way of bonding as stepsiblings and I was getting in the way of it and being overprotective and unreasonable. We didn’t talk after that and Ben is refusing to apologize and his dad is backing him up.”

This person said she’s NTA and that she needs to divorce this guy, pronto! 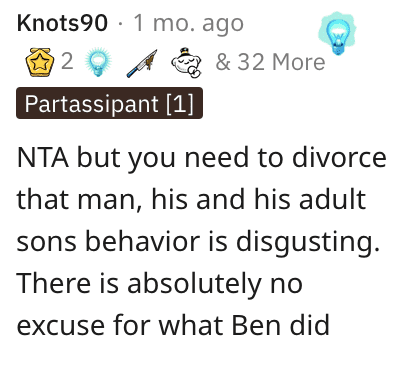 Another Reddit user agreed and said she needs to set a good example for her daughter. 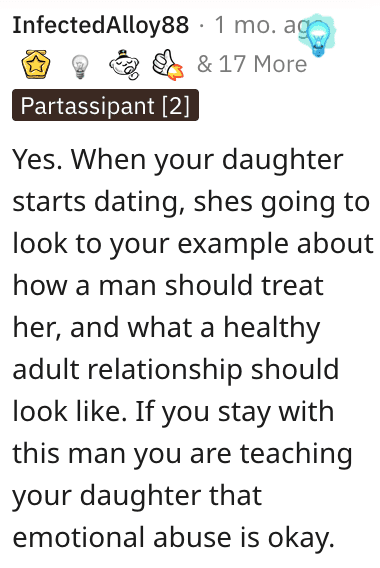 And this individual said this woman is an a**hole for staying married to this guy. 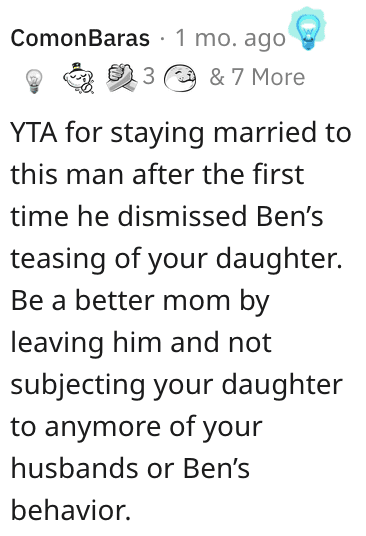