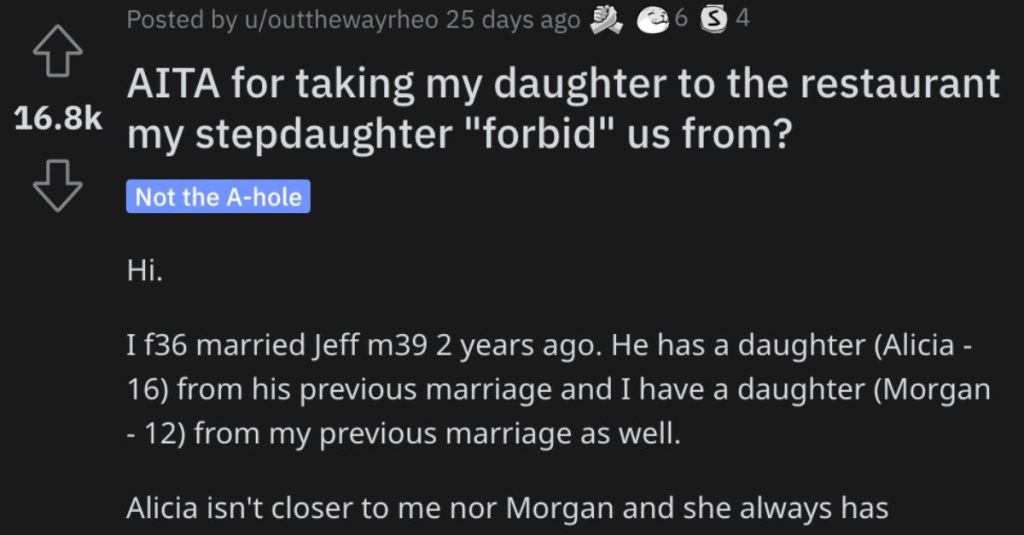 You are forbidden from going to that restaurant!

Well, that’s not something you hear every day, huh?

There’s a surprise behind every corner!

Read on to see what happened in this case….

AITA for taking my daughter to the restaurant my stepdaughter “forbid” us from?

Alicia isn’t closer to me nor Morgan and she always has something to be upset about. for example, when me and Morgan moved in with her and Jeff, she tried to control where we can & can’t go. What areas I was allowed to redecorate and put my furniture in, what room Morgan got etc. Her excuse was that she wanted to keep the house how her mom left it as much as possible. Jeff asked us to be more patient and she’d come around eventually.

She did come around, but still tries to control other areas of mine and Morgan’s life. I had a million conversation that ended up with her throwing a tantrum. Jeff talked to her and told her to not try to control what Morgan and I do, ever. And she agreed.

Morgan’s birthday was days ago, We planned to celebrate at a restaurant and let Morgan choose which one. She picked a really nice restaurant that isn’t over the top expensive and we agreed the party would be there. However, When Alicia heard which restaurant we were going to she went off on me and Morgan and said that we can’t go to that restaurant because she had tons of memories there of her “perfect old family” and she won’t let us taint the memory for her.

I found this beyond illogical and unreasonable. I told her she could stay home but she said it wasn’t about her being there – it was about the idea of me and Morgan being there with Jeff as “family” when it used to be her, her mom and Jeff.

We got into an argument and Jeff told me to tell Morgan to just pick another restuarant but I snapped and told him Alicia had no right to dictate where me and my daughter go and he shouldn’t be encouraging her. He told me he wasn’t encouraging anything, just trying to keep all parties satisfied. He told me to get Morgan to change the restaurant or he won’t go..That was it for me, I decided I wasn’t going to change it just because they wanted me to and ended up going with morgan to celebrate with just my mom.

Morgan of course felt upset her stepdad missed her birthday celebration. when I pointed this out to him, he argued that I literally gained nothing by insisting on this particular restaurant and upseting Alicia (who is refusing to speak to any of us even him) and ruined his relationship with Morgan. I said it was Morgan’s choice but he said I was the adult in this situation and have failed to navigate through it.

AITA for still going to the restaurant although Alicia forbid us from it? I just wanted to make Morgan feel like she has a say and right to spend her birthday however she wanted.”

This person said that her husband needs to step up and be an adult and that Alicia probably needs some counseling. 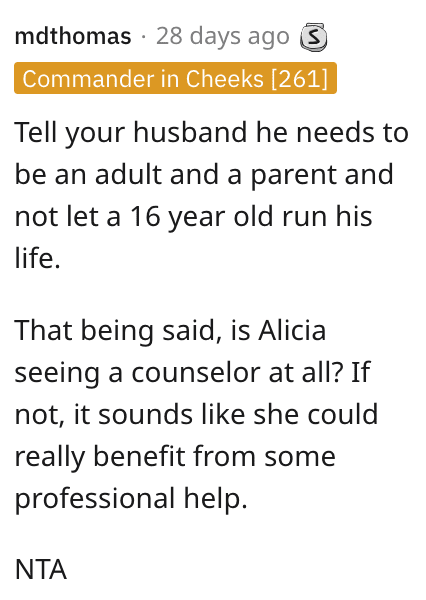 Another individual said that Alicia AND the dad both sound like they need some therapy. 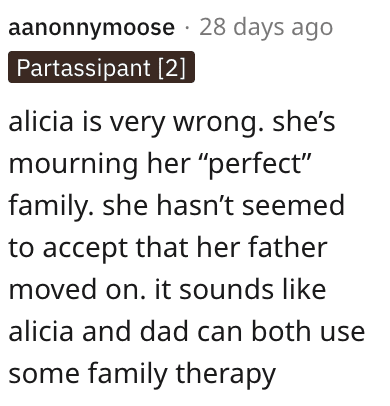 And this Reddit user said this woman is NTA and that there are a lot of cries for help in this story. 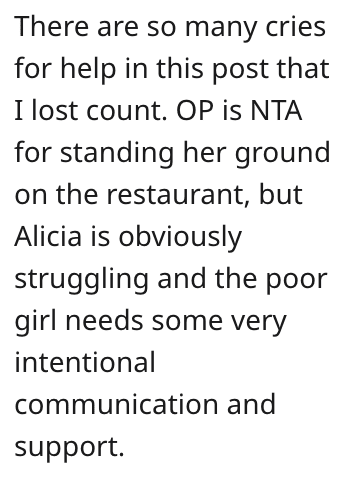