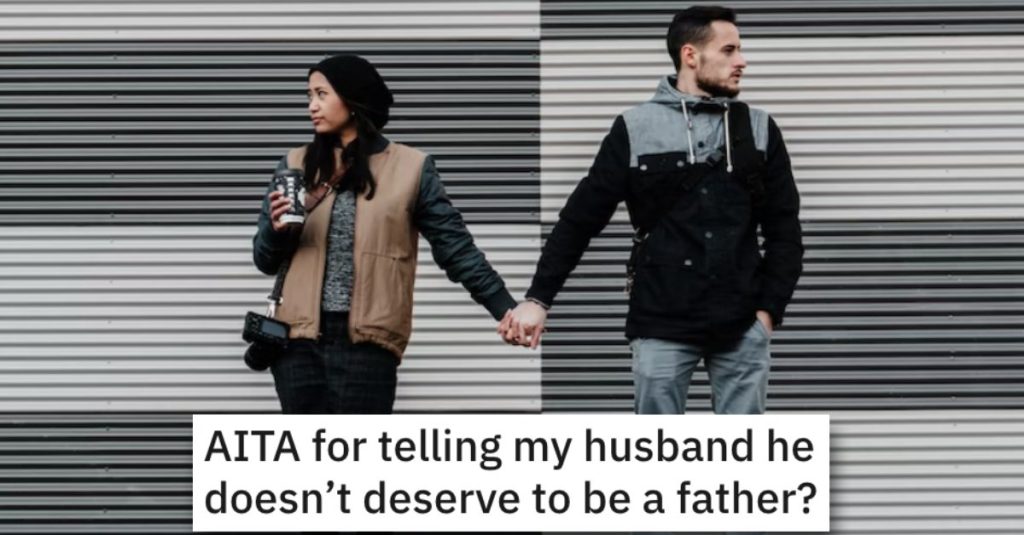 Some of the stories that get posted on Reddit’s “Am I the A**hole?” page seem to be blown out of proportion by one person or another, but to tell someone they don’t deserve to be a father?

But did this woman go too far when she said this to her husband?

AITA for telling my husband he doesn’t deserve to be a father?

When we met we were both looking to settle down and have kids so it felt like fate that we met. We started talking seriously about having kids around 1.5 years in, and started trying at 2 years. After three years of trying and heartache, we decided to adopt. Following a long and hard journey, we were finally able to welcome home our beautiful daughter, Sophie!

My husband was a wonderful father to Sophie, he loved holding her and being with her. He would rush to her side when he heard her cries. I couldn’t have wished for a better partner and father for my children. Just after everything settled down with Sophie, we got pregnant.

Both Dennis and I were elated to hear we would be having another child, and ecstatic when we found we were having another little baby girl, so close in age to her sister! But I started getting worried when I heard some of Dennis’ comments as I started to show more and we got closer to birth.

He once even said “I can’t believe we’re finally having our own baby”. I questioned what he meant by this as we have Sophie already, but he brushed it off saying I knew what he meant but didn’t say it again to me.

When I gave birth, Sophie was 11 months old and had been saying “am am am” whenever she stroked my belly, so we decided to call our daughter Amy. When we brought Amy home is when Dennis’ behaviour really started to slip and lack towards Sophie.

He stopped giving her attention, documenting or even caring about her milestones. He started actively trying to avoid interactions with Sophie, eg if I asked him to tend to Sophie if she were making a fuss, he would go to the cot and say that he can’t as he is tending to Amy.

Sophie is clearly being impacted by the sudden loss of her father so once the kids were in bed tonight I asked him what is going on with him. He told me that since Amy was born, his love for Sophie has “died” (he then retracted, and reworded, saying “dimmed” instead).

I was horrified, I told him I couldn’t believe what I was hearing. He tried to calm me down by saying that perhaps we could “split” them, he’ll take Amy and I take Sophie. It almost felt like he was making a really sh**ty joke. I called him a terrible person and told him he didn’t deserve to be a father.

I told him that I feel betrayed and repulsed by him for using one child as a trial for the next. He left the house and hasn’t come home since. It’s snowy here and it’s getting on for 2am and I’m getting worried.”

This reader said she’s NTA and that she needs to divorce this guy. 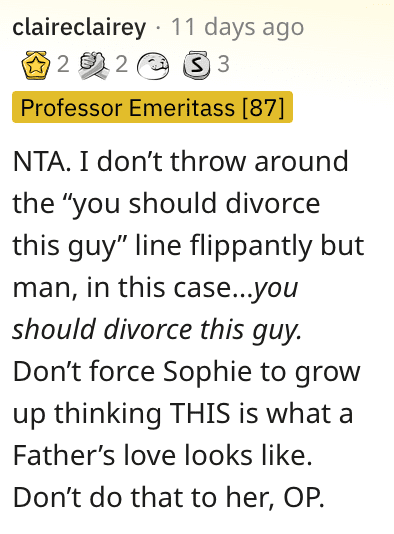 Another reader said he either needs to go to therapy or they should split up. 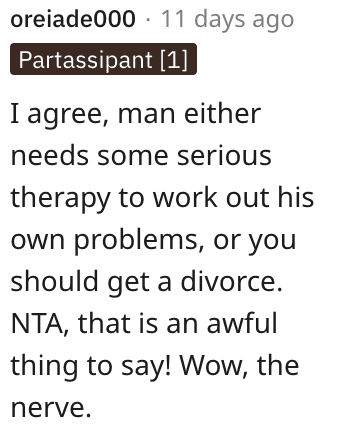