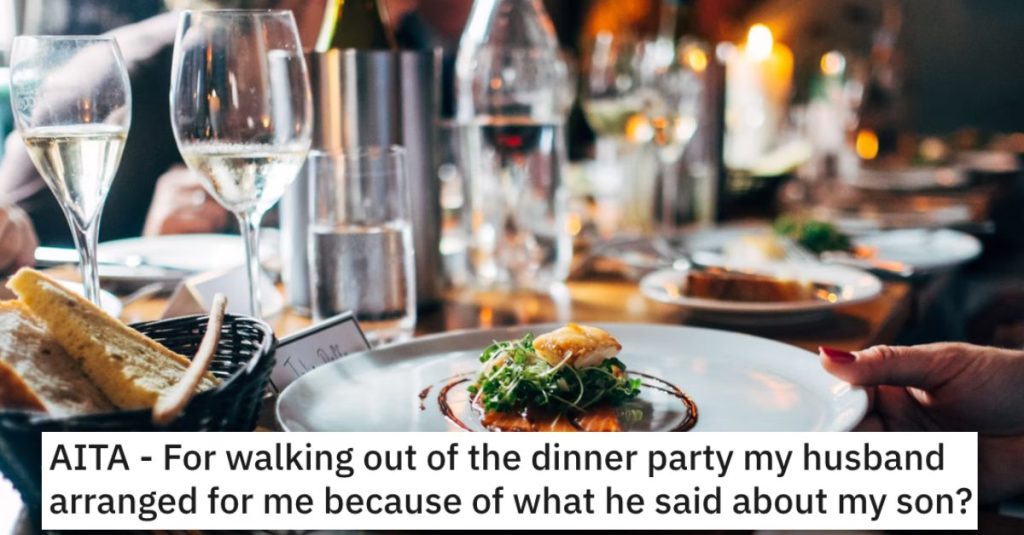 I guess it’s not a good habit to get into, but sometimes you just gotta walk out of somewhere if someone really, really offends you.

Even if it happens to be your own husband…

Ouch, I have a feeling that this is gonna get ugly.

Check out this story and see if you think this woman went too far.

AITA for walking out of the dinner party my husband arranged for me because of what he said about my son?

His stepded (my husband) had known and lived with him for 3 years of his life. When my son passed away my husband arranged for 2 funerals (one in the town we live in and another in his hometown) and hosted a charity event in his memory. that reassured me that he adored Travis and saw him as his own.

Now I recently found out that I’m pregnant with my first child with my husband. My husband was beyond thrilled he hosted 2 dinner parties, one in our town and the other in his hometown with his family. We were staying at a hotel but spent sometime with his family before dinner where we broke the news.

At the restaurant, and while everyone was eating. My mother in law was talking about the baby and made a comment along the lines of “let’s pray that my grandson will have similar traits to his stepbrother (she was referring to Travis which was nice of her).

My husband chuckled and said “well, I don’t know but I’m telling you that at least this one will be smart”. I was baffled completely. I glanced at him and he still had a smile on his face like he didn’t just insult my son. I was fuming inside, I apologized to my mother and father inlaw then I said I was going back to the hotel. My husband asked what’s wrong and I told him he just insulted my son, his stepson.

He leaned back and insisted I sit back down because I was over exaggerating but I refused to listen and went back to the hotel. He came and blew up on me saying I embarrassed “the f**k” out of him infront of his family by walking out of the SECOND dinner he arranged for ME to celebrate MY pregnancy just because I took “offense” to him saying he expects his child to be smart.

I replied that he insulted Travis’s intellegence with his comment but he said that his “jab” or whatever I CHOOSE to call it was directed at Travis’ biological dad and his intellegence but that still doesn’t change the fact that he thought Travis was stupid. He said he had it with me and told me to get over myself then started basically stone walling me.

Am I overreacting? did I have the right to get offended on my son’s behalf?”

Check out how people on Reddit reacted to what happened.

This reader said the woman’s husband is a major a**hole. 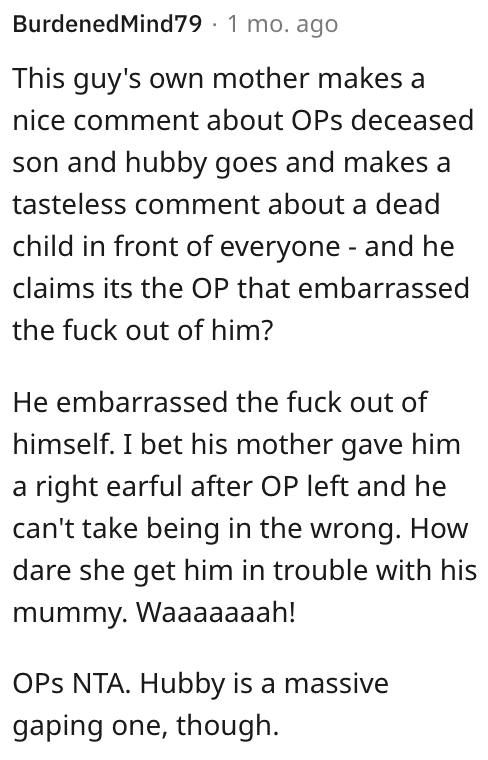 And another Reddit user said the husband definitely was taking a swipe at her son. 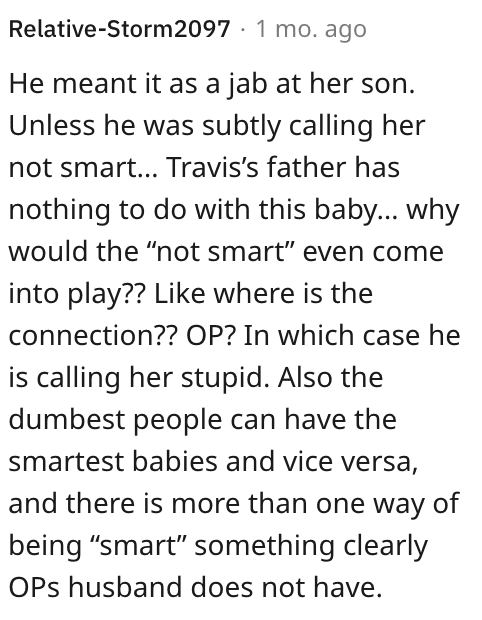 And this individual had an interesting observation about the two funerals the husband planned. 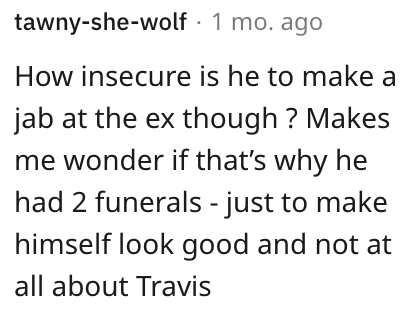 What do you think about what happened in this story?