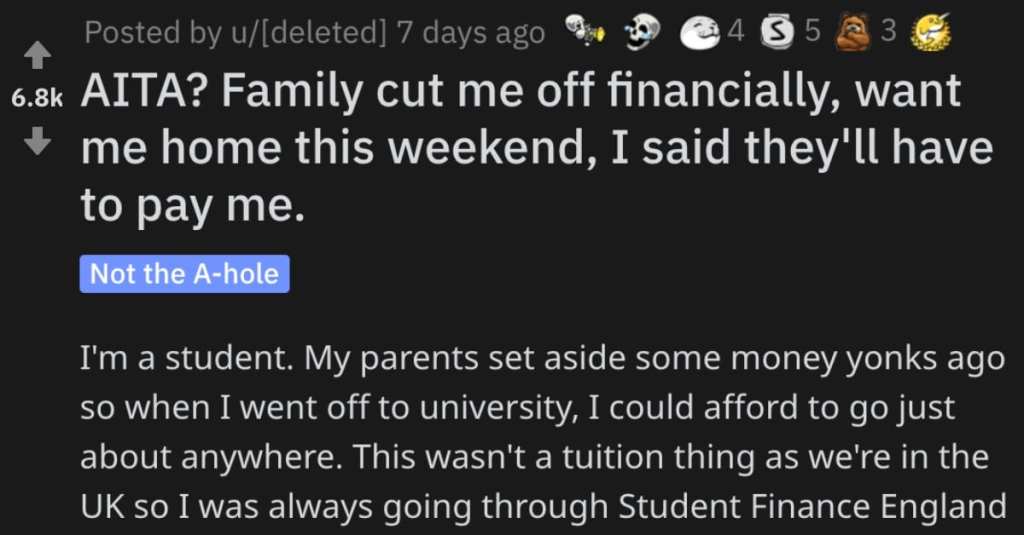 Woman Cut Off Financially From Her Family Says, “Pay Me if You Want Me to Visit.” Is She Wrong?

You want me to come visit?

Maybe I should start doing this to people…

Well, maybe not, but it’s an interesting concept!

And a young woman issued this demand to her family after they cut her off financially. Let’s see what went down.

AITA? Family cut me off financially, want me home this weekend, I said they’ll have to pay me.

My parents set aside some money yonks ago so when I went off to university, I could afford to go just about anywhere. This wasn’t a tuition thing as we’re in the UK so I was always going through Student Finance England (SFE) for that, but some areas of the country are way more expensive than others due to the cost of living, as it gets higher around the best universities. I got into a uni with a very high cost of living.

My parents were giving me the money meant for me in installments, just like SFE does. I got a part time job to top it up.

Then I got pregnant. I figured I could keep the baby, provided I didn’t suddenly lose any income. My parents then decided to stop giving me the money they set aside for me, saying it was for my education only. I then went over my options again and realized I would have to go full time to just to make ends meet, which I did, but I had to make a lot of compromises to make it work.

It’s been like this for about a year. I gave birth late last August, making my daughter just over 7 months old. Myself, my parents, and my sister have all had our first jabs, and nan is fully vaxxed. Dad’s birthday is this Friday, and nan’s is on Tuesday, so my parents want me and my sister to drive to nan’s house this weekend to celebrate both events.

I’ve said I can’t afford it. It’s a 6 hour drive each way, so I’ll miss at least 1, most likely 2, days of work. My parents asked me to rearrange what I could, pointing out that I should get money from SFE next month (it actually came a week ago) so I can afford to miss work for a couple days.

They said that as they haven’t met the baby yet, and we’ve not seen each other in a year, they want to see us now. I said if they want to see us they can pay me, as I can’t afford to lose any wages now they’ve cut me off. They said that’s incredibly unfair of me and they can’t believe I’d try and guilt trip them over what they did with their money.

I offered to facetime my sister, who could put me on with mum, dad, and nan, if I had time, but they said me mentioning time constraints was further guilt tripping and I shouldn’t expect them to pay for my presence, that I was being tactless and selfish, and that if I attend, they don’t want to hear about money.

I told them that they’ve created this situation and if they’re seriously shocked that I can’t afford to take a cross country trip with 2 days notice then they have no clue what the real world is like for someone who is a full time student, a full time worker, and a single mother, so I now have an appearance fee.

My sister’s boyfriend also got his SFE loan early, like I did, so she’s said that I already have the money from SFE, and that me wanting an appearance fee is greedy and entitled, bordering extortion, and that I’m trying to make our parents feel guilty about money I have no right to.

Here’s how people responded to the story on Reddit.

This person said that the woman is not in the wrong here and her family should travel to her if they want to see her so badly. 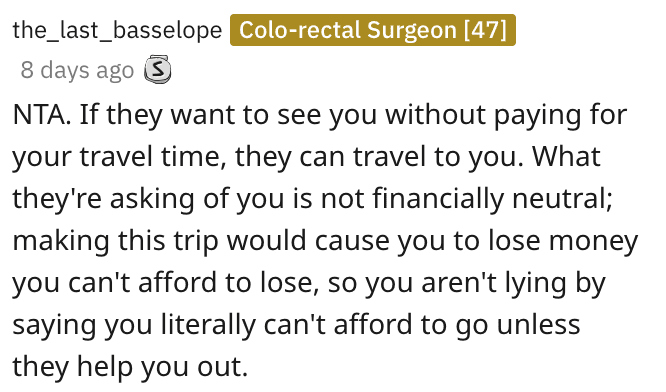 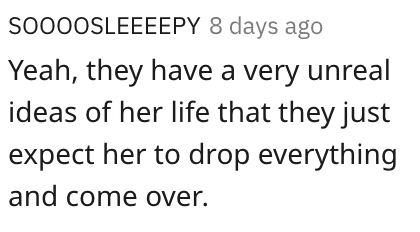 Another individual said that the woman needs to avoid JADE. Read on below to find out what that stands for… 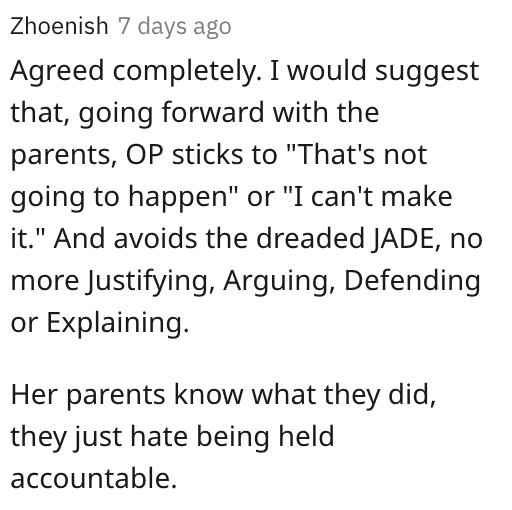 This reader said that her parents seem a little demanding and that a lot of people probably wouldn’t even be able to get off that time so quickly. 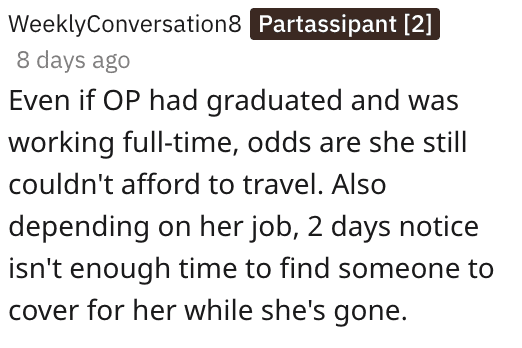 Lastly, this person said the woman is not an *sshole and that her parents cut her off at a very vulnerable time in her life so they can’t expect much from her. 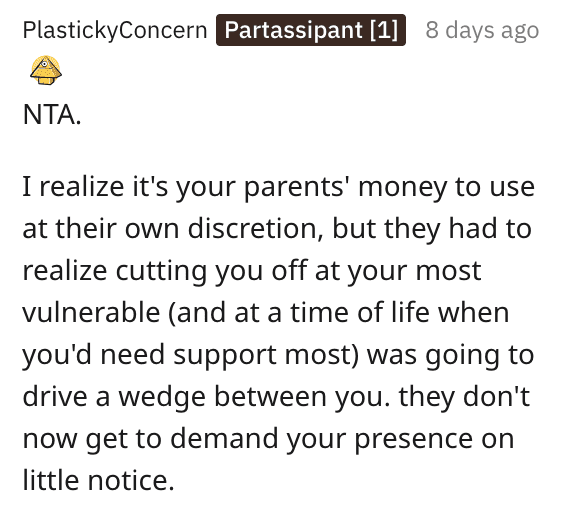 What do you think about this woman’s story?