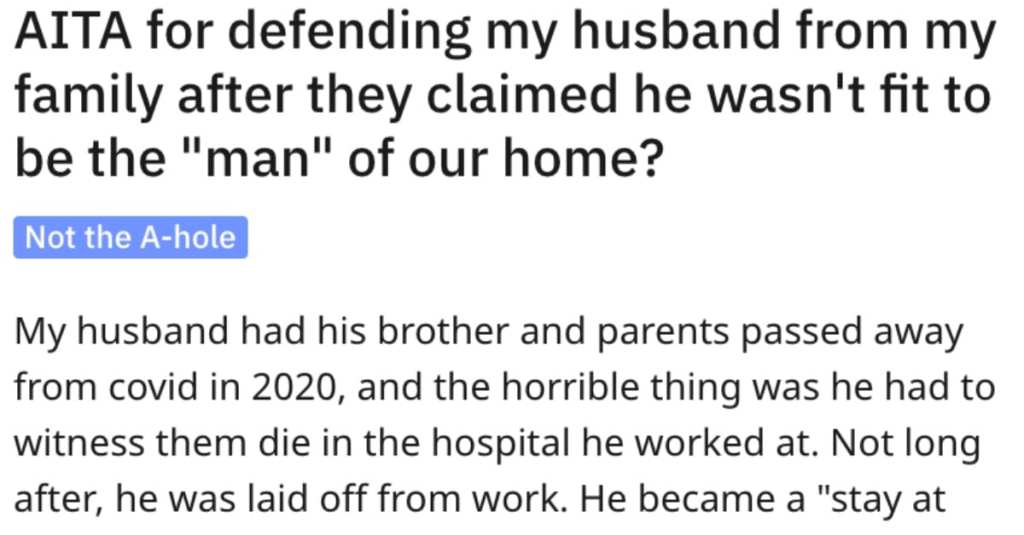 Woman Lashed Out at Her Family When They Said Her Husband Wasn’t Fit to Be the Man of the House. Was She Wrong?

Everyone has a different idea of what it takes to be “a man” or “the man of the house”, but people also need to learn to be compassionate about what other folks are going through: and they usually need to keep their mouths shut.

And that’s what caused a woman to lash out at her family when they said her husband wasn’t fit to be “the man of the house.”

The woman took to Reddit’s “Am I The *sshole” page to ask for advice from the readers there about if she was wrong for doing that.

AITA for defending my husband from my family after they claimed he wasn’t fit to be the “man” of our home?

“My husband had his brother and parents passed away from covid in 2020, and the horrible thing was he had to witness them die in the hospital he worked at. Not long after, he was laid off from work.

He became a “stay at home father” except our two girls are grown up and self-reliant so didn’t need him. He was no longer emotionally present with me in our time together in the months after he was laid off, and our girls picked up on our disconnect, and told me he wasn’t present with them as well.

A lot of days I’d see him sit by himself and not talk to anyone or anything. Sometimes I’d see him in our bedroom weeping and asking what his life had come to. It was clearly depression.

After awhile, he couldn’t be physically intimate with me except when I initiated it and I struggled with body image issues at first because of the lack of love making (until I realized he was depressed and understood why it dried up).

Emotional conversations were also very tough for him as he would shut out anything of that matter. When I suggested grief counselling many many times, he said he was strong and didn’t need it.

At a small get together at our home (my brother, sisters, parents and other relatives and their children along with me and my husband were present, my girls were with friends), my siblings found my husband having an anxiety attack, repeatedly rambling he “was going to be all alone” and he “was going to die”, complaining of chest pains.

My brother laughed at him and thought he was joking, my sisters laughed at first too but when they realized it was serious, called for an ambulance. I was furious at my sisters and brother for treating this as a joke.

The other day, my parents said they wanted to see me with my siblings privately, without the girls or my husband with me. Immediately, my parents questioned whether my husband was stable and if he needed mental treatment.

I said yes and that I was slowly making sure the idea of a counsellor would be palatable for him. My mother said my husband was “a loon”, my brother and father agreed, and my sisters laughed at their words.

This really upset me and I said they knew nothing about me or my husband and that he was still struggling with the death of his relatives and losing his job. My father was more serious after this and said that as he was, my husband could never be “the man” of the house and support our daughters through life and treat me like a queen if he was blabbering on about death and being mopey all day.

He then said I should consider leaving him. And that just infuriated me. I told my father to shut up and that my husband is so strong for bearing all of that loss and that he’d never understand what it’s like to lose your family in the space of a week. I then told them not to call my home or contact my family until we were comfortable with it.

I told my girls all this and they are in full support of me defending their father. But my husband thinks I made him look spineless. AITA?”

This person made no bones about it: the woman’s family is pretty awful. Also, they think her husband needs to be in therapy for his own good and the good of the family. 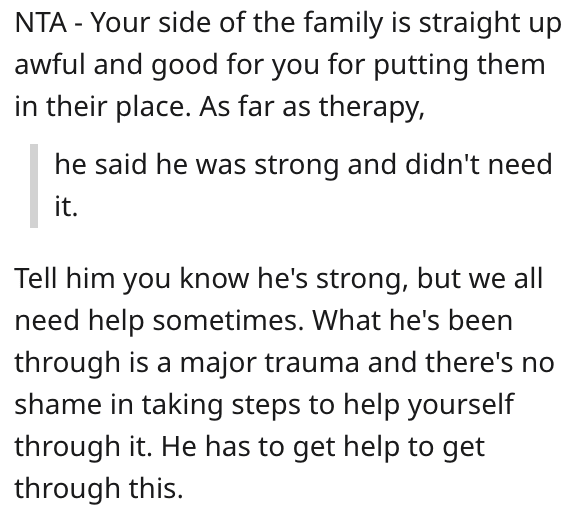 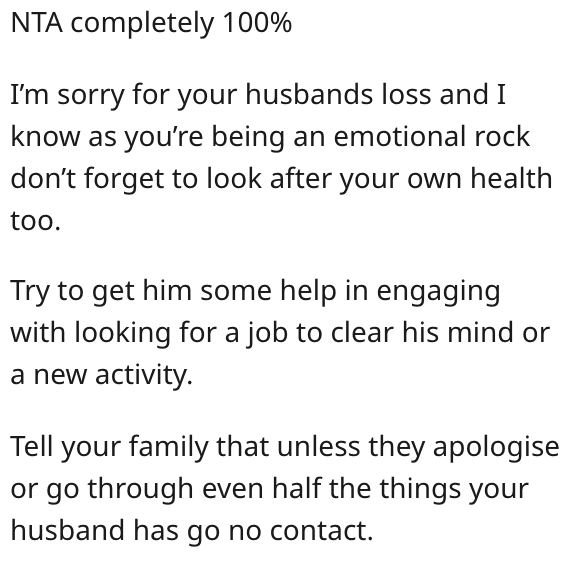 This Reddit user also argued that the woman’s family is pretty terrible.

And they also pointed out that her husband would definitely benefit from going to therapy. 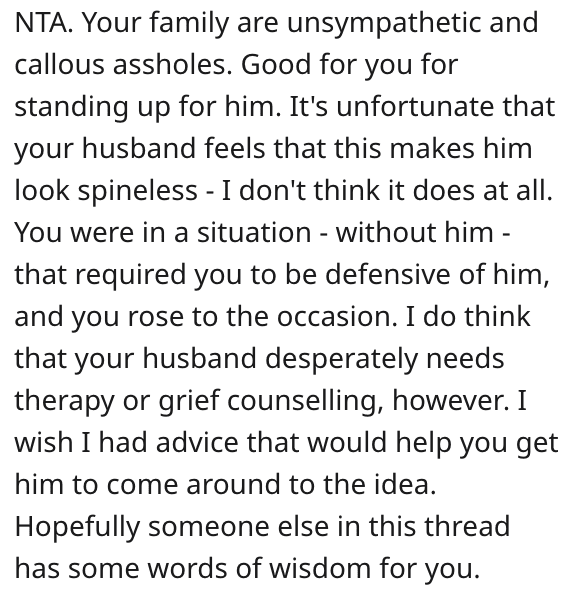 Another person pointed out that the writer’s husband is going through “complicated grief” and that, yes, her family is being very inconsiderate. 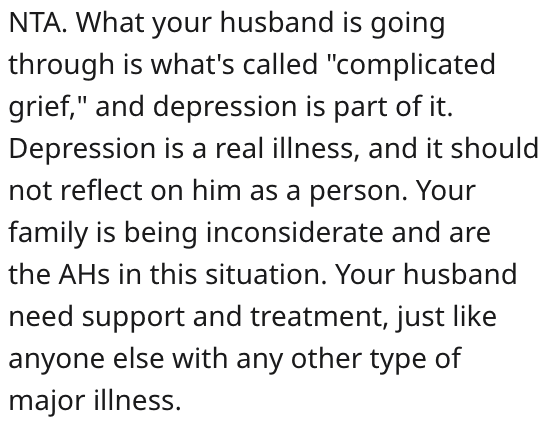 And finally, this person has a unique take on the situation. They said the woman was right for defending her husband but that she definitely should not have held a family gathering during the pandemic because it was only natural that it would disturb her husband. 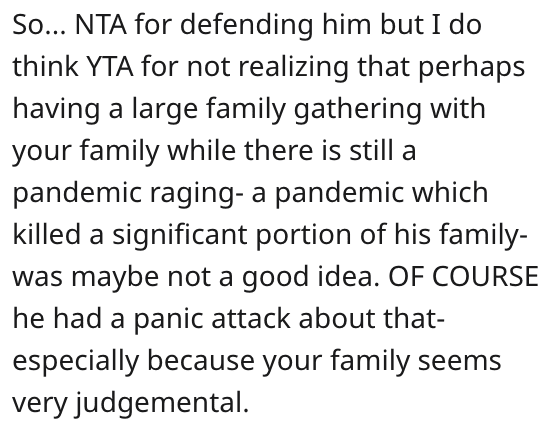 This is a very touchy situation, indeed…

And now we want to hear your opinions.

In the comments, tell us if you think this woman was right or wrong in her actions.