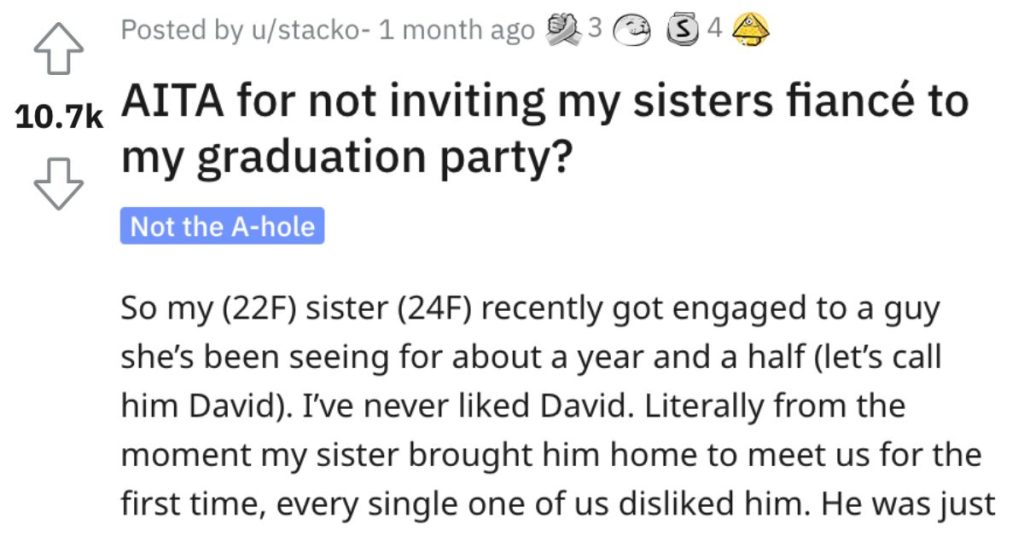 And that, my friends, is the basis of this story from Reddit’s “Am I the A**hole?” page.

Read on to see what went down!

AITA for not inviting my sisters fiancée to my graduation party?

I’ve never liked David. Literally from the moment my sister brought him home to meet us for the first time, every single one of us disliked him. He was just a very rude guy who didn’t seem to have any manners at all. Literally the first time I met him, he said my sister got all the looks in the family as a joke..

My sister stopped telling me anything about him because she knew I don’t like him and will probably talk s**t. But 3 months ago or so, we found out he cheated on her with his ex who also happens to be the mother of 3 of his kids. She packed her stuff and left him for about a day.

Although I was devastated for her, I was so happy she found the strength to leave him and know she deserved better. Literally not even 24 hours later, he proposed to her, gave her a speech about how much he loves her and can’t see his life without her, and she cried of joy and said yes. sigh..

Anyway, I’m having my graduation party in 2 weeks. My sister called to ask what she wanted “them” to bring me as a gift. I asked her who “them” was as I already previously told her I never wanted to be around her fiancé. I thought it would be obvious I wouldn’t want him at my graduation party. The last time I saw him, we had a fight because my sister sent him to pick something up from my house, but he was “busy” so he sent his friend.

A friend who I literally exposed for stalking me when I was in high school. He used to harass me to date him and would literally drive to my high school to stare at me for a while, then leave. I had so much anxiety for so many years because of him. David knew d**n well this guy used to stalk me when I was in high school, but he still sent him to my house and now that a**hole has my address. When I called him out, he said I was being dramatic and that I like making a big deal out of everything.

Anyway, I told my sister I don’t want him at my graduation party. She said I was being unreasonable, and that I should understand they come as a pair now. I told her that’s completely fine, and that the pair of them can simply not attend my party then. She said I was being a b**ch and that after all we’ve been through as sisters, I’m “letting h**e win”. I feel like I’m quite justified in not wanting him to attend to be honest.

Check out what Reddit users said about what happened.

This person said she’s NTA and they had a word for the woman’s sister. 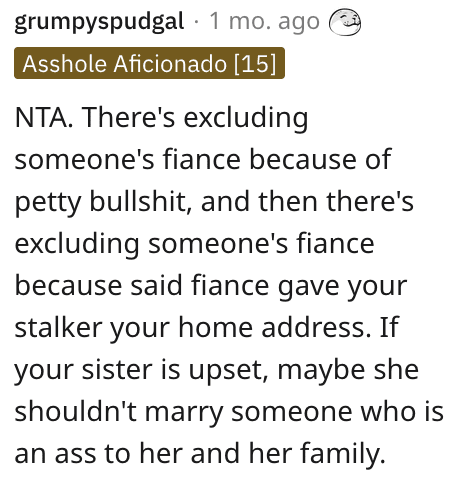 And this Reddit user agreed she’s NTA and they had a story about a stalker in their past. 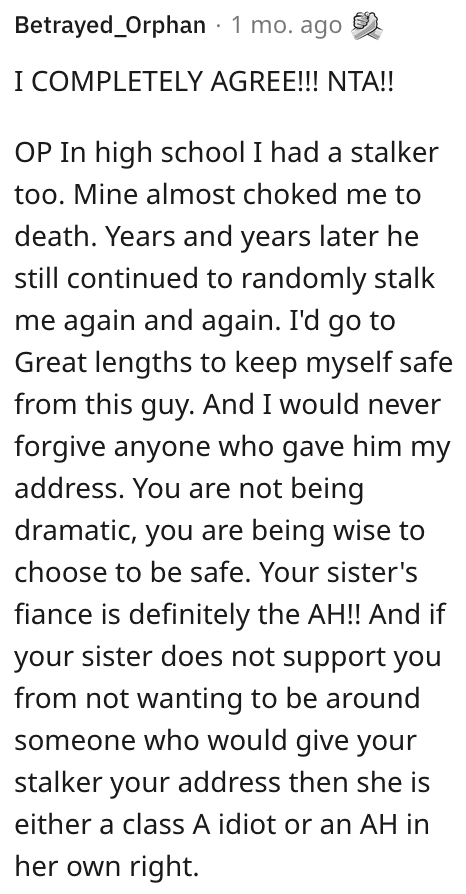 And this individual said her sister is going to learn the hard way what happens when you ignore red flags. 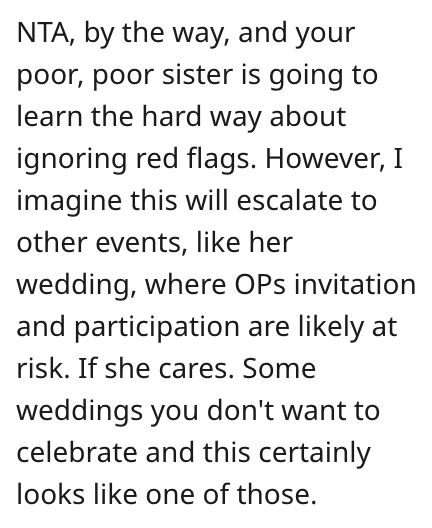