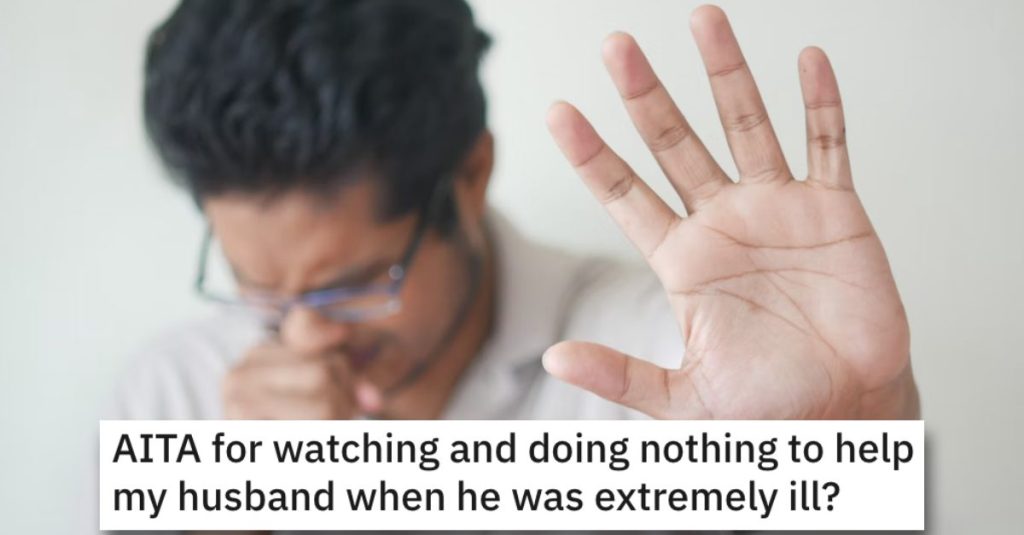 Is it the job of a person to take care of their spouse no matter what?

So check out this story from Reddit’s “Am I the A**hole?” page and let us know if you think this woman was wrong in this story.

AITA for watching and doing nothing to help my husband when he was extremely ill?

“My (27f) husband “Tim” (36m) has a serious dairy allergy. I’m talking about an actual immune system reaction, not intolerance. His allergy is serious enough to cause acute Enterocolitis, but he hasn’t needed an epi-pen since he was a kid.

I work full time and also have some seasonal work this holiday season because Tim has been without work, and money has been very tight. As a result, I barely get to rest. The holiday are especially hard, and I found myself getting just one day off every 2 weeks for almost 2 months straight. As you can imagine, that day off means the universe to me.

Now, Tim LOVES dairy, and will sometimes intentionally eat things which trigger his allergy. Lately, it’s gotten out of hand, with him going from one risky meal every 4-6 months, to every 2 or so weeks. In fact, it always seemed to coincidentally line up with my time off, and I found myself spending my one day taking care of him. Last week, I finally asked him if he was intentionally timing it to line up with my day off.

I fully expected him to say no, but he admitted that he was doing it to make sure that he’d have a nurse, and so he’d have someone close by in case he had an especially adverse reaction and needed a hospital. I was livid, and told him that he was selfish, robbing me of my rest. I said that if he made himself sick again, I wouldn’t take care of him. I’m exhausted and I need to decompress. He didn’t say much, so I thought he’d heard me.

Fast forward to Friday night. I get home from work, and a few minutes in, Tim gets a pizza delivered. I ask him why, when I’m making dinner and he shrugs. I ask if a large garlic Alfredo pizza is worth the pain, and remind him that I won’t be giving up my rest day again. He smirks and eats an entire slice while grinning at me. I left it at that and went back to my dinner.

Predictably, he got sick, profusely vomiting, retching and groaning from the intense cramping and diarrhea. I slept in the guest room to get away from the sound and smell. He called for me several times and I repeatedly told him no. Hours later, he was still sick and woke me up at the crack of dawn to go get him pedialyte and meds because he was very dehydrated and still in pain. I told him to order it in and asked him to get out and let me sleep.

He was still whimpering when I eventually got up to shower and eat. Again, I did nothing to help or comfort him. By evening, he was sulking, and by morning when I had to work, he was enraged. He yelled, and by the end of the day he’d told our friends and family that he nearly d**d and I neglected him. His family accused me of passively trying to k**l him.

His mom called, shouting that he could’ve had a life threatening reaction due to my petty actions, and that I’m a s**t wife for not minding his health. I’m starting to feel guilty because she’s right and he could’ve been seriously hurt.”

This reader said she’s NTA and that they hope this was a wake-up call to her husband. 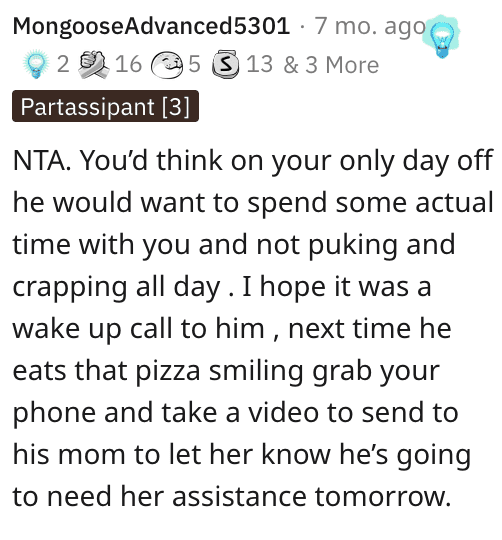 Another individual agreed and said this guy AND his family suck. 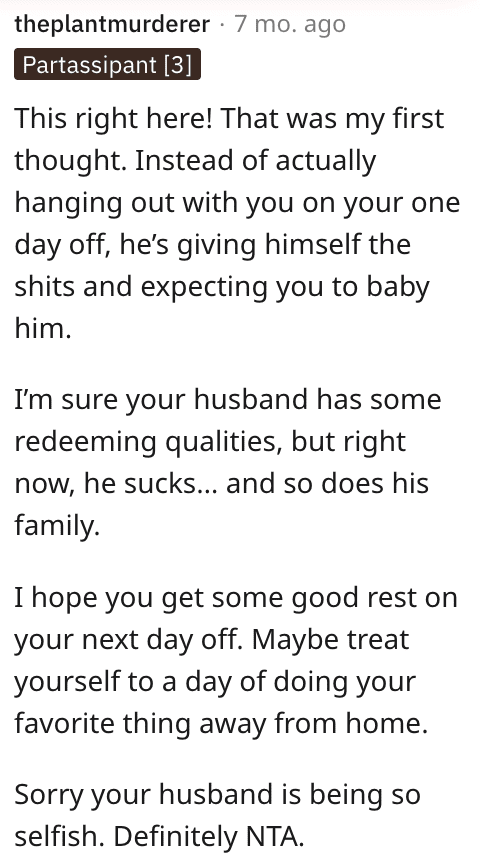 And this Reddit user said he did this on purpose. 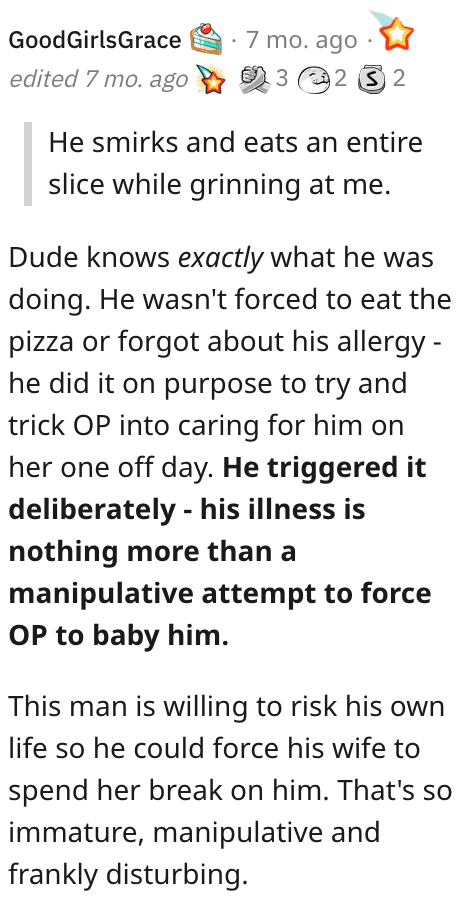