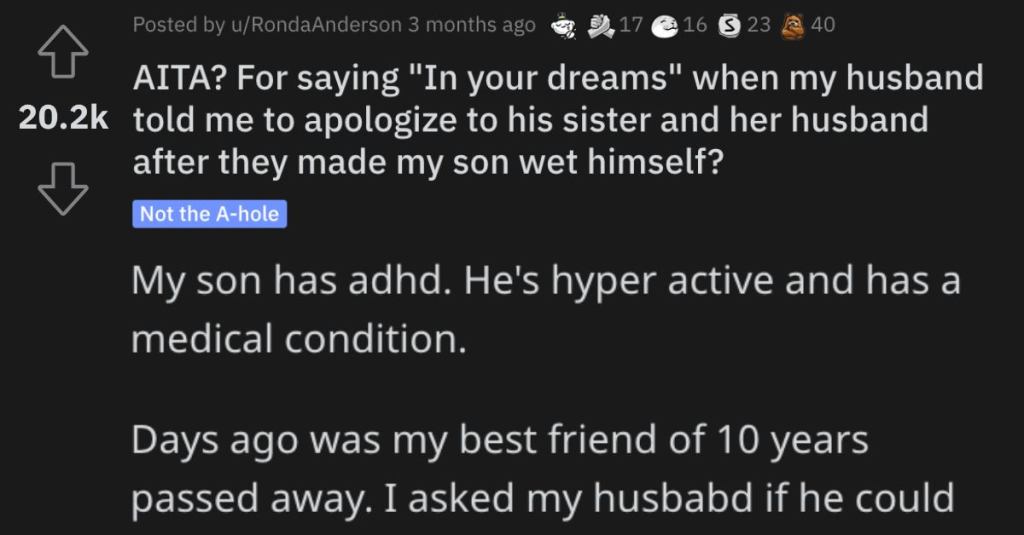 It’s another story from Reddit’s “Am I the A**hole?” page about someone having some major drama with their in-laws!

You know it! And you love it…

So let’s dig in and see what happened this time!

AITA For saying “In your dreams” when my husband told me to apologize to his sister and her husband after they made my son wet himself?

“My son has ADHD. He’s hyper active and has a medical condition.

Days ago was my best friend of 10 years passed away. I asked my husband if he could stay with my 4yo son so I could attend the funeral. My husband said yes but then took him over to his sister and her husband’s house to watch him without telling me.

At the funeral I received a text from my sil telling me to come get my son after he wet himself in her house. I was all kinds of shocked and confused and had many questions in mind like how the hell my son ended up at sil’s house after I left him with his stepdad. I called my husband but he didn’t answer or call back.

I went over there quickly and found my son crying. He was also wet I asked my sister inlaw and her husband what happened and they said my son was making so much noise while playing with the kids so they put him on time out. After that he told them he needed the bathroom but my sil’s husband said he couldn’t go to the bathroom while on time out and denied him access after he (my son) begged resulting in him peeing right where he was standing.

I lost it on her and her husband completely. Her husband for denying my son access to the bathroom and her for letting this happen and not doing anything about it. Her husband explained that he thought that my son like any other kid is old enough to hold it until timeout was over which was 90 minutes according to him.

I berated them for treating my son cruelly and denying him a simple request. I asked how could they do this to a child with a condition when they themselves are parents. Sil got offended I implied she and her husband were neglectful parents. we argued then I took my son and went home and my husband wasn’t there.

He then came home fuming asking why the hell I berated his sister and her husband after they’ve done him a favor and watched his stepson for him cause he had an “emergency”. I asked him if he was okay with the way they treated my son and he said no but the way I went about it was totally wrong and said I should apologize to them both after insulting them and their parenting skills in their own house when they were doing us a favor.

I said no no they did HIM a favor as I never asked them to watch my son. He said still I had to apologize but I loudly said “in your dreams” after how my son was treated. He was taken aback and described my behavior as juvenile for refusing to take responsibility for my actions.

Things escalated I had to take my son and go stay with a friend. My husband kept texting stuff like how I was avoiding confrontation and refusing to admit I overstepped etc.

He said he only expects me to come home AFTER I apologize to his sister and brother in law.”

This reader said that a 90-minute time out for a kid is way over the top.

And this person, who happens to be a behavior specialist, had some interesting perspective on this situation. 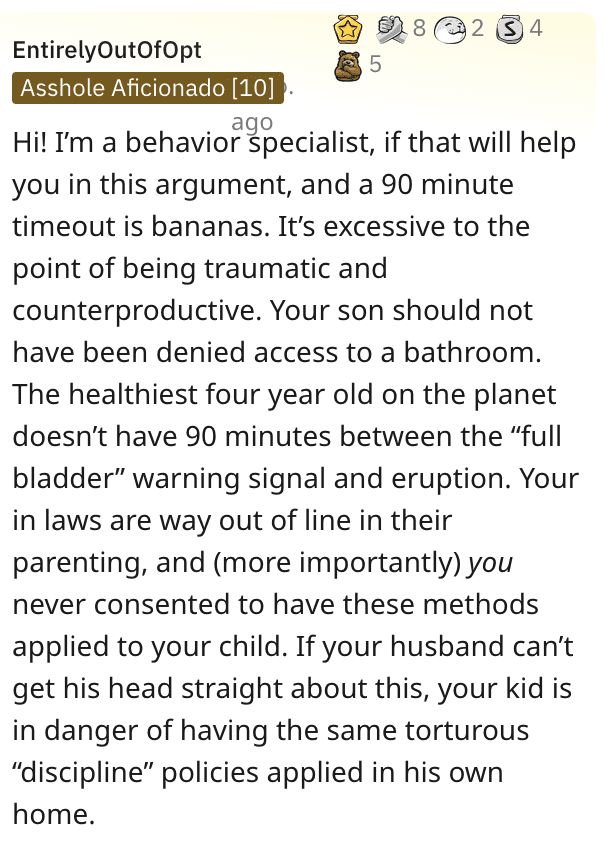 Another individual made a good point about how kids with ADHD might react in these situations. 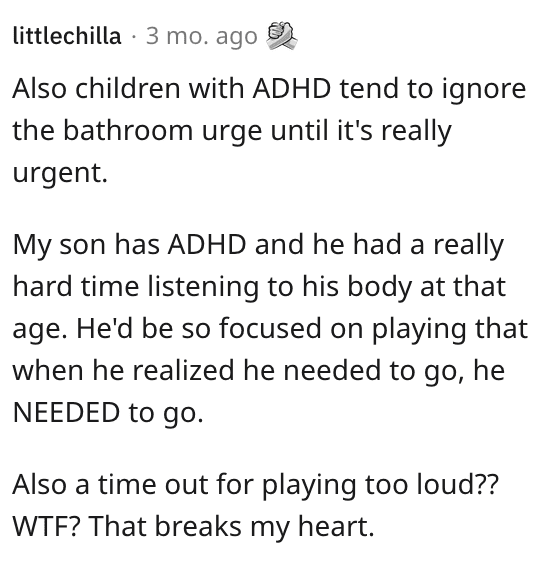