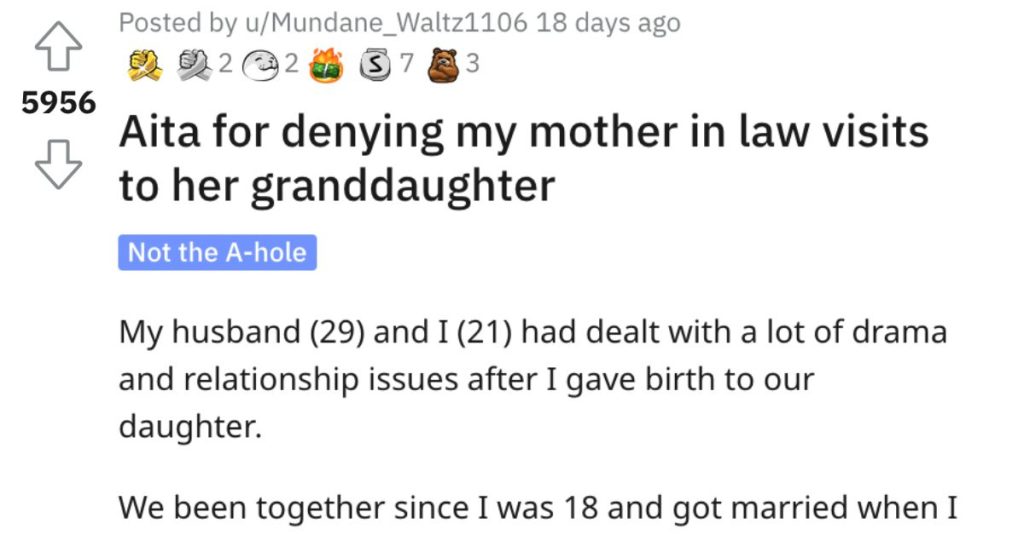 Woman Won’t Let Her Mother-In-Law Visit Her Grandchild. Is She Wrong?

I can’t tell you how many stories I see on the “Am I the A**hole?” page on Reddit that deal with drama between people and their in-laws…and their grandkids.

And here’s yet another installment for you to enjoy!

Take a look at what went down in this story and stick around to see what readers think about it.

AITA for denying my mother in law visits to her granddaughter?

“My husband (29) and I (21) had dealt with a lot of drama and relationship issues after I gave birth to our daughter.

We been together since I was 18 and got married when I was 19 we had a good trusting relationship but there was an shook to everyone when I gave birth to our daughter.

She didn’t have an appearance of having both of her parents being white, she had darker skin, brown eyes and came out with thick dark curly hair.

Everyone thought I cheated on my husband, which I never had, it was an awful moment of my life because I felt alone even my husband thought I cheated on him and left me in the hospital alone because his mom convinced him to leave, no one visited me because my Mil posted pictures of my daughter on social media calling me a cheater, I didn’t even see her take those pictures.

My husband didn’t reply to any of my texts ignoring my pleas to get an DNA test, I had to stay at my sisters house for a month until I was able to convince him to get one, which proved without a doubt that he was the father to my daughter.

My husband apologize profusely to me and allowed me back in our home and honestly ever since he treated me the way he did when I gave birth to our daughter I felt different towards my husband and even a little distance.

Even after the DNA test my MiL kept going on about how I cheated and called my daughter racial slurs and me every name in the book, she spead awful rumors about me and claim the DNA is fraudulent and said she’d never treat that child as her granddaughter.

Recently my mother in law asked to visit our daughter and referred to her as her granddaughter I don’t know what changed her but it made me feel uncomfortable so I refused.

My husband was angry at me that I did and thinks it gives a moment to help his mother bond with our daughter and even said it’s a child’s right to get to know their grandparents.

I don’t know I feel uncertain about this expressly since she never even apologized.

AITA for refusing my mother in law visits with her granddaughter?”

One reader that this woman is not to blame and that she should get a divorce from this guy ASAP. 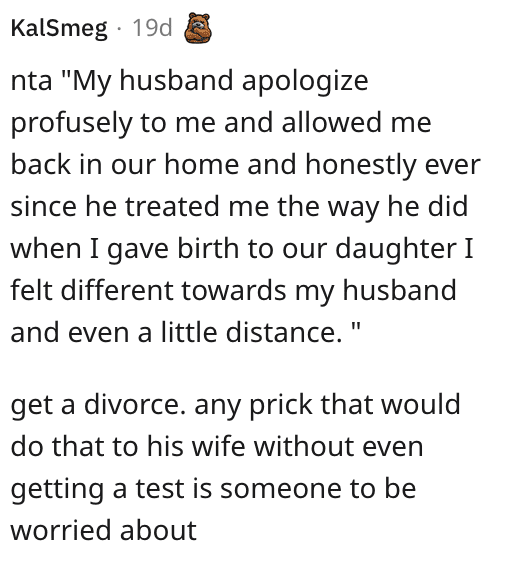 Another Reddit user said that this woman needs to be documenting this terrible behavior. 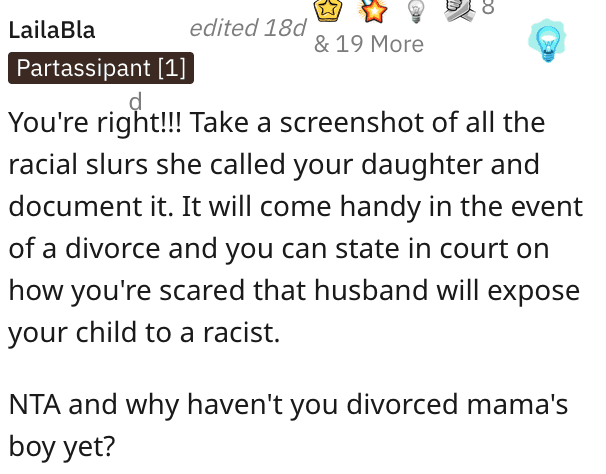 This reader said that the husband is a total a**hole AND a monster. 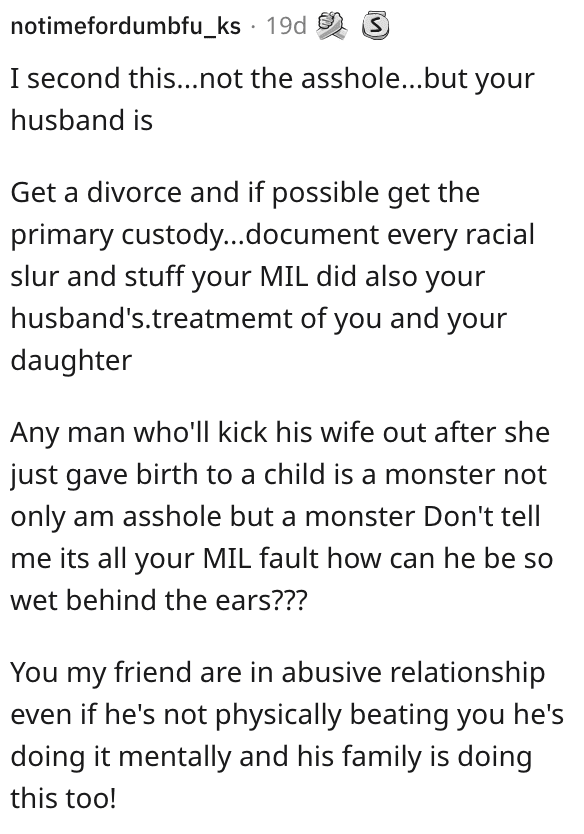 And this individual argued that the father and the grandmother are both awful people. 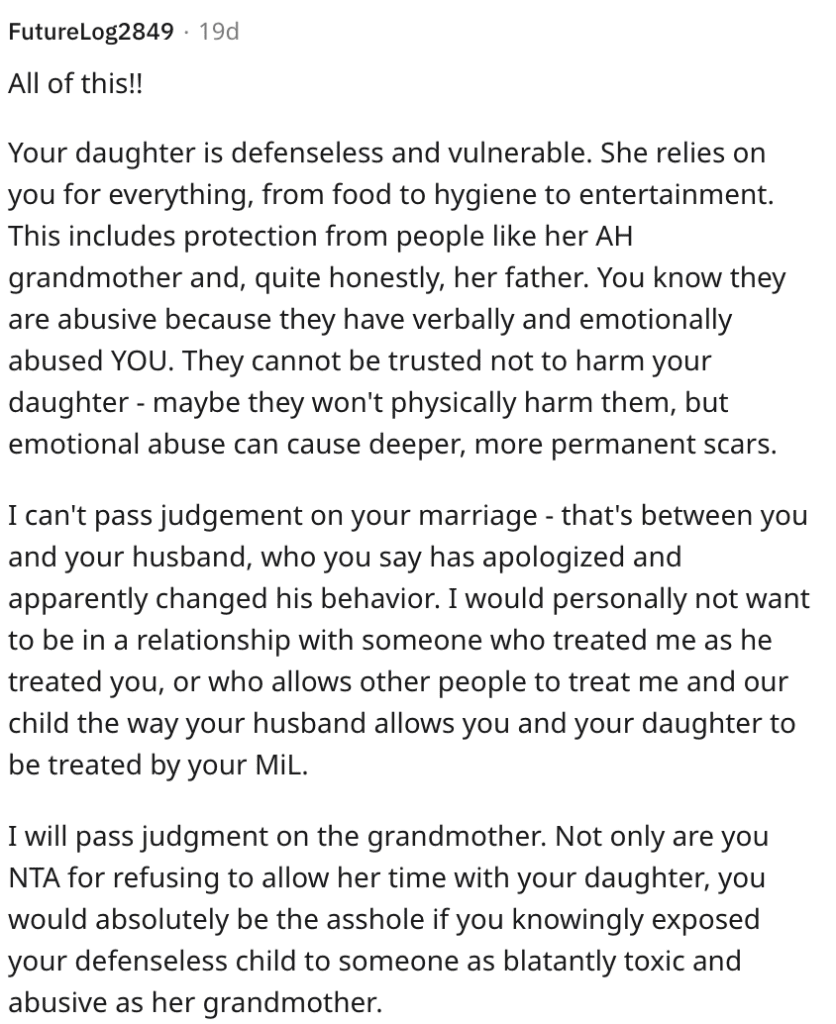