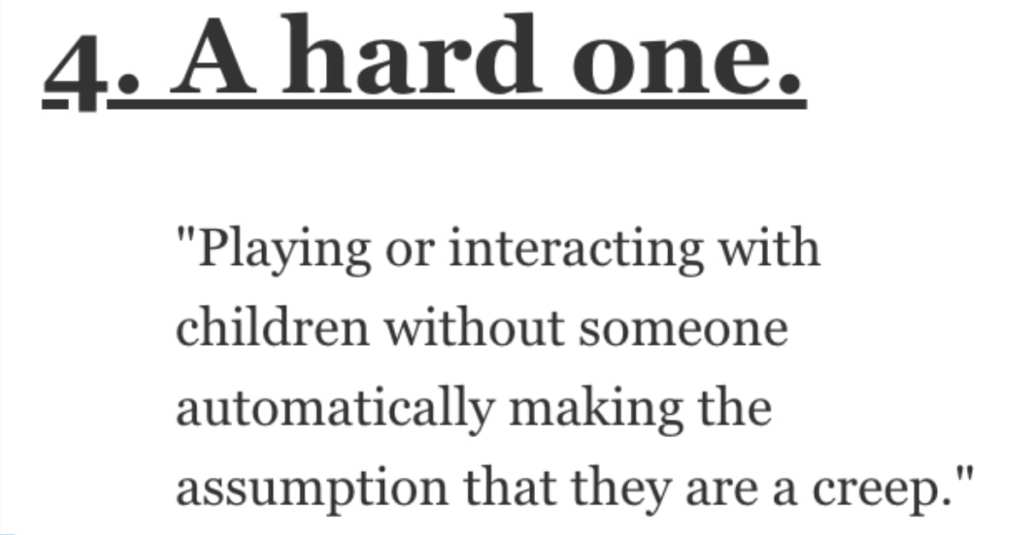 Women, What Do You Think Is Harder For Men? Let’s Check Out the Responses.

The battle of the s**ex continues!

Well, that might be a bit of an exaggeration, but I think we’re making some progress when men and women can both admit what’s more difficult for the other group.

Ladies, what do you think is harder for men?

Here’s what women had to say on AskReddit.

I have a lot of male friends (and a fiancee) who I’ve had to bend over backwards to get any kind of response when asking if they’re ok (especially when they Vaguebook and I want to make sure they’re ok).

I get some women are like this too, but realise it’s a lot harder for men because of the social standpoint of “Men need to be tough, so no showing feelings” kinda thing.”

“Finding support when being abused or after being s**ually assaulted.

We need to acknowledge that these things happen to men too, especially since female abusers will often take advantage of the fact that not a lot of people are going to take a man seriously if he says he’s in an unsafe situation. It’s really sickening.

Or how female pe**philes often get a pass to assault boys because people just assume like “oh they’re boys it probably just made them more popular”.”

“Height – I feel that is pretty standard.

Tall women are marketable as models, short women are seen as “cute” – no matter what, there is a “market” for either type of woman; however, short men are laughed at and made fun of – women will openly say they won’t date a man unless he’s 6’0.

My husband is shorter than me at about 5’5 and he grew up thinking he’d never find a woman.”

“Playing or interacting with children without someone automatically making the assumption that they are a creep.”

“Most men seem socially starved and only have one or two close friends, if that.”

6. Never thought of that.

As a woman with an ED who has been part of quite a few general ED and recovery focused communities, I have realized just how hard it is for men who are struggling to be taken seriously. EDs are commonly seen as “girl problems” and that’s just not true.

Men deal with body image difficulties, body dysmorphia, and EDs, too. They deserve just as much concern and care, and to be believed and helped just like women.”

I’m an archer and do so teaching here and there. Many men feel the need to ask for our heaviest bows (like 28 lbs max, because we aren’t stupid) and will refuse to go lighter even when it’s obvious it’s not working out.

They feel they have to, because society told them they’re not real men if they’re not physically strong.”

“I’ve noticed my male friends feel this extra pressure to find a job with a high salary, even if the job makes them unhappy, and regardless of having a family to support.

It seems like more of their identity is shaped by how much they make, rather than what they do or how much they enjoy their lives. My single female friends just seem happier in their jobs for different reasons.

I can’t imagine going through life feeling that extra pressure, and being told that my worth is defined by a number.”

We both get judgment for it but he gets a whole extra bit of toxic masculinity related judgment.”

“Just being human. Societies view of a man: Deal with it. Get things done. No complaining. Mind reading. No emotions. Baby sits his kids.

The reality is men are human. They have just as many emotions as women. They are allowed to love being around their kids or any kids. They are allowed to set outside the box we (society) put them. Man up, suck it up, don’t cry like a b**ch. These should all be abolished.

No wonder so mamy men and up lashing out. We tell them to bottle up their emotions their whole lives. Then you exact them to mindread and navigate a minefield of relationships. Which require emotional intellect.

It’s hard being a women. It’s also hard to be a man today. We all need to cut eachother a break.

Even looking at me too. Many women are assaulted by men. Many women have claimed r**e when its just not so. Everything has multiple perspectives. And having these doesn’t have to take away from either issues.

While as a women I can see the issues I face daily. I as a mother, partner and just human see the struggles men face every day. Just existing.”

“I’m a lifeguard, a trained professional lifeguard who has pulled people from the water, stopped some pretty major bleeding and sussesfuly done CPR on someone.

However when I tell someone I’m a lifeguard the response I get 90% of the time is “oh your a pe**phile obviously”. Really annoys me.”

Now we want to hear from some more women out there.

Tell us what you think is harder for men.

Please do it in the comments!