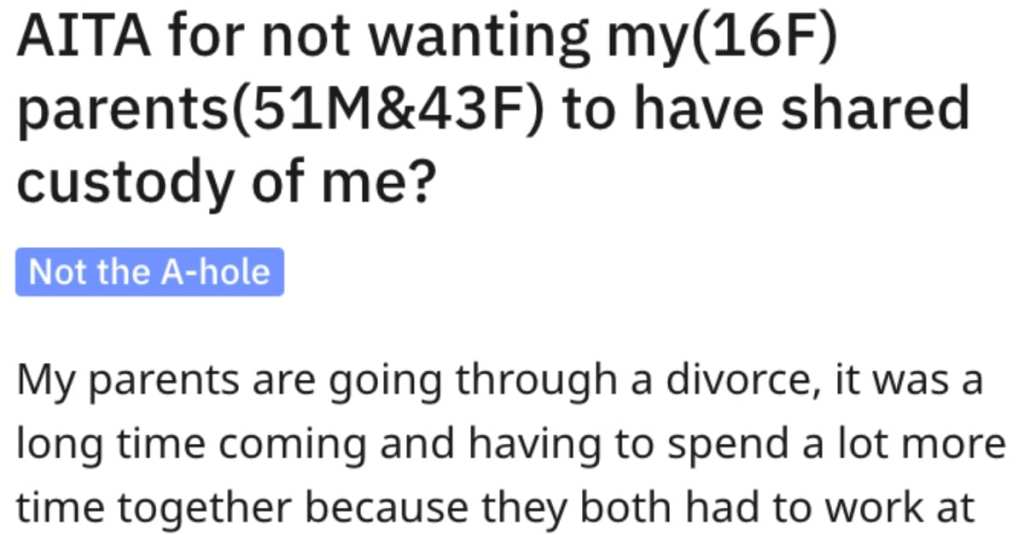 When parents get divorced, things get messy.

And they also get messy for the kids involved.

What teenage kid wants to deal with that along with all the other things they have to put up with during those difficult years?

And one 16-year-old took a firm stand with her parents and now she’s wondering if she’s treating one of them unfairly.

This young girl took to Reddit’s “Am I The *sshole” page to ask for advice from the readers there.

“My parents are going through a divorce, it was a long time coming and having to spend a lot more time together because they both had to work at home was the last straw.

I know I probably sound a bit uncaring/icey about all of this, but at this point I think everyone is better off if they seperate. The last 4 years have been marred with constant arguments, cheating and what not abd my mom in particular has been using me as an emotional support animal and I am sick of it.

By some miracle granted by the very gods they have been amicable at least when it comes to splitting their finances, stuff they own, all of that. My mom moved to her new boyfriend and my dad is keeping the house. Now that they got it all figured out they only had one thing left to decide and that is what to do with me.

Unfortunately they assumed I would want to spend one week at dads place the other at moms place and it’s just a no for me. When they said what they had decided to do I said no and explained I wanted to stay with dad, I gave the reason that I go to school here, my job is here and I don’t want it interrupted.

In reality though it has a lot more to do with me not liking my moms boyfriend one of the guys she cheated(Before you ask, dad cheated plenty of times too.) with who has 2 kids(No intererst in living with 2 random kids 50% of the time) of his own who live with him full time and I am just a lot closer to my dad in general, we are a lot more alike and he isn’t emotionally draining like mom is.

When I said this Mom broke down and begged me to stay with her full time instead, I said no, she threatened to go to court over this but my dad pointed out that was a waste of time because I am old enough to where my decision will pretty much be final.

That was last week, my moms side of the family has gotten involved since telling me I need to keep my moms feelings in to account and support her and my grandma has gone as far as to demand I go live with my mom instead.

I am aware I am not the most emphatetic person far from it so I have a tendency to only look at things from my own side, but my mom is clearly broken up about this, she calls me several times a day crying.

I want to know if I am the *sshole here, please be blunt.”

And here’s how readers on Reddit responded to the young lady.

This person made it very clear: it’s not this teenager’s job to deal with adult things in this divorce. 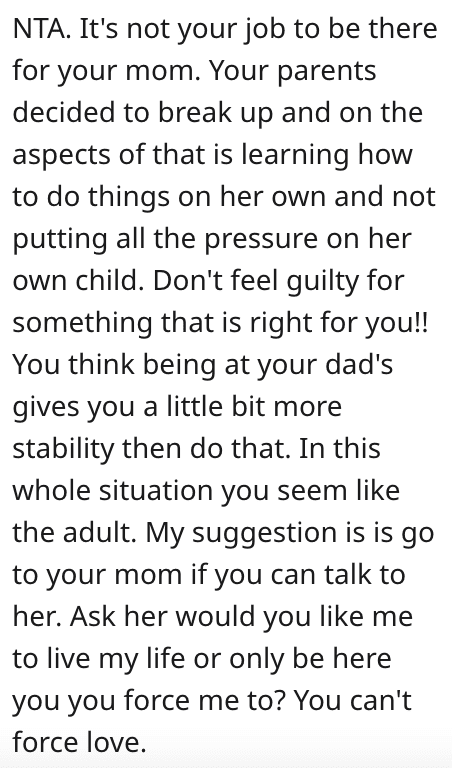 Another reader said that the girl’s mom is acting inappropriately and using the teenager as “an emotional support human.” 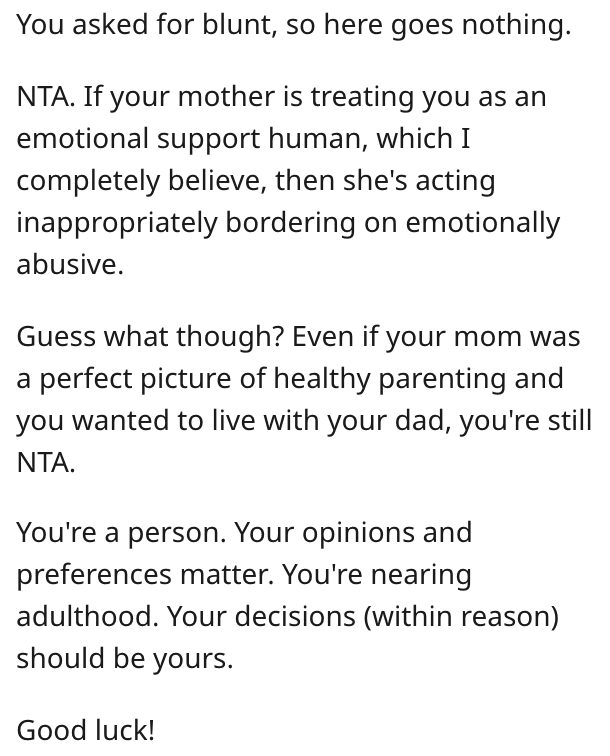 This person made a very good point: kids should have a bigger say about what happens in custody matters because the parents can be manipulative. 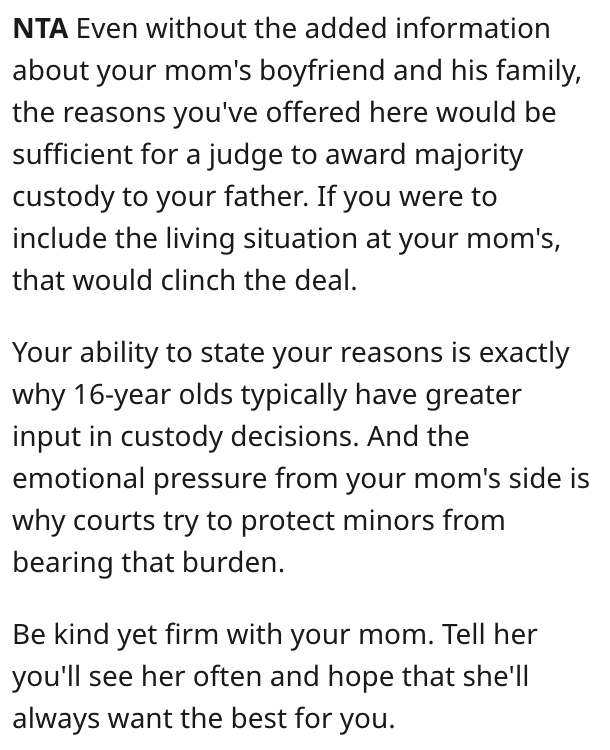 This Reddit user said that the girl is old enough to make these kinds of life decisions and that she shouldn’t let her mom guilt her into doing anything she doesn’t want to do. 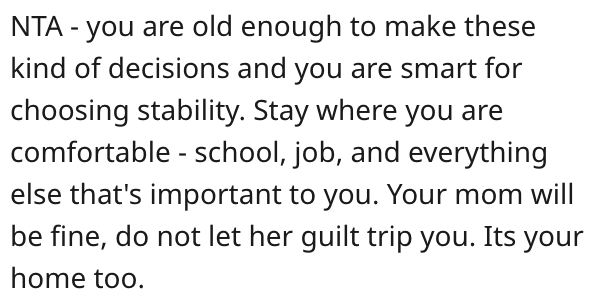 And lastly, another person said that parents should always make the right decision when it comes to their kids, even if that means stepping away a little bit. 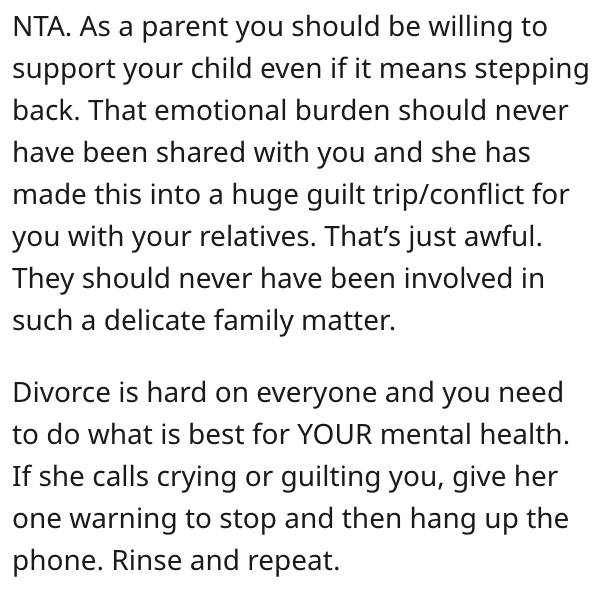 That’s definitely a tough situation for a young kid.

Is this kid making a good decision or are they being too harsh?

Talk to us in the comments and let us know what you think. Thanks!